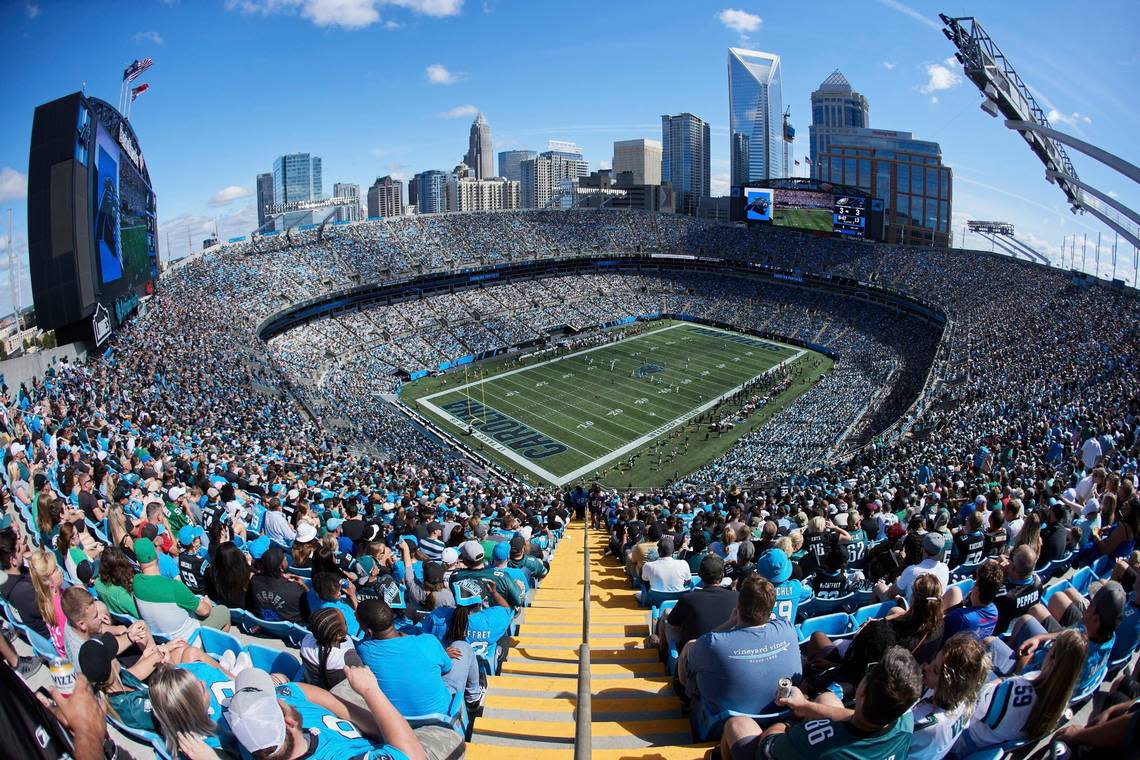 The behavior of some Philadelphia Eagles fans fell way out of bounds at Sunday’s NFL game against the Carolina Panthers at Bank of America Stadium in Charlotte.

A fan wearing a green hat took off his shirt after he ran onto the field just before half time, The Charlotte Observer reported.

After the fan sat and laid down, security escorted him away with his hands behind his back.

And a TikTok video that has drawn 10.7 million views shows three Charlotte-Mecklenburg Police Department officers knocking on the door of a men’s bathroom stall before a man in an Eagles T-shirt emerges with a young woman.

Fans gathered around the stall said the two were having sex. Police on Tuesday wouldn’t say if they knew what transpired in the stall.

“CMPD officers were requested to respond to a restroom inside Bank of America Stadium due to reports of a female inside one of the stalls,” according to a police statement to the media. “After locating the male and female involved, they were subsequently asked to leave the property for violating Bank of America Stadium policy. There were no arrests associated with this incident.”

One of the officers is shown handcuffing the man as another officer stands close by, according to a review of several video clips by the Observer.

A third officer walks the woman away. She is wearing a No. 17 replica jersey of former Eagles All-Pro wide receiver and South Carolina native Alshon Jeffery and doesn’t appear to have been handcuffed.

Neither the names nor the ages of the two people are known.

Judging by the chorus of hooting and shouting, dozens of fans were gathered at the stall before the officers arrived.

“Things you see at Panthers games,” reads the video headline spoken aloud by a woman.

“I’ve never seen that ever before,” a man can be heard saying in the video.

The video appears on the private TikTok account of a person with the handle “hickleberry,” who has 16,900 followers.

Under North Carolina law, someone having sex in a public setting could face a misdemeanor charge of indecent exposure.

Zaniness has broken out before on concourses during Panthers games.

In September 2019, Panthers fans accused of participating in a brawl during a weather delay of a Thursday night game were ejected and banned indefinitely from the stadium, team officials said at the time.

The fight in a crowded concourse was caught on a 23-second video that quickly spread across the internet, the Observer reported.

And, in sort of related Panthers-bathroom news, back in November 2005, two members of the TopCats cheerleaders were arrested after getting into a fight at a nightclub in Tampa, Fla., the Observer reported at the time. Witnesses told police the two cheerleaders were engaged in sexual activity in a bathroom stall, which the women and their attorneys denied.

The Panthers fired both of the women.

Covid-19: Public sector pay freeze to be lifted and new US travel rules