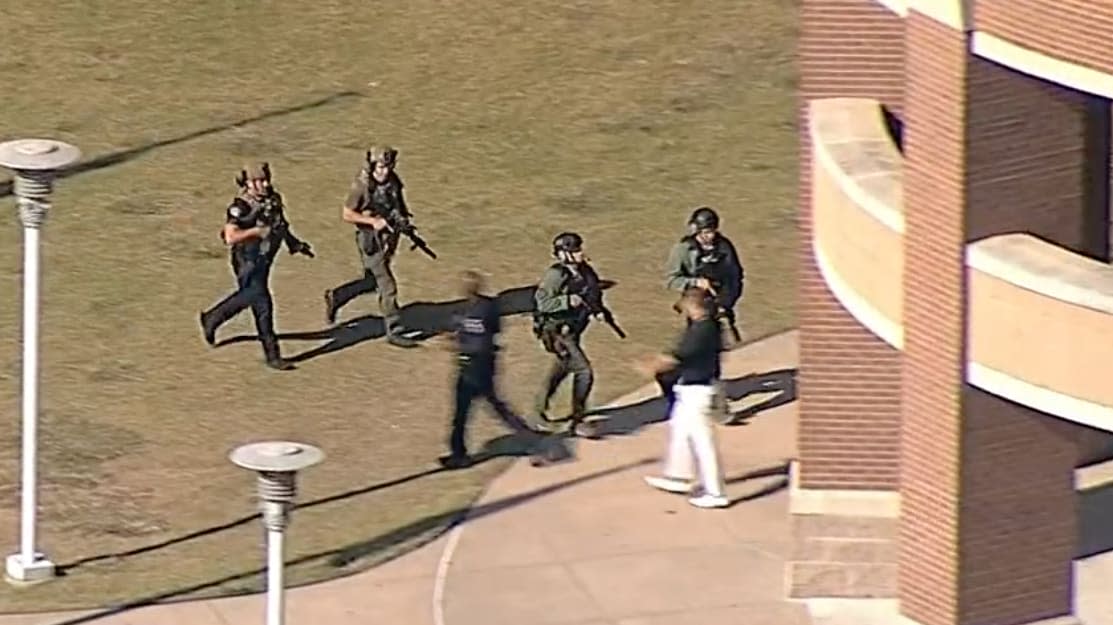 Police have arrested an 18-year-old student after he allegedly got into a fight at a north Texas high school on Wednesday morning, then drew a gun and opened fire.

The Arlington Police Department said that three students and one 25-year-old adult were injured in an incident that forced hundreds of students and staff at Mansfield Timberview High School into lockdown. A 15-year-old boy is in critical condition, while the other three are in good condition or have already been treated.

“This is not a random act of violence… this is a student that got into a fight and drew a weapon,” Arlington Police assistant chief Kevin Kolbye said during a Wednesday press conference.

Timothy George Simpkins, the suspected shooter, fled the scene in a 2018 Silver Dodge Charge, sparking a huge manhunt. He was taken into custody about two hours later, police said. He has been charged with multiple counts of aggravated assault with a gun.

We are looking for a shooting suspect in today’s incident at @mansfieldisd Timberview School. Please call 911 if you know the whereabouts of 18-year old Timothy George Simpkins who may be driving a 2018 Silver Dodge Charger with license plate PFY-6260. pic.twitter.com/npaNVBDXRp

“He is currently in the police station at OTT Cribbs in Arlington, Texas, and detectives are talking to him,” Kolbye said, adding that all students who were in school at the time of the shooting have been accounted for.

“We know that this is a tragedy, a traumatic incident for these high school kids,” he added.

Police were first called to the school in Arlington, located between Dallas and Fort Worth, at around 9:15 a.m. after the fight erupted.

Of the four people that were injured, three were hospitalized and one declined treatment. A pregnant woman was pushed over during the “traumatic incident” and was treated at the scene, Kolbye said.

Just after 11 a.m. local time, the Mansfield Independent School District said that the school, which has a student population of about 2,000, had been given the “all clear” and there was no longer an active threat.

An FBI spokesperson told The Daily Beast that federal agents from the Dallas field office are also on the scene, but Arlington police is leading the investigation.

Rosa Linares, whose daughter was in the building during the shooting, told KXAS-TV that kids were “overwhelmed” as they sat locked in their classrooms.

“What went through my mind basically was, ‘Is my daughter safe? Is she going to continue to be safe?’” Linares said.

Read more at The Daily Beast.

Get our top stories in your inbox every day. Sign up now!

Daily Beast Membership: Beast Inside goes deeper on the stories that matter to you. Learn more.

Hate haunted houses? Learn about the science behind fear.

The Southwest’s most important river is drying up

‘We may have vaccines for children 5 to 11, possibly as soon as next week,’ Chicago health official says

Marriott unveils major changes to its loyalty program for 2022