The US is returning to early pandemic surges and restrictions. It’s time to compel people to do the right thing, expert says

It has been months since Covid-19 vaccines were made available to most of the US population and things are looking much more like they did early in the pandemic: cases are surging, events are being postponed and restrictions are back.

The culprit is the insufficient rate of vaccinations, and a solution may be to mandate that people take action to protect themselves and their community, director of the Vaccine Education Center at Children’s Hospital of Philadelphia and a member of the US Food and Drug Administration’s vaccine advisory committee, Dr. Paul Offit said.

“We’ve hit a wall,” Offit told CNN’s Wolf Blitzer Wednesday. “We’ve gotten to the point where you have to compel people to do the right thing.”

Initial enthusiasm to get vaccinated has dwindled and many who haven’t done so express hesitancy or resistance to getting vaccinated. Currently, 49.3% of the US population is fully vaccinated, according to the US Centers for Disease Control and Prevention – a far cry from the 70 to 85% that experts have estimated would be needed to slow or stop the spread of the virus.

“There was a time we were giving three million doses a day. If we’d stayed that course, we could be at roughly 80% population immunity,” Offit said.

And case numbers are on the rise again. There are 49 states seeing a surge in cases, and 35 those are seeing a seven-day average of new cases at least 50% greater than last week, according to data from Johns Hopkins University.

Wednesday’s Washington Nationals MLB game against the Philadelphia Phillies was postponed after 12 members of the Nationals – four players and eight staff members – tested positive for Covid-19.

The climbing case numbers have pushed some areas to return to mask mandates.

The mayor of Atlanta issued an executive order Wednesday requiring masks in all indoor public places, state employees and visitors in Kansas will be required to wear masks indoors starting Monday and the Pentagon implemented an indoor mask mandate regardless of vaccination status.

But other local leaders are pushing back against the return to pre-vaccine precautions.

Georgia Governor Brian Kemp tweeted Wednesday that he will not issue any mask mandates or lockdowns in the state.

Georgia is one of the 35 states where new cases this week are more than 50% higher than last week. Currently 38.5% of the state’s population is fully vaccinated, according to the CDC.

“The biggest obstacle to getting more people vaccinated and the country returning to normal is the mixed messages from Washington D.C. and those with partisan agendas. In Georgia, we have been consistent,” Kemp said in his tweets.

Health experts have said the changes in recommendations, like those made to mask guidance, are the result of under vaccination and the Delta variant changing the landscape of the pandemic.

Despite education efforts, increased accessibility and financial incentives in many places, vaccination rates have slowed dramatically – a worrying trend for health experts who say vaccination is the best hope to end the pandemic.

Overall vaccine hesitancy has decreased during the past couple of months, but some Republicans are more likely to refuse a Covid-19 vaccine now than they were in March, according to survey data published Wednesday by the Public Religion Research Institute and the Interfaith Youth Core.

One motivator that might help overcome the hesitancy, some officials and experts have suggested, is vaccine mandates. And many places have begun implementing them.

The New York State Court System announced Wednesday that all employees will have to undergo regular Covid-19 testing if they are not already vaccinated, according to a statement. And the Durst Organization, one of New York City’s largest real estate developers, said employees who remain unvaccinated after Labor Day will be fired. 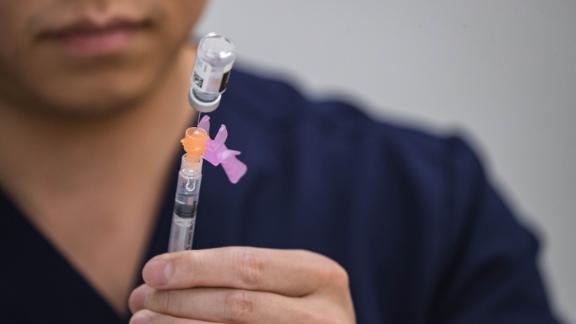 The Baylor Scott & White Health healthcare system in Texas announced Wednesday all 49,000+ employees, volunteers, vendors and students will be required to be vaccinated against Covid-19 by October.

“The Delta variant is the most contagious and dangerous strain we have seen to date, leading to exponentially increasing rates of severe illness and hospitalization. The overwhelming majority of these cases are among the unvaccinated,” the company said in a statement.

At Maui Memorial Medical Center, visitors are now required to be vaccinated against Covid-19 due to a surge on the island, hospital CEO Michael Rembis told CNN affiliate Hawaii News Now.

Pfizer released new data Wednesday suggesting a third dose of its vaccine can “strongly” boost protection against the Delta variant – beyond the protection afforded by the standard two doses.

The data, which included 23 people, has not yet been peer-reviewed or published.

But US Surgeon General Dr. Vivek Murthy told CNN Wednesday that fully vaccinated people don’t need to get a booster at this point, if ever. And any decision on whether that will change will be made by agencies such as the CDC and the US Food and Drug Administration, he said.

“This data from Pfizer, we’ve been in talks with them about what they’re seeing with regard to their studies related to boosters,” Murthy told CNN’s “Newsroom” when asked about the data release. “But at this point, I want to be very clear: People do not need to go out and get a booster shot.”

Murthy also said whether it’d be ethical to recommend a third shot while there is a major vaccine supply shortage in the developing world was a “critical question.” The ability to reduce the likelihood of future variants developing depends on tamping down spread around the world, he said.

Pfizer anticipates submitting data on a third dose of its coronavirus vaccine to the FDA as soon as next month, one of its research and development leaders said during a company earnings call Wednesday.

The CDC says the weekly rate of newly vaccinated young adults has slowed. Here’s one big reason why.

How much money could Biden raise for infrastructure through tougher IRS enforcement? It’s not clear