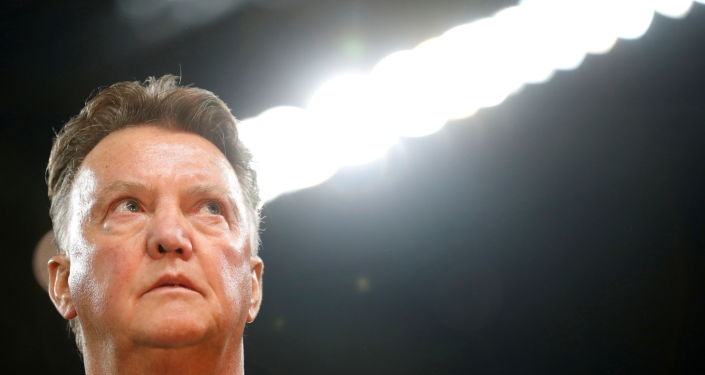 Former Manchester United defender Rafael da Silva and ex-manager Louis van Gaal are at loggerheads once again after the Brazilian international took another jibe at his former boss at the famed English club.

Rafael, who left United in August 2015, claimed that van Gaal made no secret of his dislike of Brazilian players as he asked him to quit the iconic club.

According to him, van Gaal “hates” Brazilian footballers.

The 31-year-old had a torrid relationship with van Gaal and once called him “one of the worst” managers he had worked with.

Before the Dutchman joined United, Rafael was nearly a permanent fixture in United’s playing 11. But van Gaal’s arrival at Old Trafford led to a shocking change, with the Brazilian star featuring in the club’s starting line-up only 11 times during the 2014-15 season.

“I never got an explanation. When van Gaal arrived, he just said: ‘OK, you leave'”, Rafael told American sports website The Athletic on Thursday.

“He came in with an idea of the players he wanted, and didn’t want, and set about making those changes instantly. He never explained it to me.”

“But I’ve heard a few explanations from other people and, even before he arrived, everyone was telling me, ‘He hates Brazilians'”, he added.

“I don’t know if it’s true or not but I heard it started with Rivaldo when van Gaal was manager of Barcelona. He put Rivaldo on the bench and Rivaldo started speaking badly of him, trying to sack him, you know. After that, they say he started to hate Brazilians: ‘Those Brazilians love to sack managers’, something like that”.

Former Ballon d’Or winner Rivaldo and van Gaal had a series of public spats during their time at Barcelona from 1997 to 2000.

The main reason behind their turbulent relationship was Rivaldo’s playing position in the side. While van Gaal wanted the Brazilian playmaker to become a part of the left wing, Rivaldo insisted on being deployed in the central midfield.

Even though van Gaal left the Catalan giants for a brief period due to his disagreements with Rivaldo, when he resumed Barcelona’s charge in 2002, the club told the Brazil star to leave. Rivaldo later signed a deal with Serie A side AC Milan.

However, the Dutchman denied Rafael’s allegations before hitting out at him for questioning his decisions at United.

“You can’t imagine a human being or coach — if he doesn’t think one Brazilian is professional — thinks the same of the rest of the population of Brazil”, van Gaal said in response to whether he hated Brazilians or not.

“He [Rafael] was played out of the team by Antonio Valencia. Honestly, he lost the battle with Valencia. I transformed Valencia from a right-winger to a right full-back”.

“Valencia also played as a right full-back after my dismissal for the coach Jose Mourinho, so was my choice a bad one?”

Van Gaal’s lack of success at Old Trafford cost him his job in 2016 as he failed to lead United to a Premier League title during his two-year reign.

He has not taken a managerial position at any other club since his departure from United.

Venus May Still Be Geologically Active, as Scientists Find Sliding Chunks of Crust on Its Surface