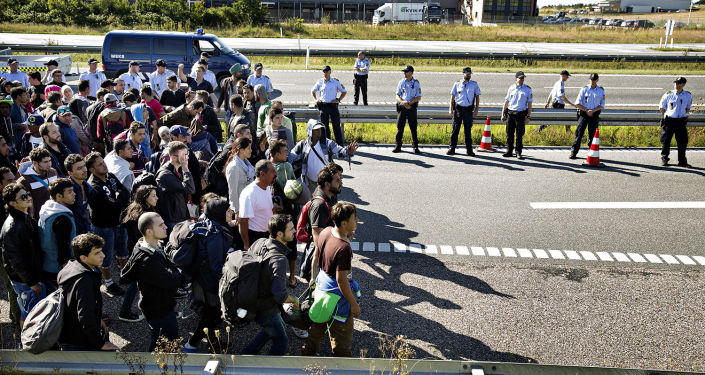 Denmark’s current attempts to return scores of Syrians to Damascus may prompt other countries to follow suit, lawyers from the group Guernica 37 has warned.

The organisation added that they are preparing a lawsuit against the Danish government, which will be submitted to the European Сourt of Human Rights (ECHR).

Guernica 37 is a London-based international justice chamber that deals with pro-bono and affordable assistance related to transnational legal and human rights cases.

© AP Photo / Ernst van Norde
A group of refugees and migrants who were walking north stand on the highway in southern Denmark on Wednesday, Sept. 9, 2015

According to Guernica 37’s strategy note obtained by The Guardian, the current situation in Denmark is “deeply concerning” in terms of security.

“While the risk of direct conflict-related violence may have diminished in some parts of Syria, the risk of political violence remains as great as ever, and refugees returning from Europe are being targeted by regime security forces”, the note stressed.

The document argued that “if the Danish government’s efforts to forcibly return refugees to Syria is successful, it will set a dangerous precedent, which several other European states are likely to follow”.

Carl Buckley, the barrister leading Guernica 37’s efforts, told The Guardian that turning to the ECHR in Strasbourg is just one of several options the affected Syrians may pick if the appeals procedure in Denmark fails.

“The ECHR is a slow-moving system, but we would make an application asking the court to consider interim measures, which would involve ordering Denmark to stop revoking residencies until a substantive complaint has been considered and ruled upon. In theory that could happen pretty quickly. And while it would only apply to one individual’s case, we would hope that Denmark would consider it carefully or they will end up with thousands of similar applications”, Buckley said.

Earlier this year, Denmark became the first European country to strip residence permits from around 1,200 Syrian refugees living in the country. Foreign Minister Jeppe Kofod suggested that while the civil war is still going on in many places in Syria, there are parts of the country where the situation is “different”.

He said the Danish authorities believe the Syrian capital Damascus is a safe area to return to, a view that is, however, opposed by the UN and Amnesty International.

“Return assumes that conditions are consistently stable. We cannot see that anywhere in Syria”, Elisabeth Haslund, spokesperson for the UN High Commissioner for Refugees (UNHCR), told reporters in mid-April.

She voiced concern over what she called a clear change in Danish refugee policy, when the authorities tend to reconsider the basis for temporary residence permits more often than before.

The Danish policy drew similar objections from Amnesty International, which emphasised that the returning Syrians may be at risk of serious human rights violations.

In total, there are about 35,000 Syrians now living in Denmark, a nation of 5.8 million. Most of the Syrian refugees have arrived in Denmark over the past decade amid the simmering conflict, that left 6.6 million internally displaced, according to UN figures.