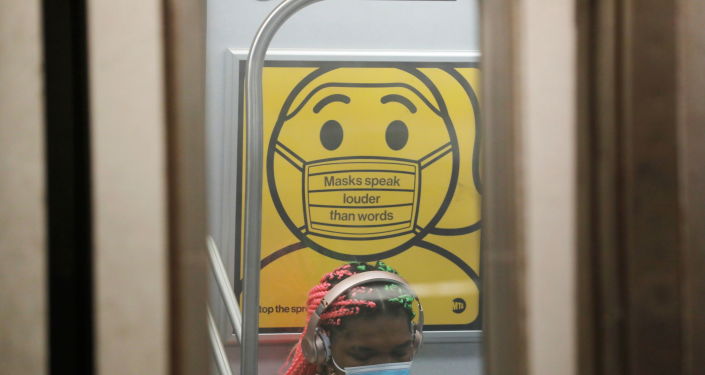 US Senator Ted Cruz (R-TX) has slammed “absurd” new Centres for Disease Control and Prevention (CDC) guidelines that direct those fully vaccinated against COVID-19 to once again mask-up indoors. The lawmaker argued that the CDC is no longer perceived as an organisation, whose decisions are based on science.

Cruz suggested that the problem with the CDC going back and forth on its promise that people, who received a jab would get back to normal life, stems from the organisation’s shift from science to politics in its decisionmaking. The GOP senator further suggested that Dr Anthony Fauci, who has been leading anti-COVID efforts in the country, was the one to blame for the “politicisation” of the fight against the pandemic.

“The CDC has destroyed their credibility. A year and a half ago the CDC was one of the most respected scientific organisations in the world and they allowed themselves to be politicised […] and right now their credibility is in tatters because they behave more like an arm of the DNC than an actual, serious medical and scientific organisation”, Cruz said in an interview with Fox News host Sean Hannity.

On July 16th, CDC Director Rochelle Walensky shared that 97% of all COVID-19 hospitalisations are people, who didn’t get the vaccine, calling the situation a “pandemic of the unvaccinated”.

Fast forward two weeks, Senator Ted Cruz argued, and vaccines are still effective in protecting against the coronavirus (or rather against the complications caused by it), but the only thing that has allegedly changed is Democrats’ willingness to make people wear masks again.

“It’s pure politics. Yesterday vaccines worked. Today they still work but, as a political matter, the Democrats decided they want to control your lives. They want everyone to wear a mask”, Cruz said.

The Republican lawmaker further stated that the federal government should be stripped of the authority of issuing such mandates for the entire country. Cruz argued that a decision to wear a mask or to vaccinate should be made by every person themselves, rather than by the government, adding that he himself and his family voluntarily got anti-COVID shots.

Ted Cruz is not the only member of the Republican Party to oppose the new CDC guidelines. Five GOP state governors, Greg Abbott of Texas, Ron DeSantis of Florida, Kim Reynolds of Iowa, Doug Ducey of Arizona, and Pete Ricketts of Nebraska all criticised the new rule mandating vaccinated people to put their masks on indoors. They argued that such decisions go against scientific findings regarding the disease, undermine efforts to vaccinate people, and throw the promise of a normal life after taking a jab out of the window.

The mass vaccination campaign in the US was indeed advertised under the banner of it being the fastest way to return to normalcy. Even though none of the existing vaccines protects a person from catching COVID-19, they prevent the disease from taking a serious toll on a person’s health, drastically reducing the mortality rate in vaccinated people. Over 69% of adult US citizens have received at least one shot of the vaccine, giving them some degree of protection, while 60.2% have been fully vaccinated.

The CDC director herself stated on 1 July that vaccinated individuals are not required to wear masks indoors. At the same time, with surging new daily cases and the highly contagious Delta strain of the coronavirus being responsible for over 50% of all infections, the CDC decided to update its guidelines requiring people to mask-up regardless of their vaccination status.

How Joe Biden Broke Royal Protocol When He Visited the Queen