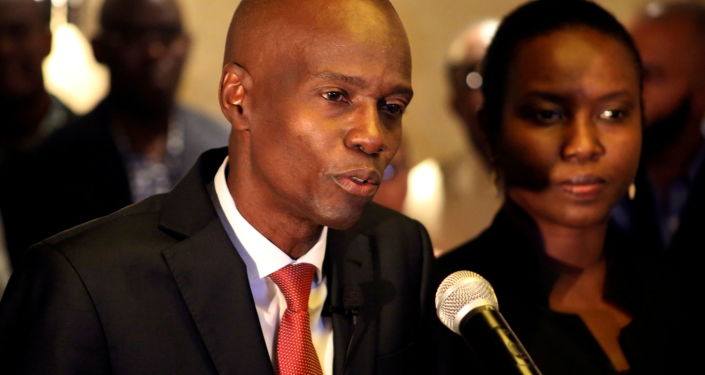 Speaking at the funeral of Haiti’s President Jovenel Moise in the northern city of Cap-Haitien on Friday, his widow Martine demanded justice for her husband and recalled that those who ordered his murder are still at large.

“They are there looking at us and listening to us and they hope to make us afraid. Their blood-lust is not over yet”, she said, adding that the gunmen “plotted against” her dear one and “sentenced” him “to death”.

The widow concluded her brief speech with an apparent promise to find Moise’s killers, saying, “Go in peace, my love. Go with the feeling of accomplishment. We will do the rest”.

© REUTERS / RICARDO ARDUENGO
Pallbearers in military attire carry the coffin holding the body of late Haitian President Jovenel Moise after he was shot dead at his home in Port-au-Prince earlier this month, in Cap-Haitien, July 23, 2021. REUTERS/Ricardo Arduengo

The Friday event was interrupted by gunfire that prompted the US and delegation to quickly leave the scene amid reports that gunshots may have been fired by law enforcement personnel who were trying to disperse protesters that have been demonstrating outside the funeral, calling for justice for the assassinated president.

White House National Security Adviser Jake Sullivan said later on Friday that “the presidential delegation to the funeral of President Moise is safe and accounted for, and those traveling from Washington, DC have arrived safely back in the United States”

He added that Washington remains “deeply concerned” about the ongoing situation in Haiti and urged all parties to engage with one another peacefully. The adviser pledged that the US will continue providing assistance such as equipment, training, and investigative help to the Haitian government and police.

The funeral followed Haiti’s Communications Secretary Frantz Exantus saying in a statement earlier this week that Martine Moise returned to Haiti after undergoing treatment at a Miami hospital.

On 7 July, President Moise, was killed and his wife was seriously wounded in an attack on their home on the outskirts of Port-au-Prince. Haitian police have identified 28 suspects in the assassination, and 26 of them have already been detained, including 18 Colombians, five Haitians and three American citizens.

India Cuts Off Communications, Internet in Kashmir Due to Terrorists, Reports Say