Farmer Leader Rakesh Tikait: Farm Laws Will Be Scrapped at Any Cost 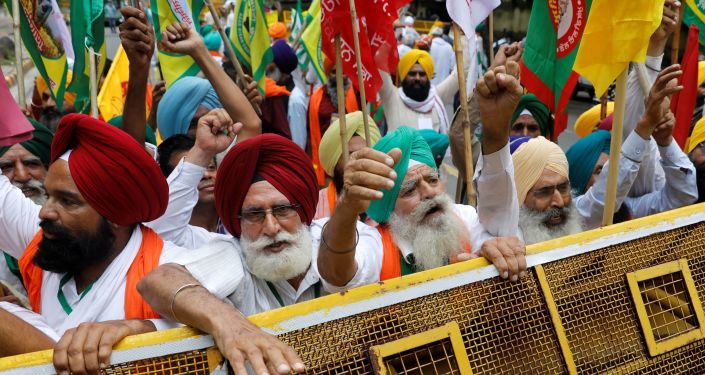 As India’s Monsoon Session of parliament began this week, 240 farmers have been staging protests near the Jantar Mantar observatory, which is barely two kilometres away from the parliament, demanding to nullify the farm laws. The farmers will hold protests till 9 August, daily.

Sputnik spoke with Rakesh Tikait, spokesperson of Bharatiya Kisan Union (BKU), farmer union, who re-affirms that farmers will protest against the farm laws until they are not scrapped. He says that if needed, the demonstrators will sit at Delhi’s border until 2024 when the next parliamentary election will be held.

Sputnik: Farmers have been protesting at the outskirts of the Delhi border for the past seven months. Now, you’re protesting outside the Parliament. How will it make a difference?

Rakesh Tikait: We have to do something to raise our voice, we cannot sit on our hands. So, we decided to hold a parallel ‘Kisan Sansad’ (Farmers’ Parliament) at Jantar Mantar, which is hardly two kilometres away from the Indian Parliament, to remind the government of our long-pending demands.

Here, we have created a replica of the Parliament. On a daily basis, we appoint speakers and deputy speakers, just like the original ones have.  And, our Parliament will hear the grievances of every single farmer.

Sputnik: This protest was started with hundreds of farmers. Now, it has shaped into the federally governing government versus farmers and political parties.

Rakesh Tikait: Why do we stop people from supporting us? If BJP leaders want to come and join our protest, they are more than welcome. We are welcoming every leader, activist, but none of these political leaders represents us.

These leaders are thankful for the farmers’ contribution to the country, and that’s why they are coming.

It is up to the BJP how they want to be seen, with farmers or against us. We are ready to protest against the ruling government till 2024 (the year when the next parliamentary elections are to be held), and then the new government will scrap these three anti-farmer bills. The laws will be scrapped at all costs.

​Sputnik: Are you indicating a defeat of the Narendra Modi led government in the 2024 elections?

Rakesh Tikait: We backed Narendra Modi during the 2014 and 2019 parliamentary elections and they won. In 2019, they won 18 seats out of 42 in West Bengal, which is roughly 40 percent of the vote share, but they lost miserably in the West Bengal state assembly elections, winning only 77 seats in 292 constituencies.

Who is going to give you a guarantee that BJP will win in 2024?

Sputnik: Will you fight the election against the BJP?

Rakesh Tikait: No, we won’t fight any election. We are just reaching out to people, telling them our problems, and asking voters not to vote for the BJP.

Earlier this year, we visited West Bengal, and Tamil Nadu states in March and April before the state assembly elections. We will do the same in the future, but we will not let the “company” government rule anymore.

Sputnik: What do you mean by company government?

Rakesh Tikait: In this country, political parties fight elections, the real leaders of BJP are now sitting at their homes, and they’re not allowed to speak. Big “company” houses are now running the government.

Sputnik: What is the future course of action? What will be held on the 5 September Mahapanchayat (a congregation of people from several villages), attended by farmer leaders across the country in Uttar Pradesh’s Muzaffarnagar?

Tikait: Let’s hope this government will scrap the three laws before 5 September. If not, then we will decide how to take this protest ahead in Mahapanchayat.

After Bill Gates ‘No’ to Tech Transfer, His Philanthropy Organisation Sings a Different Tune

Israeli Media Reveals When to Expect Ceasefire With Gaza