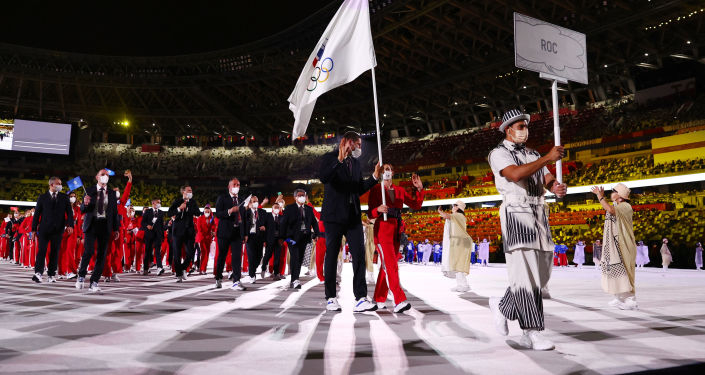 A South Korean TV company has apologised for its broadcast of the opening ceremony of the Tokyo Olympics Games. MBC introduced each nation particpating that entered the stadium with photos that it deemed are associated with countries. And while some nations were presented with banal, but at least not inappropriate photos, such as sushi for Japan, pizza for Italy, and salmon for Norway, other images were downright offensive.

The company showed a picture of the Chernobyl Nuclear Power Plant, the site of one of the worst nuclear disasters in the history of humankind, when Ukraine’s Olympic team entered the stadium.

​Pictures of violent protests and chaos were shown when Haitian athletes appeared on Camera. The Caribbean nation, gripped by instability and poverty, has frequently seen massive protests in the past decade.

​Bitcoin appeared on screen when Olympic team of El Salvador entered the stadium. The country has recently approved bitcoin as legal currency.

In the Olympic Games, South Korean broadcasters used images to “represent” each country during the parade of athletes at the Opening Ceremony.

​Besides photos the TV company added captions. “At war for the past 10 years”, read the statement on screen when Syria’s Olympic team appeared on camera. Marshall Islands was introduced with a caption reading: “[It] was once a nuclear test site for the US.”

South Korean social media users contended that the images were broadcast by accident. Others have harshly criticized the company and apologize on behalf of it.

Im Korean, and really sorry for all.. MBC deserve to be criticized, and must be criticized. All of the Korean are criticizing them. MBC have to apologize officially🤬🤯
Once again, Really sorry..ㅜㅜ

“We apologize for using inadequate photos to introduce countries such as for Ukraine and Haiti in today’s opening broadcast, and inappropriate subtitles that were used. We apologize to Ukraine, and all the countries, and to the viewers”.

Incidentally, this is not the first time that the companies that broadcast the Olympic games have raised eyebrows. Back in 2008, when Beijing hosted Summer Olympic Games, MBC introduced Cayman Islands as famous “tax haven for establishing offshore funds”.