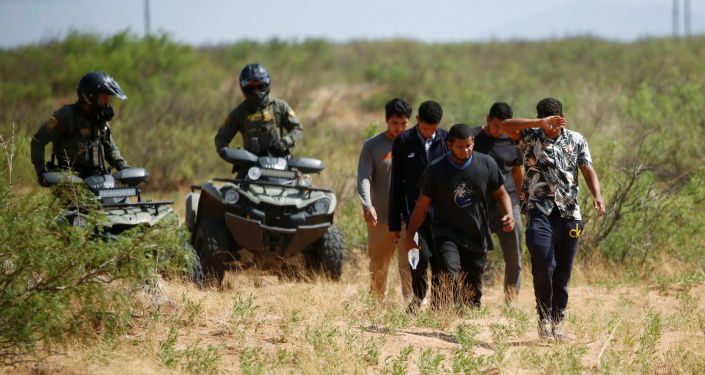 On Thursday, US Vice President Kamala Harris hosted recipients of the Deferred Action for Childhood Arrivals (DACA) programme, telling them that the US is their home.

The meeting took place after a Texas federal court ruled last week that DACA was created illegally under the Obama administration. The term “dreamers” refers to those who were brought to the US illegally by their parents when they were children. Right now, there are about 650,000 such people in the US being protected by DACA.

© REUTERS / JOSE LUIS GONZALEZ
A migrant from Guatemala runs to hide from U.S. Border Patrol after crossing into the United States from Mexico, in Sunland Park, New Mexico, U.S., July 22, 2021

“I want to make clear to the dreamers that are here, and to those who are watching from home, this is your home, and we see you and you are not alone”, Harris said.

She assured the attendees that the Texas court ruling “will not immediately impact current DACA recipients”, but added that the move “will put hundreds of thousands of young immigrants in jeopardy”. According to the vice president, the Biden administration “is taking action”.

Harris also said that she spoke with Senator Dick Durbin on Wednesday about DACA, claiming, “we stand in solidarity on this issue – we will not give up”.

“The president and I are unequivocal that we recognise you for the Americans that you are, and that we recognise that you deserve all the rights that come with American citizenship”, she underscored, referring to the DACA dreamers.

The vice president went on by saying that “many [dreamers] arrived in their home country, the United States, before they could walk or talk”.

“Many have been living recently, these years, a life of uncertainty even though this is the only country they have ever known. They deserve a pathway to citizenship”, Harris concluded.

She spoke after Judge Andrew S. Hanen of the US District Court for the Southern District of Texas ruled last Friday that the US Department of Homeland Security (DHS) “is directed to post a public notice […] that a US District Court has found the DACA programme to be illegal and that, though applicants may continue to submit applications, the government is prohibited from granting such applications”.

Just in: A federal judge in Texas has blocked the DACA program going forward — it won’t affect current recipients for now (judge is putting that issue on hold, pending expected appeals), but it blocks DHS from approving new applications https://t.co/urJh8jnJDd pic.twitter.com/LqvSDWx2ao

According to Hanen, the DHS violated the Administrative Procedure Act (APA) by creating and continuing to operate DACA, because judicial precedent has established that a US government agency has no power to act until given that power by Congress, and Congress has “expressly foreclosed DHS’s adoption of the DACA memorandum”.​

President Joe Biden pledged to appeal what he described as the “deeply disappointing” ruling, calling for congressional action to protect the DACA dreamers.

270,000 Migrants Arrived in US in Past Six Months: Border Patrol

Harris hosting the Thursday gathering comes as Border Patrol data revealed that at least 270,000 migrants, also referred to as “getaways”, have entered the US and then burrowed into communities across the country so far this federal fiscal year.

Mark Dannels, the head of the National Sheriffs’ Association’s Border Security Committee, told reporters that the “getaway” arrivals ride roughshod over the US’ national security.

“These are people that are coming dressed head to toe in camouflage, being smuggled by the cartels. That is a public safety and national security risk to this country”, Dannels argued.

He spoke after US Customs and Border Protection (CBP) revealed late last week that they had encountered almost 190,000 people attempting to cross the US southern border in June, a number that appears to add up to over one million during the fiscal year 2021.

Since taking office, Biden has reversed several Trump-era immigration policies, such as the “Remain in Mexico” policy, which required migrants from Central American countries to wait for asylum hearings outside the US.

POTUS also stopped the construction of the border wall and suspended the so-called “Asylum Cooperative Agreements” with Guatemala, Honduras, and El Salvador.