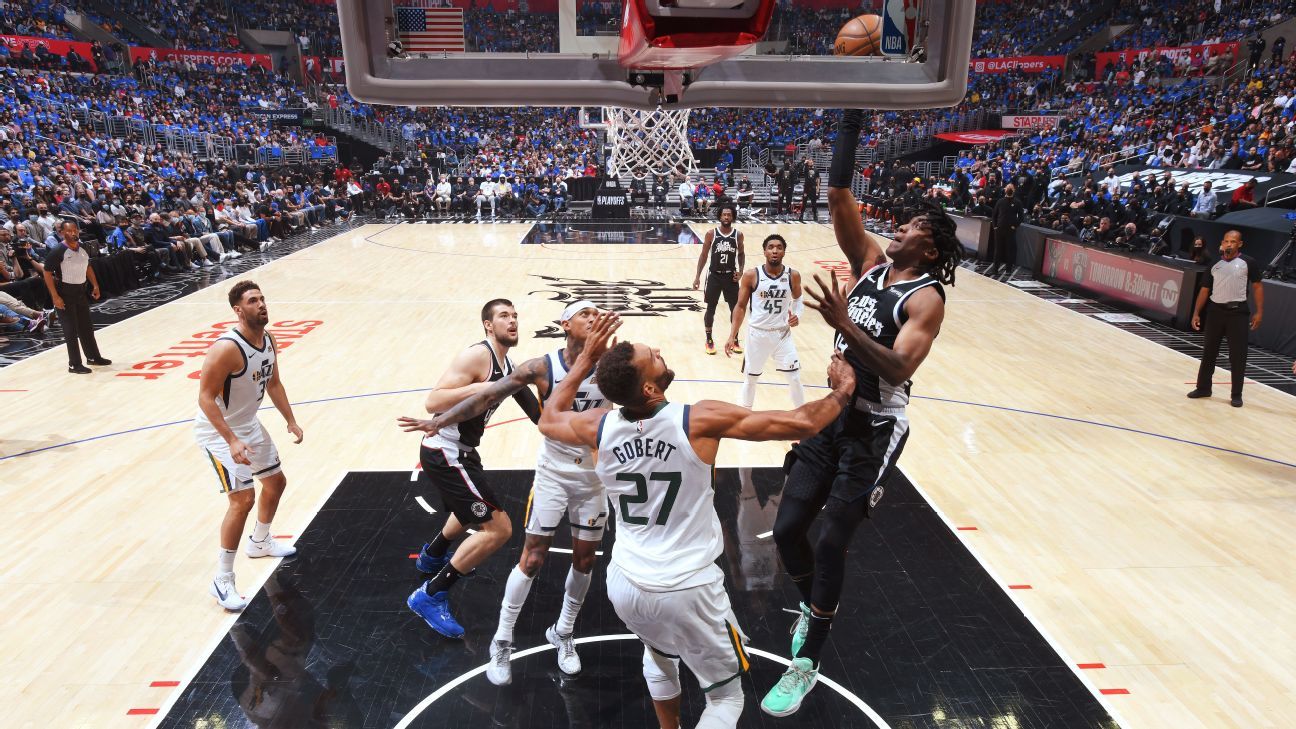 LOS ANGELES — Patrick Beverley, Terance Mann and Marcus Morris Sr. stood on the court and urged the first sellout crowd at Staples Center in over a year to cheer even louder as history was unfolding in dramatic fashion.

For the first time in their 51-year history, the Clippers are going to the Western Conference finals, and they did it the only way this star-crossed franchise could do it — the hard way. Falling behind by 25 in the opening seconds of the third quarter, the Clippers mounted a furious, historic comeback, going on an improbable 75-40 run to eliminate the Utah Jazz with a 131-119 win and advance to face the Phoenix Suns.

The most memorable comeback in Clippers’ history was ignited by Mann. Starting for the second straight game for an injured Kawhi Leonard, Mann delivered the game of his life, scoring 39 points and hitting 7-of-10 3-pointers for the Clippers. Paul George completed a terrific series with a near triple-double of 28 points, nine rebounds and seven assists. And Reggie Jackson continued his stellar postseason with more clutch shots, finishing with 27 points and 10 assists in the biggest game of his career.

Donovan Mitchell would not go out without a fight, scoring 39 points and hitting 9-of-14 triples to go with nine assists and nine rebounds.

But the Clippers would not be denied after experiencing so much heartache in this position before. The Clippers were previously 0-8 all-time with a chance to clinch a conference finals appearance. They had also lost those games by an average of 14.9 points per game.

But the Clippers’ win on Friday not only put an end to what was the longest losing streak with a chance to make a conference finals in NBA history, but it helped close some of the wounds from last year’s playoff collapse.

The Clippers came into this season looking to redeem themselves for blowing a 3-1 lead in the second round to the Denver Nuggets in the bubble.

This postseason, the Clippers made their own history. They trailed 0-2 to Utah but won four straight after that to become the first team in NBA history to overcome multiple 0-2 series deficits in a single postseason. They were down 0-2 in the first round to Dallas before winning that series in seven games.

This comeback in the second round was done without their best player for the final two games. With Leonard out indefinitely due to a sprained right knee, the Clippers defied lowered expectations without their two-time Finals MVP.

And they clinched the series facing Utah at full strength. Mike Conley Jr. played in the series for the first time since injuring his hamstring in the first round. And Mitchell started despite being a game-time decision due to an ankle injury slowing him down as the series progressed.

Facing elimination, Mitchell shook off the injury early and scored 16 points in the first quarter on an array of dazzling drives to the basket to go with three 3-pointers. And then Jordan Clarkson caught fire, scoring 17 straight at one point in the second quarter to help Utah go into the half up 72-50.

Utah pushed the lead up to 75-50 but Mann wouldn’t let the Clippers fold. Mann scored 20 points in just under nine minutes, and the Clippers cut it to 90-88 before heading into the fourth down three.

Utah could not stop the Clippers after that as LA’s confidence kept growing and the sellout crowd kept getting louder and louder at Staples Center.

LA outscored the Jazz 40-25 in the fourth, and the party was well under way when Ty Lue took out his starters with 37.9 seconds remaining. When Mann was the final starter to go to the bench, the forward received the loudest cheers of the night as the Clippers were heading to their first Western Conference Finals.

Warriors’ Curry, Green will not play vs. Phoenix