Bellingham Becomes Youngest to Play at Euro: Who Are Other Teens Who Made History at the Tournament? 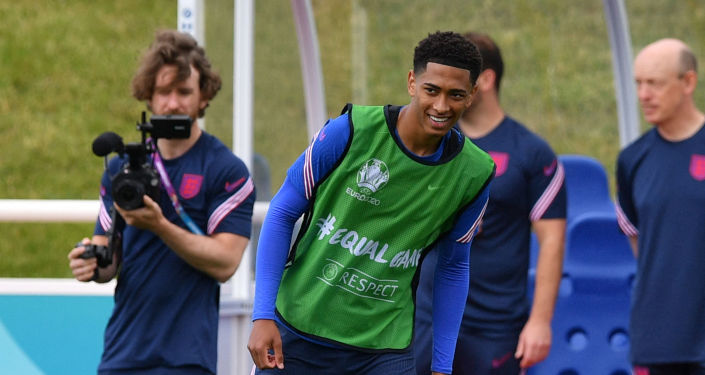 Jude Bellingham made history on Sunday as he became the youngest player ever to feature in a European Championship game.

He set the record, replacing England skipper Harry Kane in his team’s encounter against Croatia after coming off the bench.

Bellingham, aged 17 years and 349 days, overtook Dutch left-back Jetro Willems’ record, who featured in the 2012 tournament at the age of 18 years and 17 days.

​Before Willems, Enzo Scifo of Belgium was the youngest player to play at the European Championship.

With his appearance against Croatia, Bellingham also broke Michael Owen’s long-standing record to become the youngest English player ever to represent the country in a major football competition.

Speaking about Bellingham, former India international Mehtab Hossain, who played for the Indian Super League (ISL) side Kerala Blasters, told Sputnik: “There’s no doubt that Bellingham is an incredible talent. At 17, he is already a complete player and his skills are well above other teenagers that are playing in the Euros”.

As Bellingham seals his place in the history books, here are other record-setting teenagers at the Euros:

Swiss Johan Vonlanthen, at the age of 18 years and 141 days, became the youngest player in the history of the Euros to score a goal when he equalised against France, breaking English midfielder Wayne Rooney’s record by three months.

Interestingly, Rooney had set the record four days previously when he hit a brace to lead England to a comfortable win against Vonlanthen’s side. However, with his goal against France, Vonlanthen went past Rooney and made the record his own.

Vonlanthen retired from international football in 2018 after making 40 appearances for the Swiss national team.

Youngest Player to Feature in a Euro Final – Renato Sanches

Renato Sanches was hot property in the football world even before the start of the Euro 2016 that was held in his home country of Portugal.

He had just moved to Bayern Munich after ending his nearly three-year association with Benfica and he had a reputation of being a supremely talented youngster who could emerge as one of the best midfielders of the game.

He didn’t disappoint the Portuguese fans in the tournament, as he not only became the youngest player ever to feature in the Euro final, but also played a major role in Eder’s goal, which eventually won them the tournament.

Sanches scored one goal during the Euro 2016 and bagged the Young Player of the Tournament award as his country won the competition for the first time in their history.

However, since his promising start, he has failed to deliver on his potential and is currently playing for French club Lille, which he joined in 2019 on a $30.3 million deal.

Other Teenagers to Watch Out for in Euro 2020:

Groomed by current Arsenal manager Mikel Arteta, Saka is an absolute gem. England boss Gareth Southgate described it as “like a slippery eel getting away from those challenges”.

At 19, he looks much older than his actual age due to his leadership skills. The English player of Nigerian descent is incredibly versatile and blessed with extraordinary talent.

He is equally comfortable taking up his position on the left, right, or centre because of his extreme pace, which allows him to outrun his rivals in the midfield.

18-year-old Musiala is already a popular name in European football, thanks to his association with Bundesliga giants Bayern Munich.

Last year, Musiala became the youngest footballer to play a game for the club. He also became Bayern’s youngest goal scorer when he netted in the side’s 8-0 annihilation of Schalke.

He was 17 years and 205 days old when he scored his maiden goal for Bayern, breaking the earlier record of Roque Santa Cruz, who scored his first goal aged 18 years and 12 days.

Even though he is still a teenager, Musiala seem to have the potential to emerge as one of the young superstars of the game.

Former India footballer Abdul Khalique spoke to Sputnik about the kind of impact Musiala could have in the ongoing Euro tournament.

“If you watch him closely, Musiala is already showing a few glimpses of his mentor Thomas Muller in the field”, said Khalique. “Certainly, any player who is being guided by the likes of Muller, Robert Lewandowski, and Joshua Kimmich is bound to emerge stronger after the tournament”.

‘Where Are You?’: GOP Senator Graham Blasts AOC for Not Visiting Southern Border Amid Migrant Influx