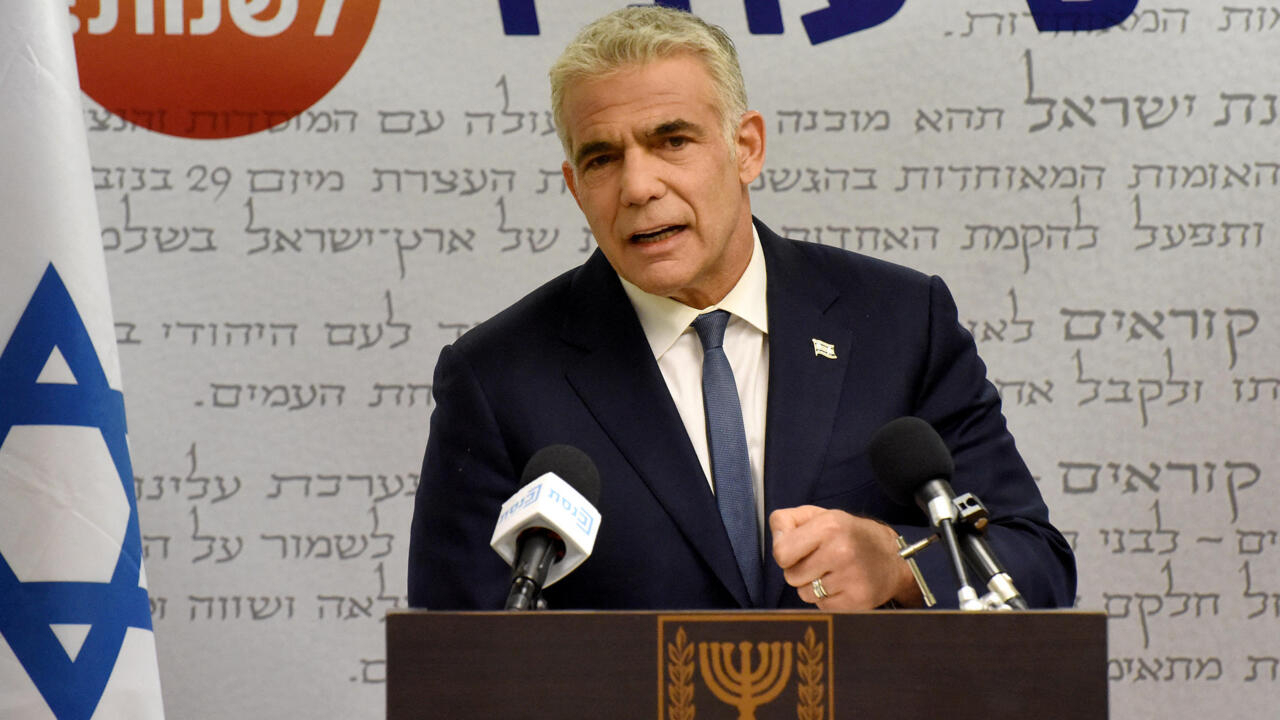 Yair Lapid, like his late father, is a journalist-turned-politician renowned for his staunchly secular positions. But as the centrist politician edges towards the Israeli premiership post, he’s stepped out of his father’s shadow.

Back in the day when he was disseminating the news instead of making it, Yair Lapid had a standard final question on his weekly chat show on Israel’s Channel 2.

“What symbolises Israel for you?” the handsome TV host would ask his guest.

The answers were often long-winded, ranging from lighthearted to heartfelt. But when the leading journalist had his own father, former Israeli justice minister Joseph “Tommy” Lapid, on the show, the answer was illuminating. When the son asked the father what, in his view, represented Israel, the senior Lapid simply replied: “You”.

The dreams of the father could well be coming true years after his death from cancer.

Under a rotating post agreement, the two men would split the premiership – with Bennett serving the first two years and Lapid the following two.

The rotating premiership agreement was similar to a deal Lapid struck with centrist Israeli politician Benny Gantz ahead of the September 2019 legislative elections. But that plan was never put to the test since Gantz switched sides to join Netanyahu’s government in yet another display of the dizzying machinations that have forced Israel to hold four inconclusive elections in two years.

The latest election, on March 23, saw Lapid’s party, Yesh Atid (There Is a Future), come second with 17 seats in Israel’s 120-member parliament, the Knesset. Following Netanyahu’s failure to form a government, Lapid was assigned the task by the country’s figurehead president.

In a country where the prime minister faces serious corruption charges but has refused to step down during the trial, and where politicians flip sides with little regard for ideological consistency, Lapid has stood firm on centrist ground.

The journalist-turned-politician has resolutely – and surprisingly quietly – stuck with his core positions: preserving Israel’s liberal secular democracy and protecting the judiciary from Netanyahu’s bids to curb the power of the Supreme Court.

To achieve this, the 57-year-old politician has offered his ally the first shot at the prime minister’s post, pushing back premiership dreams in the interests of compromise and coalition building. He’s also done it twice in as many years, earning the respect of many Israelis, according to recent opinion polls.

“It’s been very good for Lapid politically. He was seen as something of a lightweight, but he has displayed political depth – and human depth,” explained FRANCE 24’s Jerusalem correspondent, Irris Makler. “Israelis are impressed by his ability to look at the main objective and not to put ego first, which is very rare for politicians and especially rare for politicians who used to be journalists.”

It’s been a long journey for the broodingly handsome former anchorman – dubbed the Israeli George Clooney – since he threw his hat in the political ring nearly a decade ago. Ridiculed, in his early political days, for his prolific Facebook posts, dismissed by the likes of Netanyahu as an upstart without a university degree, Lapid has emerged as a self-made man fulfilling his father’s dreams on his own terms.

‘Where Is the Money?’

Born on November 5, 1963, Lapid grew up in the Tel Aviv neighbourhood of Yad Eliyahu in an apartment bloc called “the Journalists’ Residence” since it housed many prominent journalists.

Lapid’s parents were both part of Israel’s secular intelligentsia. His father, Tommy, was a larger than life character, a Holocaust survivor and one of Israel’s most prominent journalists renowned for his acerbic wit, sharp tongue and fiercely secular positions. One of modern Israel’s leading figures, Tommy Lapid entered politics in the late 1990s, going on to become justice minister before returning to the media as a TV commentator and newspaper columnist until his death in 2008.

His mother, Shulamit Lapid, is a well-known novelist and playwright.

A self-proclaimed autodidact, Lapid quit high school and began a very successful career in journalism at a newspaper, where he had a weekly column, before joining Chanel 2 as an anchor. He also wrote and published several books, plays and even had a brief stab at acting.

In 2012, galvanised by social justice protests that rocked Israel during the so-called Arab Spring, Lapid quit journalism for politics. The party he founded, Yesh Atid, was embraced by the mostly young protest movement. It was a natural fit since Lapid’s platform focused on equitable distribution of resources as well as sharing national responsibilities, notably calling for an end to military exemptions for Israel’s ultra-Orthodox community.

The platform spoke for the secular middle class, an economically vital yet politically overlooked demographic in Israeli society. Corruption among the country’s political elites was also a major issue, with his supporters adopting a Lapid column title, “Where Is the Money?” as a campaign catchphrase.

With his film star good looks and his youthful volunteers sporting T-shirts emblazoned with the party logo, Lapid was dismissed as a pretty boy upstart in the macho world of Israeli politics, where distinguished military careers, in some parts, are still considered the mark of true leaders.

But with his first legislative elections, in January 2013, Lapid surprised his detractors when Yesh Atid came second after Netanyahu’s Likud, winning a remarkable 19 seats in the Knesset.

As the chief powerbroker in Israel’s invariable post-electoral coalition-building process, Lapid opted to join Likud in a governing coalition.

Given his focus on income distribution and corruption on the campaign trail, Lapid was made Israel’s finance minister. It was a position that increased his international profile, making him a darling of the US listing set: In 2013, Lapid was on Time magazine’s 100 most influential people ranking as well as on Foreign Policy’s Global Influencers list.

As finance minister, Lapid met with leading international figures, including Emmanuel Macron, then a young finance minister himself before his successful 2017 French presidential bid. Years later, the French president was quick to endorse Lapid before the March 23 elections. “Modern and progressive” was how Macron, another centrist politician, described his Israeli “friend”.

But back home, the responsibilities of government were starting to chip away at the star power.

Lapid’s efforts to balance the national budget included an austerity plan that was unpopular – particularly among the ultra-Orthodox community, which benefits from large state subsidies and whose institutions depend almost wholly on state largesse to survive.

The young finance minister’s enthusiastic embrace of social media was also the butt of jokes among the younger, wired set. His prolific Facebook posts – which favoured vague platitudes and said nothing specific – sparked a satirical website, called the Lapidometer.

Users could select, or type in, a key word on the Lapidometer, which would generate text that read like the finance minister’s Facebook posts. “We noticed that the Yesh Atid party spends a lot of time on Facebook instead of engaging in parliamentary activities,” one of the Lapidometer creators told Israeli media. “In addition, their posts don’t say anything. They’re full of beautiful text and very little substance. A bit like Yair Lapid.”

To his credit, Lapid proved a good sport, telling Israeli media he had tried the Lapidometer with his children, and they agreed the generated text did indeed sound a lot like him.

Fired from the job

However, his tenure as finance minister did not last long. By the end of 2014, Netanyahu had fired Lapid – as well as his other centrist minister, Tzipi Livni, who held the justice portfolio – from their posts.

In a televised news conference announcing the firings, Netanyahu thundered, “I will no longer tolerate opposition from within the government,” setting Israel on the path of yet another round of early elections.

The prime minister’s hardline position on settlements and a controversial nationality bill emphasising Israel’s Jewish character above its democratic principles had sparked divisions within the coalition.

For Lapid, increased spending on settlements were hard to accept while he was forced to implement austerity measures. For Netanyahu, the compromises required to hold his coalition had lost its appeal. The ruling Likud party leader wanted a more manageable government made up of right-wing and ultra-Orthodox parties, considered his natural partners.

Holding an ‘anything but Netanyahu’ coalition together

Coalitions have been an unavoidable feature of Israel’s multi-party political system and it remains Lapid’s biggest challenge in a country that has experienced a rightward slide along with the collapse of the once formidable Labour party.

On Sunday, May 30, when “kingmaker” Bennett announced he would join his “friend” Lapid in a newly formed coalition for change, there was rejoicing at Bennet’s Yamina (Rightwards) party headquarters.

After more than 12 years of Netanyahu in power, numerous corruption scandals and four inconclusive elections in just two years, many Israeli politicians would like to see the back of the divisive prime minister.

An “anything but Netanyahu” position may have drawn the hardline nationalist Bennett into Lapid’s political embrace, but Makler warns that the coalition for change faces immense challenges ahead. “It has parties from the whole spectrum of Israeli politics, from an Arab party at one end, left-wing parties, centrist parties, and right-wing parties who are defectors, or refugees, from Netyahu’s Likud coalition. Once they remove him, there’s not much binding them together,” explained Makler.

On the campaign trail, Lapid kept his comments on critical foreign policy issues – such as the Israeli-Palestinian conflict and the Iran nuclear deal – to a minimum. Officially, Lapid supports a two-state solution, but he also opposes the division of Jerusalem, which Palestinians view as their future capital.

As with most Israeli politicians in the era of the collapsed Israeli-Palestinian peace process, Lapid’s focus remains domestic.

In his May 30 primetime speech announcing his decision to join forces with Lapid, Bennett repeatedly called for “unity”, noting, “This government won’t be against any community, any group. It won’t be hostile to anyone.”

The statement was widely viewed as referring to the ultra-Orthodox community, which comprises between 10 to 12% of the Israeli population. Lapid, for his part, has also not dwelled on the ultra-Orthodox issue. Unlike his father, who took on the community with the fearless pugnaciousness of a leftist Holocaust survivor, Lapid has recently been more conciliatory in his public discourse.

In that respect, the son who followed his father from journalism to politics has moved away from the positions of his progenitor.

“Tommy Lapid was an amazing man and much more of an intellectual than his son. But his son has lived his own life and has carved his own career,” said Makler. “He’s now perhaps out of his father’s shadow.”

US officials tour Europe to shore up allied support on Russia, China and Iran