The second edition of the NBA’s play-in tournament starts Tuesday and the final participants have narrowed. The teams that finish between seventh and 10th in the standings from each conference will qualify for the tourney to determine who will earn the No. 7 and No. 8 seeds in the playoffs.

Last season, the league kicked off the bubble portion of the season with seeding games to help finalize the postseason participants. This season will be the first time the play-in tournament will use the full season’s standings, as superstars LeBron James and Stephen Curry will play on one side and likely Rookie of the Year LaMelo Ball will make his first playoff appearance on the other.

But what would it take for each team to escape the play-in tourney with a place in the first round? We asked our NBA insiders to weigh in, giving the best-case scenario for each team — and the worst.

The case for: The Celtics have every reason to expect to make the playoffs. Boston is the most talented of these teams at the bottom of the East playoff picture — even with Jaylen Brown out for the season. The Celtics also will host both games at TD Garden — if a second game is even needed — which gives them another leg up on their rivals in trying to survive the league’s inaugural play-in tournament.

The case against: Boston, despite its talent, has never inspired confidence in its ability to play at a consistently high level. And it would surprise no one for the Celtics to fall flat twice in a row and go home early. After all, there is a reason they are in the play-in tournament to begin with. — Tim Bontemps

The case for: In a one- or two-game scenario, no team can employ more potential chaos than the Hornets. Charlotte can roll out one of the streakiest scorers in the league in Terry Rozier, an unpredictable talent in likely Rookie of the Year LaMelo Ball and could regain the services of Gordon Hayward (foot) by next week. Add in the core of Miles Bridges, Devonte’ Graham and P.J. Washington, and the Hornets have both the talent and guile to take advantage of the opportunity.

The case against: This group will offer a case study in how much experience matters on the play-in stage. Aside from Rozier and Hayward, the rest of the group is unaware of how much the intensity changes. One thing to monitor will be Ball’s offensive production. The Hornets are just 3-4 since Ball’s return from a wrist injury on May 1. In three wins, he’s averaging 20.3 points. In five losses, he’s averaging 13.0 points. — Nick Friedell

The case for: If the Pacers can get their core guys together for the play-in tourney — Malcolm Brogdon, Caris LeVert, Domantas Sabonis and Myles Turner — they have enough talent to beat any team to get into the postseason. If Indiana can land the eighth seed, it would put the math in their favor with two chances to get into the playoffs.

The case against: Given how the past few weeks have played out in Indiana, making a case for the Pacers to make it into the playoffs is difficult. Indiana’s top four players have played just 10 games together (5-5 record) all season, and the team will likely be without Turner for the remainder of the season. The Pacers have struggled to play at a high level all season, and if they can’t find that gear in the play-in tourney, they’ll be headed home. — Tim Bontemps

The case for: Between Bradley Beal‘s pursuit of the scoring title and Russell Westbrook‘s conquering of the triple-double record, the Wizards have been one of the hottest teams in the league over the past month and a half. If Beal can shake a recent hamstring tweak, the Wizards can absolutely win the eighth seed. After being shut down for most of January due to a COVID-19 outbreak, the Wizards have exhibited a steely edge. Doing it for two more games should be no issue for this crew.

The case against: Beal scored 50 points in a win over Indiana on May 8, but missed the next two games due to a lingering hamstring injury. If Beal isn’t healthy, the Wizards’ frenetic run to the play-in could come to a quick end. Westbrook will play to the very end, but head coach Scott Brooks has struggled to patch up the shortcomings on the defensive end. Without Beal, outscoring two teams to earn a spot could be too tall a task. — Ohm Youngmisuk

The case for: Over the past few months, the Mavs have played at an elite level. Dallas stumbled early in the season, when a COVID-19 outbreak in the rotation was among the factors of the Mavs’ 9-14 start. Since then, Dallas has gone 32-15, tied for the fourth-best record in the league during that span. Plus, Luka Doncic has played exceptionally during the postseason, posting averages of 31 points and 10 rebounds on 50% shooting during the Mavs’ six-game series defeat to the LA Clippers.

The case against: If the Mavs end up in the play-in tournament, that means they will have ended the regular season in a mini-funk, having lost three of four games. Can they count on Kristaps Porzingis? He scored 19 points in 22 minutes against what’s left of the New Orleans Pelicans in Wednesday’s win after missing two weeks due to soreness in his surgically repaired right knee. Another concern with Porzingis? Good teams target him defensively. — Tim MacMahon

The case for: With the Blazers, there are two key components, and they’re connected: health and Damian Lillard. The Blazers battled through injury issues through much of the season, which put them in this position. They got by because of Lillard, who has scored 30-plus points in his past seven games, leading Portland to an 8-2 record in its past 10 games. If there’s any player to count on to push his team forward, it’s Dame.

The case against: When Lillard’s not quite right, neither are the Blazers. And they simply can’t win unless Dame plays at his ridiculously high level. And opposing teams are game-planning more than ever to try to take the ball out of his hands. Can Portland get enough out of CJ McCollum, Norman Powell and Carmelo Anthony in a tight game? — Royce Young

The case for: The Lakers are riding a three-game winning streak for the first time since mid-March. If the defending champs can extend that streak to five by closing out the regular season with two more wins in Indiana and New Orleans, they can still avoid the play-in tournament completely depending on how Dallas or Portland finishes out. Even if they find themselves in the play-in round, the fact that they went 7-2 combined this season against Golden State, Memphis and San Antonio should give Los Angeles solace that it can go at least 1-1 against that group to assure a playoff berth.

The case against: The doomsday scenario for the Lakers goes something like this. LeBron James comes back this weekend after having played only two games in the past two months and looks out of rhythm. Dennis Schroder comes back and is still dealing with lingering symptoms. Anthony Davis overcompensates for the tightness in his groin by reaggravating his right leg injuries that kept him out nine weeks. The Lakers then fall to the play-in tournament, where they fall prey to Stephen Curry’s brilliance, followed by either Memphis’ young legs or Gregg Popovich’s smart schemes, and their repeat title bid is over before it can even begin. Far-fetched? Maybe. Completely implausible? Certainly not. — Dave McMenamin 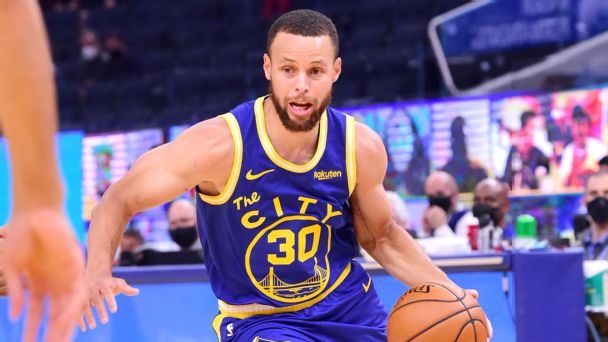 The case for: The Warriors have Stephen Curry, so they have a chance against any team they face. With Curry and Draymond Green leading the way, there’s no situation that will faze a Warriors group that would love to create havoc at the top of the West. Aside from Curry’s usual brilliance, Green is playing his best basketball of the season, which comes at a great time for a depleted Warriors squad.

The case against: Aside from a possible injury to Curry, there are two potential stumbling blocks for Steve Kerr’s group. First, the Warriors lack depth. The status of Kelly Oubre (wrist), Damion Lee (COVID protocols) and Eric Paschall (hip flexor) remains unclear, and the Warriors have been playing an eight-man rotation heading into the play-in. And this roster doesn’t have much playoff experience besides Curry, Green and Kevon Looney. Can Andrew Wiggins (who got a small taste of the postseason in Minnesota) and the rest of the roster respond on a bigger playoff stage? — Nick Friedell

The case for: Ja Morant thrives when the lights are bright. The Grizzlies got knocked out by the Trail Blazers in last season’s play-in tournament, but Morant made it a thriller, capping off his Rookie of the Year campaign by scoring a season-high 35 points and adding eight assists — despite playing with a broken thumb on his shooting hand. The previous year, Morant had a triple-double to lead 12th-seed Murray State to a first-round March Madness win. Add in that the rest of the roster is finally healthy at the end of the season, and the Grizz should be able to give any team their best shot.

The case against: The Grizzlies, who have put a foundation in place to be competitive for years, simply don’t have as much experience or top-end talent as the teams they’re competing against. The Memphis roster has played in a combined 97 playoff games, none in a Grizzlies uniform. By comparison, LeBron James has 260 games of playoff experience. Stephen Curry has 112. Damian Lillard has ended multiple playoff series with walk-off shots. The Mavs are the most comparable potential opponent, but Luka Doncic has the experience of winning titles with Real Madrid and the Slovenian national team. — Tim MacMahon

The case for: It looked as if making a case for the Spurs to win their way out of the play-in was going to be tough. They had lost six of seven and were in danger of falling out of the tournament altogether. But then they took on the Milwaukee Bucks and hung 146 points in a win. If San Antonio wants to climb into the first round, it’ll have to depend on DeMar DeRozan doing what he’s done best this season — being a steady scorer and a very good playmaker.

The case against: The Spurs have dealt with a slew of injuries this season and won’t have Derrick White for the tournament, which would make getting through two of the Lakers (or Blazers), Warriors or Grizzlies an exceedingly tall task. Of course, these are the Spurs. So we can never count them out until the clock hits zeros. — Andrew Lopez