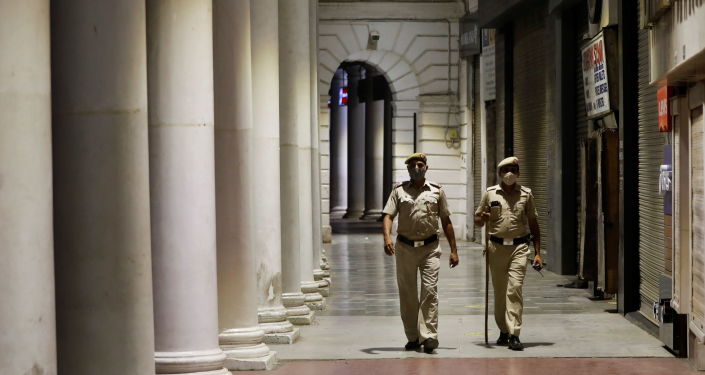 Deepanshu Kabra, an Indian Police Services (IPS) officer, on Tuesday shared a heart-warming short video clip on Twitter where two cops can be seen interacting with a couple on the side of a road. The man and the woman riding a bike were actually newlyweds going back home after their small ceremony when they were stopped by the cops who were also asking others the details of their whereabouts.

On finding out that they had stopped a newlywed couple on their way home, the cops behaved like elderly Indians and blessed the husband and wife with flower garlands and some money – which is considered auspicious as a wedding gift.

People applauded the police officials for being so kind, considerate, and a little bit romantic with the garland gifting.

​In another incident, a police official in Bihar was caught on camera helping a blind person cross a street. Keeping in mind the social distancing factor, the video showed the cop holding one end of a stick and the visually impaired person holding the other while slowly crossing a road. The police officer also fed the man and bought him water, the ANI news agency reported.

#WATCH | A Bihar Police personnel, Shiv Kumar Chaudhary helps a visually impaired man cross a road in Patna. The Police personnel says, “He was sitting here for a long time. I thought of feeding him with the food available with me & helped him cross the road. I got him water too” pic.twitter.com/opAF3JFZNL

Police officials have also been helping out in cremating the bodies of deceased COVID patients with dignity. For instance, Rakesh Kumar from the Delhi Police recently postponed his daughter’s marriage to help people cremate or bury COVID bodies that had not been claimed by anyone.

While these are incidences of generosity and good-heartedness involving Indian police officials, some footage has detailed what people have called the “angry” and “impatient” side of the khaki-wearers.

Recently, a group of police officers in Karnataka state used batons to hit and disperse people from what looked like a regular vegetable market.

The video shows vegetable sellers lined up on both sides of a narrow park street in a residential area – with buyers flocking to the market.

The police officers were captured on camera scaring the crowd away while instructing vendors to not gather themselves or more crowds in the area as COVID is spreading so rapidly in the nation.

Several people who came across the video re-shared it with captions urging the police to be more sensitive when dealing with people.

​In several comments, the IPS was also tagged, asking senior police authorities to train their juniors to be less violent and more cooperative.

Previously, Mumbai Police officials came under public heat for punishing people on the streets of Mumbai for not wearing masks.

“Face mask rule violators at Marine Drive in Mumbai being made to do a “Murga” walk as punishment by Mumbai Police” Received on my ‘SignalWonderbox.’ A common punishment in the boarding school I attended. Comical, but physically taxing.I certainly won’t forget my mask!! pic.twitter.com/GnVY6NfasV

​The love-hate relationship between Indians and law enforcement has been deepening with each passing day, but most people understand that everything the police officers are doing right now is to protect people while putting their own lives at stake.

Are we making a joke in this grave situation,police force is doing so much efforts by putting their own life at a stake and people are making joke of it ,police force has lot of things to handle kindly don’t waste their time and energy like this 🙏🙏