COVID in Himalayas: China to Put ‘Separating Line’ on Mt Everest to Keep Climbers From Nepal Away 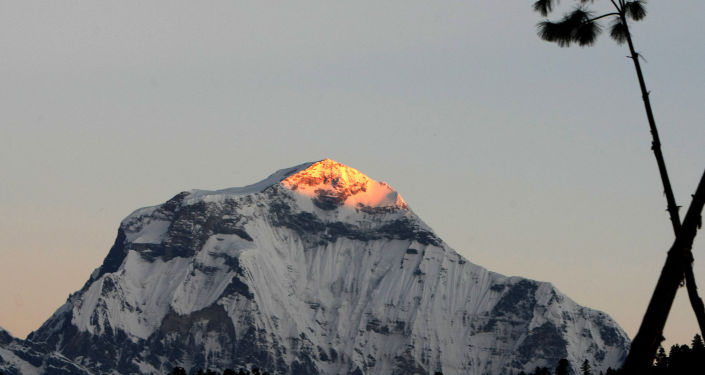 In a bid to keep the route to world’s highest peak, Mount Everest, COVID-free, China will be setting up a “separation line” on the summit to ensure that climbers from Nepal who make it to the top, do not step on the Chinese side of the mountain, to avoid the risk of spreading COVID, NDTV reported on Monday citing Chinese news sources.

Mount Everest stands atop the China-Nepal border, with the north slope belonging to China and the south slope under Nepal’s jurisdiction.

China has maintained an entry ban on foreign climbers aiming to conquer Everest since last year. This year, 21 Chinese climbers have been permitted to attempt the difficult climb – after having quarantined themselves in Tibet since April.

To keep these Chinese climbers away from those venturing up Everest from Nepal, mountain guides will be setting up dividing lines on the summit.

The Chinese side will also step up virus control measures at the Chinese base camp on the northern side of the mountain.

The second wave of COVID has been particularly harsh for India and its neighbouring South Asian nations. Nepal, for instance, that has a population of merely 30 million people – similar to that of the Indian capital Delhi – has started witnessing over 2,000 fresh cases per day.

Despite recording consistent COVID cases, Nepal has opened its doors to these exotic mountain expeditions to balance its virus-hit economy. The Tourism Ministry of Nepal has issued permits for 377 climbers seeking to complete the prestigious Everest climb.

Earlier in April, a Norwegian climber was the first to test positive after being airlifted from an Everest base camp to a hospital in Kathmandu, the capital of Nepal. The climber had begun to complain of what seemed like a high-altitude pulmonary edema – which occurs in people at high altitudes typically above 2,500 metres (8,200 ft).

Last week, at least 19 people were evacuated out of the base camp of the world’s seventh highest peak Dhaulagiri after some people began showing symptoms of the virus. Upon testing, seven of the evacuated climbers emerged positive with coronavirus.

A Challenger Has Disappeared: Britain May Scrap Third of Its Tank Force to Upgrade the Rest

US Stocks Rally Strongly Into March With Nasdaq Up 3%