At Least 12 Killed in Post-Election Clashes in West Bengal 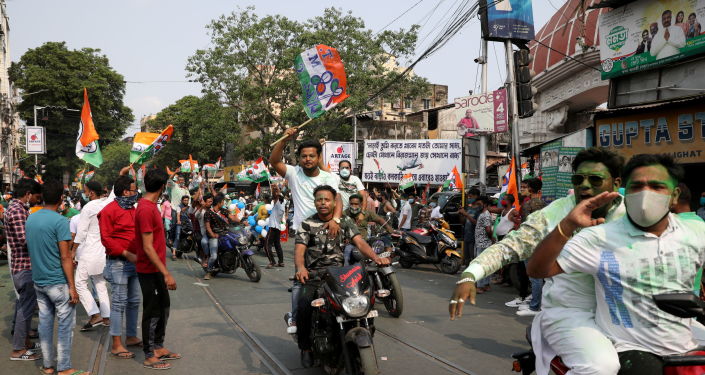 At least a dozen people have died and several others were injured in clashes that erupted across West Bengal after the elections.

Supporters of the Trinamool Congress (TMC), which is the ruling party in West Bengal, and Bharatiya Janata Party (BJP) were reportedly brawling in the streets, attacking each other and vandalising shops and homes.

The TMC has claimed that three of its supporters were killed by the BJP. However, the BJP, which is the country’s ruling party and also known as the saffron party, rejected these allegations and accused TMC “goons” of killing nine of its workers.

The BJP’s chief in the region, Ashish Kshetrapal, said that TMC activists descended on the state’s Purba Bardhaman area shouting “Joy Bangla” (Happy Bengal) and “Khela Hobe” (Let the games commence) slogans at around 11am on Monday.

“We built a counter-resistance, and the TMC attackers fled. But they returned via another route, forcibly entered my house and attacked my family members. My mother died in the attack”, Kshetrapal told reporters.

​According to Kshetrapal, TMC supporters also injured his father and uncle, and vandalised and looted about 18 houses in the area.

The Federal Home Ministry has demanded a report into the violence.

The BJP said it would hold a nationwide strike against the violence on 5 May, the same day Banerjee is expected to take an oath as the state chief for the third time. BJP party president Jagat Prakash Nadda will visit the state on Tuesday to meet party workers.

‘I’m Leaving Because the Club no Longer Has the Faith in Me’, Zidane Blames Real Madrid After Exit