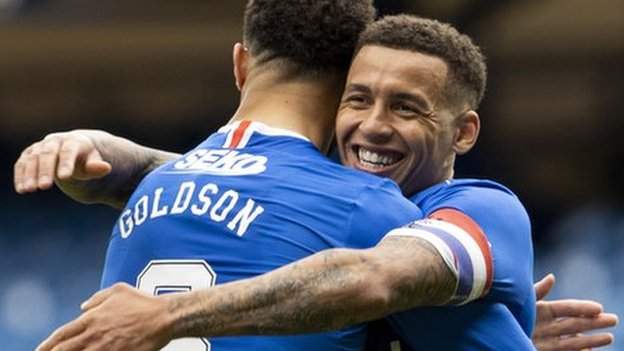 A Kemar Roofe double and goals from Alfredo Morelos and Jermain Defoe sealed the rout, with Callum McGregor sent off for Celtic after 26 minutes.

The win ensured an unbeaten campaign against their city neighbours for the first time since 1999-20.

“The game plan worked to a T,” said Gerrard.

“I watch a lot of Celtic and they’re a good team but with all due respect they’ve got weaknesses – especially in that backline – so I wanted to put two men right up against those centre halves and cause them problems.

“I wanted Ryan Kent to continue to do what he does to Scott Brown, which is to be a right menace. The three of them [Roofe, Morelos and Kent] were superb and they’re the reason why we’ve won comfortably.”

Celtic midfielder McGregor was dismissed after a foul on Glen Kamara in the build-up to Roofe’s opener earned him a second yellow card.

Odsonne Edouard levelled before Morelos smashed the champions back ahead, Roofe added his second and Jermain Defoe slid in a late fourth.

The win put Rangers 23 points ahead of Celtic and four short of 100 points with the title secured long ago.

And the Ibrox side are now just two games away from an unbeaten league campaign, with a trip to Livingston followed by a final home game of the season against Aberdeen.

“This time last week I felt really flat,” Gerrard told Rangers TV, reflecting on their Scottish Cup penalty shoot-out defeat by St Johnstone. “We were on the back of a performance that really stung.

“We had a few moments and a few issues over the 90 minutes, but you’re always going to get that when you pick a bold attacking team.