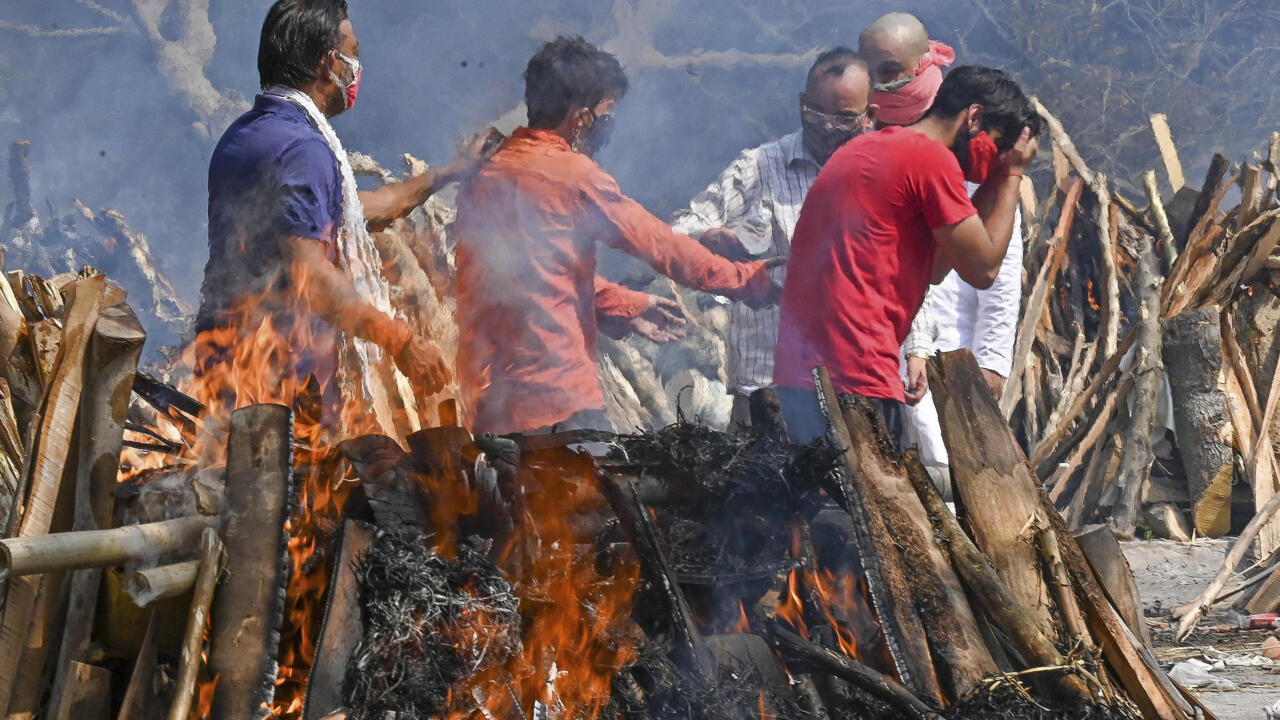 Indian social media users have taken to Twitter with desperate pleas for help as the country struggles to cope with record high Covid-19 cases and deaths. But Indian Prime Minister Narendra Modi’s government has been accused of attempting to control the narrative with legal orders to delete Twitter posts critical of its response.

On April 21, when Mirza Saaib Beg received an email from Twitter informing him “in the interest of transparency” that the social media company had received a demand from the Indian government to take down his post on the Covid-19 crisis, the Oxford University student was not unduly concerned.

A lawyer hailing from India’s disputed Kashmir region, Beg is currently enrolled in a postgraduate public policy programme at Oxford, and is familiar with legal intricacies.

“I didn’t respond because they were just informing me, they didn’t say they were taking down the tweet,” he said. “At that point, I found it perplexing that in the thick of such a massive crisis, the Indian government had assigned manpower to look at my tweet.”

India’s devastating second wave has seen the country of 1.3 billion people reach grim milestones with the country recording over 350,000 new infections on Tuesday, and the death toll reaching nearly 200,000.

The collapse of the country’s health system has sparked scenes of unimaginable devastation in the nation’s capital, New Delhi, overwhelming medical facilities and supplies. Foreign aid to help India cope with the crisis began arriving on Tuesday, with crates of ventilators and oxygen concentrators from Britain unloaded at the city’s airport.

France is sending oxygen generators able to provide 250 patients with a year’s supply of the gas, according to the French embassy in India.

Amid criticisms of Indian Prime Minister Narendra Modi’s handling of the crisis, the official attention paid to Beg’s Twitter account, with just over 5,500 followers, was startling.

But in the next few days, Beg received a series of Twitter emails followed by a notification over the weekend that the social media company had complied with New Delhi’s requests to make his post invisible inside India. The Indian government’s demand to Twitter accused Beg of violating the country’s Information Technology Act, 2000 although no charges were filed.

The situation had become more serious. “I don’t know what they’re trying to prove,” said Beg in a phone interview with FRANCE 24. I’m a masters student, I don’t have a massive Twitter following. My Twitter feed is not a cause of concern for the government. At a time when manpower is needed to handle a colossal crisis, the fact that someone took the time for this reveals a shocking level of callousness.”

Beg was one of dozens of people – including opposition politicians, filmmakers, activists and authors – targeted for their Twitter, Facebook and Instagram posts as India’s Covid-19 crisis spirals into a political battle.

The government’s attempt to control the narrative on social media is particularly troubling in a country where Modi’s Bharatiya Janata Party (BJP) has “increased pressure on the media to toe the Hindu nationalist government’s line”, resulting in India’s slide to 142 out of 180 countries in the 2021 World Press Freedom index compiled by Reporters Without Borders.

Campaign rallies, festivals during a surge

The Modi government maintains the accounts were not restricted due to criticism of its handling of the pandemic but for spreading fake news. Only those users “circulating fake news, old photos, etc., and trying to mislead and create panic” were blocked, a government source told India’s NDTV.

However, India’s second surge is not unfolding in a remote corner of the country, but in the heart of the national capital of 20 million people, under the gaze of national and international media. The visceral images of families wailing as loved ones breathe their last outside overstretched hospitals, bodies lined up at crematoriums working around the clock to cope with the death tolls and parking lots turned into makeshift crematoriums reveal the extent of the crisis.

Responding to the queries on its action, Twitter told Indian digital news media portal, MediaNama, that upon receiving a legal request, the platform reviews content under rules set by it and the local laws. “If the content violates Twitter’s Rules, the content will be removed from the service,” Twitter said. “If it is determined to be illegal in a particular jurisdiction, but not in violation of the Twitter Rules, we may withhold access to the content in India only.”

The withdrawn posts were marked by sharp criticisms of the government’s failures to prepare for and avert a second wave. While much of Europe and the US was under lockdown, mass gatherings continued in India with campaign rallies for state elections drawing thousands and a massive Hindu pilgrimage at the Ganges that was allowed to proceed while the second surge raged.

The tweets included a post by opposition politician Moloy Ghatak comparing Modi’s rallies to Nero fiddling while Rome burned – a metaphor expressing an opinion that requires no fact-checking.

However, experts have cast doubt on India’s official Covid-19 figures, with many noting that the death toll of nearly 200,000, with an average of more than 2,000 people dying every day, was an underestimation.

At a cremation grounds in Modi’s home state of Gujarat for instance, a worker told the New York Times he had been recording the cause of death as a vague “sickness” as instructed by his bosses, who did not respond to requests for comment. Epidemiologists warn of a “complete massacre of data” in India, with modeling showing the true death tolls are “two to five times what is being reported”.

The government’s latest bid to control the narrative on social media amid a pandemic has alarmed many Indian experts.

“It’s extremely important because the government is attempting to minimise the extent of the crisis while suppressing the figures,” said Sushant Singh, senior fellow at the New Delhi-based Centre for Policy Research, in an interview with FRANCE 24.

“It’s also important because the legacy mainstream media is not performing its role of speaking truth to power. The kind of coverage in international media is not being done by the Indian media. There are no headlines on what was Modi or [Indian Interior Minister] Amit Shah doing while so many were dying. The narrative is simply that the system has failed, the system being an amorphous entity that no one can blame,” Singh explained.

#CovidSOS as social media steps in

Over the past few weeks, social media has functioned as a free speech and medical service helpline for millions of Indians enraged by the tragedy and struggling to save loved ones.

People in need post pleas for information or resources that are circulated, and contact information for vendors who have oxygen cylinders or drugs and medical facilities accepting patients are shared using hashtags such as #CovidSOS.

Outrage has also spilled onto social media with Indians circulating reports by the international media on the unfolding tragedy.

But at times the foreign media is not above getting a rap from New Delhi. The Indian High Commission [or embassy] in Australia on Monday wrote – and tweeted – a letter urging The Australian, to publish its rejoinder to a British Sunday Times article reproduced in the Australian daily.

The article, “Modi leads India out of lockdown and into a Covid apocalypse” begins with Modi at an April 17 election rally in West Bank telling cheering supporters, “I’ve never seen such huge crowds,” while India hit a record 230,000 new coronavirus infections in 24 hours.

In its letter, the Indian High Commission in Australia claimed the Sunday Times article “strangely rushed to blame the surge on the restricted election campaign by Hon’ble Prime Minister of India and one religious gathering”. It offered instead a version of the government’s handling of the crisis that appeared deeply disconnected from the situation on the ground.

The “one religious gathering” referred to the Hindu Kumbh Mela, often dubbed “one of the largest pilgrimages on Earth”.

‘Superspreader’ on the Ganges

The festival occurs in roughly 12-year cycles and was supposed to be held in 2022. It was brought forward to 2021 due to “astrological configurations”, drawing warnings of a “superspreader” event and raising questions in some circles over the failure to postpone this year’s festival.

This year, the BJP-led state government in Uttarkhand, where the 2021 Kumbh Mela was held, shortened the festival to 30 days and imposed “Covid-19 protocols”, according to national media outlets, which were difficult to enforce.

The difference between Hindu and Muslim religious events

With sick believers and non-believers gasping for breath outside medical facilities, the BJP has been put on the defensive. Some critics have accused the Hindu right-wing party of hypocrisy and Islamophobia.

In March last year, just weeks before India went into a nationwide lockdown, a religious event organised by a Muslim missionary group in New Delhi, worshippers were denounced as “human bombs” on TV stations. The hashtags #CoronaJihad and #CoronaTerrorism trended on Twitter as government spokesmen lambasted the Muslim religious gathering.

In his Twitter posts from Oxford, Beg was comparing the Modi administration’s responses to the Muslim Tablighi Jamaat and Hindu Kumbh Mela events.

“I was drawing parallels to last year’s first wave of the pandemic, which was blamed on Muslims. In some cases, Muslims were denied treatment in hospitals,” said Beg, referring to a slew of discrimination reports and at least one police complaint filed last year.

The tweet that put Beg in the Indian government’s crosshairs featured a photograph of a hospital daily report form with a comment that a Covid-19 patient and a relative had requested a discharge “because they do not want treatment from a ‘Muslim’ doctor”.

If India’s pandemic had a photo, this would be it.

A 76 year old wants to be discharged because she doesn’t want treatment from a Muslim doctor.

The covid pandemic will eventually be over but India’s real pandemic has no vaccine in sight.

Photo from a friend who is a doctor. pic.twitter.com/DC7uoUozB5

Beg said he received the photograph from a doctor friend based in the southern Indian city of Bangalore. “After I received the email from Twitter, I messaged my friend to ask if he’s sure it’s authentic. He replied it is,” explained Beg. “I would be inclined to believe it’s authentic. But I’m not in Bangalore, all I can do is ask my source. The same information has been publicly shared by many other people. If that particular information is not authentic, they can check and challenge that. But there are several reports of Muslims being denied treatment, being accused of ‘Corona Jihad’ and it’s consistent with the rising Islamophobia so I would be inclined to believe its authenticity.”

A Google reverse image search of the tweeted image showed no prior usage of the photograph. The hospital form features Dr. Mehta’s Hospitals letterhead. Dr Mehta’s Hospitals did not reply to FRANCE 24’s request for a response.

India has a mammoth fake news problem fuelled by digital illiteracy. The country’s religious fault lines have been a major contributor to the spread of fake news online, with fact-checking organisations often overwhelmed by the volume of unverified content in circulation.

The country’s Muslim minority has faced much of the brunt of attacks, with unverified WhatsApp messages circulating on Muslims slaughtering cows, a sacred animal for Hindus, and rumours of Muslim men “seducing” Hindu women.

Amid this avalanche of fake news, the government’s focus on a handful of prominent Indians criticising the Modi administration’s failures, has once again sparked accusations of selective targeting.

But Beg maintains he will not be intimidated or silenced. “When such colossal mismanagement is taking place, why should people not be allowed to criticise the government,” he noted. “Suppression of information and criticism of the government is not only dangerous for India but it is putting people around the world at risk.”