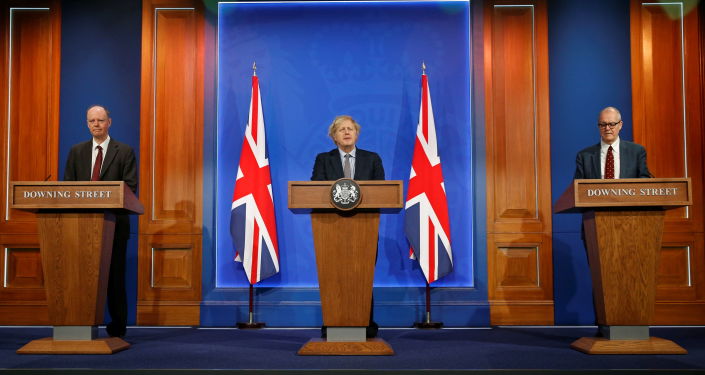 White House-style televised press briefings that were touted by Boris Johnson last year as providing the nation with “more direct, detailed information from the Government about what is going on” have been scrapped before getting off the ground, reported The Times.

Complete with new oak lecterns, Tory blue screens, microphones and an array of Union Jacks, the £2.6 million upgraded former colonial courthouse at No 9 Downing Street will instead be used by the Prime Minister, politicians and various officials to host press conferences.

Johnson reportedly axed the long-nurtured plans amid concerns about the “political risk” involved, as the briefings might provide “oxygen” to “difficult” stories for ministers, according to the outlet.

Allegra Stratton, the PM’s press secretary, who had quit as national editor at ITV News late last year to become Rishi Sunak’s director of communications, had been tapped to lead the afternoon TV press conferences as part of Johnson’s push to embrace more direct communication with voters.

Stratton’s name was linked to a purported power tussle, as Lee Cain, the prime minister’s former director of communications, had raised objections to her appointment.

A row had flared up after Stratton and Carrie Symonds, the prime minister’s fiancée, raised concerns regarding Boris Johnson’s apparent plans to appoint Cain as his chief of staff. Subsequently, Cain resigned, followed by the exit of the prime minister’s former senior adviser, Dominic Cummings.

The Cambridge University graduate will now move on to become a spokesperson for the 2021 United Nations Climate Change Conference (COP26).

The project to carry out a hi-tech upgrade at No 9 Downing Street in a nod to the White House press briefings venue was originally said to have been conceived by Boris Johnson’s former adviser Lee Cain.

Johnson told LBC last year that the White House-style televised press briefings would offer the public an opportunity to receive “more direct, detailed information from the Government about what is going on”.

“We do think that people want direct engagement and want stuff from us, and so we’re going to have a go at that,” said the PM.

However, from the outset, the ambitious plan was beset with setbacks that ran up expenses.

When ITV News exclusively revealed photographs of the plush White House-style briefing room in March 2021, it unleashed a torrent of criticism, particularly after the cost of the refurbishing was revealed in a Freedom of Information request.

Complete with a podium placed at the head of the room, seating for journalists, official lecterns, four Union Jack flags and a Henry vacuum cleaner, the Labour Party had slammed the previously branded the hi-tech refurbishment a “vanity project”.

Oh and £50 on a second-hand Henry hoover. pic.twitter.com/DTpgg4lBZc

​The renovations also stirred up controversy after it became known that they had been carried out by Russian firm Megahertz.

“A Russian-owned firm has been installing all of the communications equipment in Number 10. Questions need to be asked, the company does big installations for a number of organisations – but this is government,” a source was cited by ITV News as saying.

​Downing Street dismissed all speculations, saying that there were “absolutely not” any security concerns,and there was no suggestion that Megahertz or Okno-TV, its parent company, were under the influence of the Russian government, reported HuffPost.

Since the upgrade was completed earlier this year, Boris Johnson has used the room on a number of occasions to update the nation on the coronavirus developments.