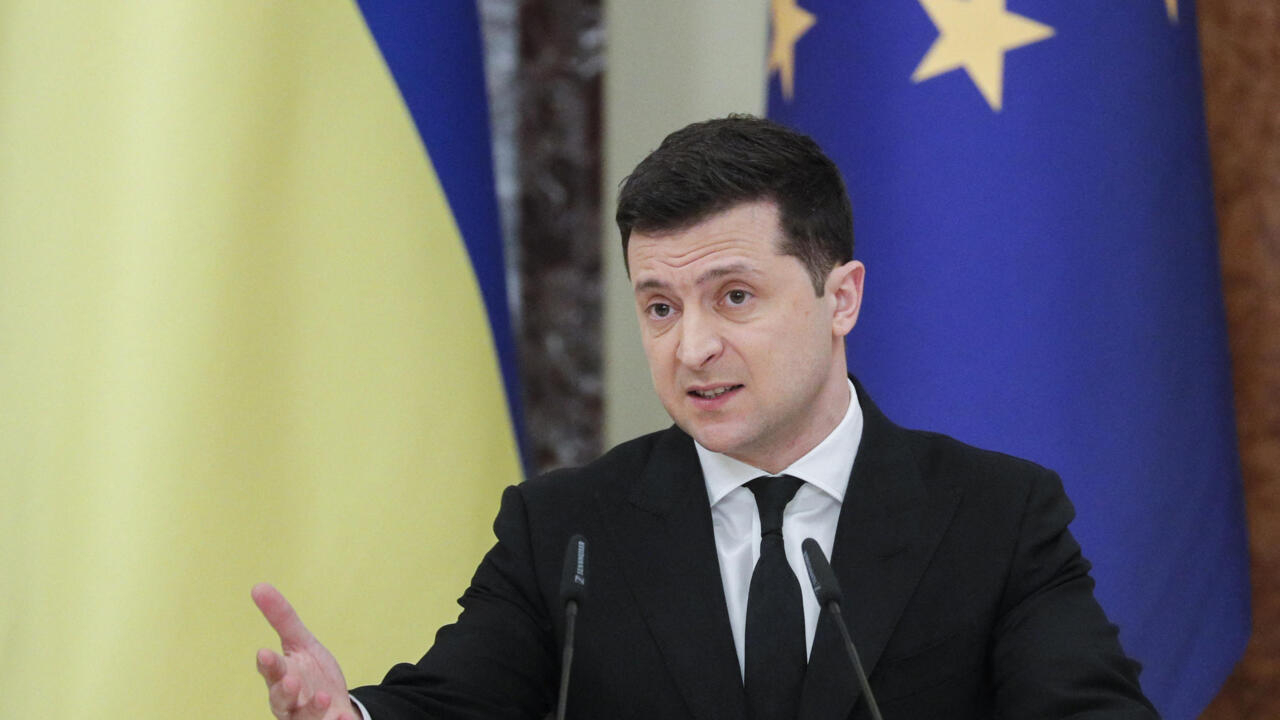 French President Emmanuel Macron and German Chancellor Angela Merkel hold talks on Friday with Ukrainian President Volodymyr Zelensky in a show of support for the former Soviet state, which fears a Russian invasion.

The talks come as a massive build-up of Russian troops along the border with Ukraine has sparked new tensions in eastern Ukraine, where government forces have been battling pro-Russian separatists since 2014.

Macron will receive Zelensky for lunch in Paris and both men will then talk with Chancellor Angela Merkel by video link, the French presidency said Thursday.

“Ukraine’s sovereignty is under threat,” Macron’s office said, adding: “All our work is aimed at avoiding an escalation and defusing tensions.”

Zelensky’s meeting with the leaders of France and Germany, who have been mediators in the conflict since 2015, comes as Ukraine accuses Russia of threatening to destroy it.

The talks aim to lay the groundwork for a meeting in the so-called “Normandy” format, which involves the leaders of France, Germany, Ukraine and Russia and have not taken place since December 2019.

Ukraine and Russia have traded blame over a spike in violence in the conflict in eastern Ukraine, where Ukrainian troops have battled Russian-backed forces in a conflict that Kiev says has killed 14,000 people since 2014.

Ukraine and its Western allies have accused Russia of a “provocative” build-up of troops near the country’s eastern border and annexed Crimea.

Friday’s talks come amid rising US-Russia tensions, with the Biden administration on Thursday announcing the expulsion of 10 Russian diplomats and imposing sanctions against dozens of people and companies, holding the Kremlin accountable for interference in last year’s presidential election and the hacking of federal agencies.

On Thursday, Ukrainian Foreign Minister Dmytro Kuleba told a press conference with counterparts from the fellow former Soviet countries of Estonia, Latvia and Lithuania that Russia was “openly threatening Ukraine with war and the destruction of Ukrainian statehood”, adding, “the red line of Ukraine is the state border. If Russia crosses the red line, then it will have to suffer.”

In recent weeks Moscow has amassed tens of thousands of troops along Ukraine’s northern and eastern borders, as well as on the Crimean peninsula which Moscow annexed in 2014.

Russia’s defence ministry says the troops are merely responding to “threatening” actions by the NATO alliance and participating in military drills.

Ukraine, where a pro-Kremlin president was ousted in a popular uprising in 2014, has made clear its ambition to join NATO.

Thursday’s visit to Kiev by senior diplomats from the Baltic states is the latest show of support from European countries and the US, which has warned of “consequences” if Russia acts “aggressively” towards Ukraine.

On Wednesday, Biden and Merkel called on Russia to reduce its border deployment.

Biden had a day earlier proposed a summit with Putin – an offer that Russia is still considering.

Some observers have cast the escalation as an attempt by both Moscow and Kiev to test the new US president to see how far Biden is willing to go to defend Washington’s ally and confront Russia.

Biden raised hackles in Russia last month by agreeing with a description of Putin as a “killer”.

The Russian troop buildup comes amid an uptick in fighting since the start of the year in eastern Ukraine over which Moscow and Kiev have traded blame.

At least 28 Ukrainian soldiers have been killed in the breakaway regions of Donetsk and Lugansk since the beginning of January, compared to 50 in all of 2020.

The separatists have said that more than 20 of their fighters have been killed already in 2021.

Moscow accuses Kiev of planning an offensive against the separatists and warned that it could intervene in the event of an attack on their strongholds, where many residents have been issued with Russian passports.

The latest fighting has shattered a ceasefire brokered last July that had brought relative calm to the region after years of clashes that have claimed some 13,000 lives.