It’s All About Trust: How Sputnik V COVID Jab is Bringing Russia and Latin America Closer Together 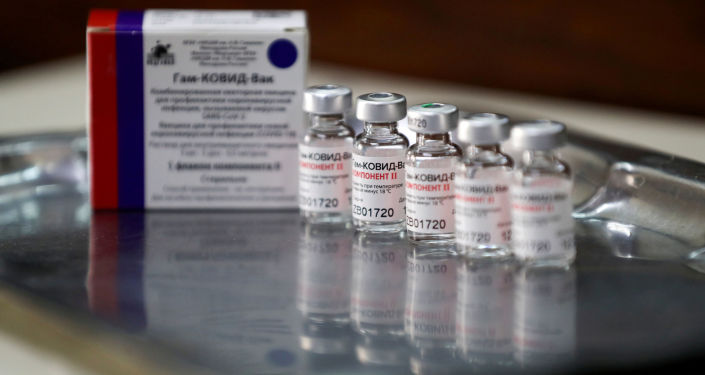 To date, Sputnik V has been registered in 60 countries globally with a combined population of 3 billion people, including 13 Latin American and Caribbean nations.

YouGov’s March survey, conducted in nine countries, indicated that Russia is seen as the most trusted vaccine producer alongside the US with Sputnik V – the world’s first registered jab – being the most recognisable brand: 74 percent of respondents have heard of the Russian vaccine; Pfizer/BioNTech ranked second (69 percent), and AstraZeneca ranked third (60 percent).

A similar trend is observed in Latin America, says Juan Martin Gonzalez Cabañas, an Argentine geopolitical analyst at Vision & Global Trends and political consultant, who has researched public opinion surveys in Argentina, Brazil, Mexico, Peru, and Chile. According to him, the level of trust towards the Russian jab among Latin America’s nations is high.

“The main aspect that led to these levels of trust, was the beginning of the vaccination campaign, and that after a couple of months already in the field, this vaccine has shown no major adverse effects,” Gonzalez Cabañas notes. “In the case of Argentina (and this logic can be applied to the entire region) the paper published in The Lancet was a turning point, a true ‘watershed’, the spread of this publication generated a greater perception of trust.”

The authorisation of Sputnik V by Russia in August 2020 was immediately met by a wave of smearing reports from the Western press. However, the February 2021 publication in The Lancet, the weekly peer-reviewed general medical journal, recognising the Russian jab as safe and effective upended the tide of hostile media reviews.

​There can be no doubt that the US and European mainstream media’s smear campaign affected the public perception of the vaccine, including in Latin America, believes the Argentine analyst. He suggests that the levels of trust towards Sputnik V could have been even higher had the Western press treated the Russian Gamaleya Centre’s scientists and their vaccine fairly.

Nevertheless, Sputnik V’s efficacy and nearly zero adverse effects are speaking for themselves and serving as the best advertisement for the Russian vax, Gonzalez Cabañas emphasises.

On 13 April, the Argentine Ministry of Health report said that 94 percent of Sputnik V first-dose recipients produced specific antibodies, while those receiving two doses had developed specific antibodies in 100 percent of cases. To date, 2,632,249 out of 44.94 million Argentinians have received the first dose of Sputnik V, according to the country’s Telam news agency.

​Earlier, on 6 April, Brazilian President Jair Bolsonaro held a phone conversation with Vladimir Putin discussing, in particular, the registration of Sputnik V in Brazil, and organising supplies and production of the jab in the South American country. It turned out in mid-March 2021 that the US Department of Health had pressured the Brazilian government not to accept Russia’s Sputnik V vaccine, despite Brazil’s soaring COVID-related death toll.

“Now distant from Washington, we may be closer than ever to Moscow,” Marcio Coimbra, the former director of Brazil’s trade and investment promotion agency, tweeted about the Bolsonaro-Putin phone call.

The Associated Press admits that the US “has largely missed an opportunity to engage with Latin American governments during the pandemic,” citing Tom Shannon, a former under-secretary of state. In contrast, Russia is capitalising on the chance to bolster its cooperation with the region, which has already “caused consternation in US diplomatic circles,” according to the media outlet.

“Although the region is complex and there are many factors involved, if we guide ourselves by a simple logic, Russian collaboration with Latin America during the pandemic should be reflected in a more positive public perception on Russia in the region,” believes Gonzalez Cabañas, stressing that this applies both to Latin American countries which have longstanding ties with Moscow, and those who have yet to build ties with Russia.