Protester in LA Suffers Ruptured Testicle After Being Shot by Cop, Files Lawsuit 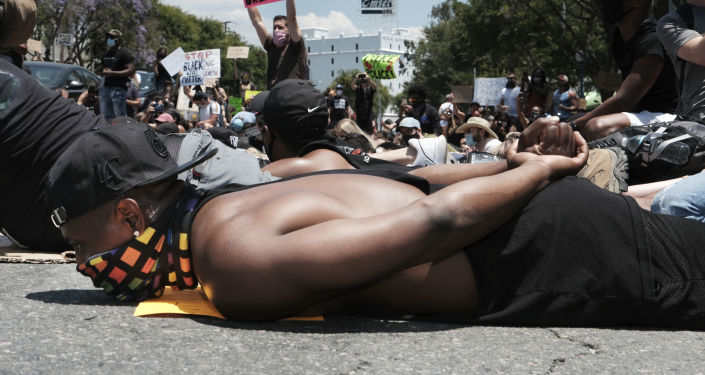 A participant of a protest against police brutality last summer in Los Angeles has filed a federal lawsuit over the testicular damage he allegedly sustained back then at the hands of an LAPD officer.

According to the Los Angeles Times, the protester, a 29-year old man named Ben Montemayor, had his testicle explode “into pieces” after getting shot with a hard-foam projectile by a Los Angeles police officer.

Montemayor was allegedly brandishing a large sign calling for the defunding of the LAPD, when police officers in riot gear started advancing.

As he was “walking in the direction he believed police wanted demonstrators to go”, as the newspaper puts it, Montemayor was approached by two officers who “rushed forward, ripped the sign from his hands and shoved him backward”.

“As Mr. Montemayor stood there, unarmed, not resisting arrest, posing no threat whatsoever to anyone around him, and having just been violently shoved, a third officer less than ten feet away aimed his green [40-millimeter] launcher at Mr. Montemayor and intentionally shot him in the groin with a high-speed plastic, hard foam projectile,” the lawsuit says.

Footage from a police body camera reportedly shows Montemayor being shoved by an officer who then shoots the protester “in the groin at relatively close range”.

Both of Montemayor’s testicles swelled and he had to undergo a surgery which involved “piecing back together portions of his testicle which had exploded,” according to the lawsuit.

With LAPD Chief Michel Moore and the city being named as the defendants, the lawsuit seeks to challenge Use of Force Review Board’s finding which states that the officer in question was “in policy” when he shot Montemayor.

“A civilised society cannot survive if the police are allowed to run wild in the streets,” Dan Stormer, one of Montemayor’s attorneys, said. “The LAPD is out of control.”