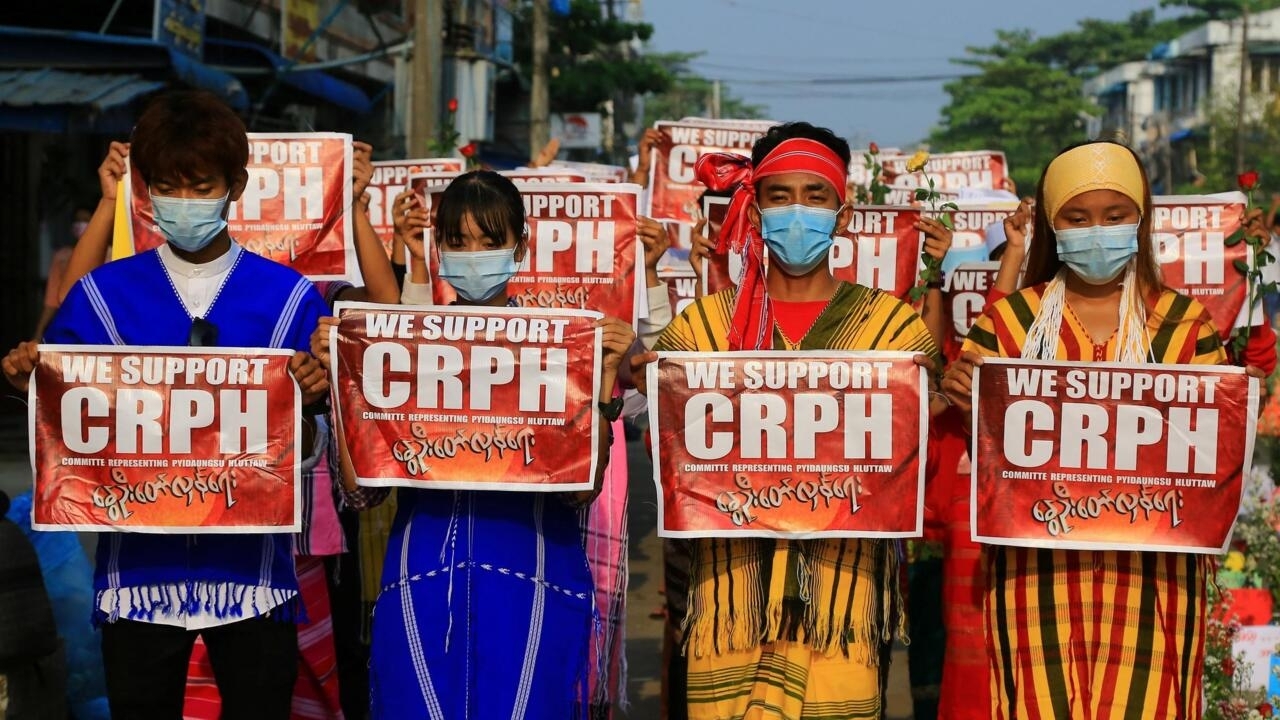 If Myanmar’s February 1 military coup has accomplished one thing, it has been to bridge some of the differences that have long kept the country’s ethnic minorities apart. Now protesting side by side against the junta, Myanmar’s ethnic groups hope to build a more equitable and federal Myanmar, and are picking up arms together.

On March 8 this year, the Catholic nun Sister Ann Rose Nu Twang became a worldwide sensation after she was photographed kneeling down in front of Myanmar’s security forces in the northern city of Myitkyina, begging them to take aim at her rather than the hundreds of unarmed Kachin minority demonstrators that had taken to the streets to protest the coup that day. But despite her pleas, March 8 ended like most other days since February 1: in more bloodshed, and more civilian deaths.

The nun’s brave and selfless act quickly became a symbol for Myanmar’s growing resistance movement, and underscored a phenomenon that had not been seen in the troubled country in several decades — a united people against the junta. “Everyone has taken part in these demonstrations, regardless of age, profession, religion or ethnicity,” Alexandra de Mersan, an anthtoplogist specialising on Myanmar, told FRANCE 24 in an interview.

Prior to the coup, the Bamar ethnic majority – which represents 80 percent of the population and lives on the central plain – had largely ignored the country’s other 134 ethnic groups’ fight for federal rights ever since Myanmar’s independence in 1948.

“Until now, the fate of these minorities never really interested the Bamars,” Ethnologist Bénédicte Brac de la Perrière explained. “Some even feel that these ethnic armies are an obstacle to national unity.”

But the coup, and the violent crackdown on protesters that ensued — leaving at least 710 people dead, according to the Assistance Association for Political Prisoners (AAPP) — turned out to be a game-changer. The Bamars, the Kachins, the Chins, the Shans and the Karens suddenly put their differences aside to instead focus on a common foe: the army, also known as the Tatmadaw.

‘All Burmese have the same enemy: the army’

Thirty-seven-year-old Thi Zinh* is of Bamar and Kachin descent. She now lives in Finland but grew up in Kuktai, in Myanmar’s northern Shan State, which is often the scene to armed conflicts between ethnic groups and the military. When she was five years old, her family moved to central Myanmar, near Mandalay. “Belonging to two ethnic groups, I was always mocked at school. The Bamars wouldn’t let me be in their group, and the Kachins wouldn’t let me be in theirs,” she recounted. “The fear, the lack of trust and the divisions that exist between ethnic groups are very real, and stem from a very early age.”

After the army’s crackdown on anti-coup protesters also affected the Bamar majority, however, many Bamars have now chosen to show solidarity with the country’s ethnic minorities, with some even publicly apologising for not speaking out against the army’s oppression against these groups earlier. “We regret it… How could we not know what [some] ethnic groups were going through for all these years? Today, we realise that all Burmese have the same enemy: the military,” a young Burmese said, asking to remain anonymous.

“It’s not as if the Bamars hate other ethnic minorities. They just didn’t know what was happening in some of the regions,” she said. “Today, everyone is living with the Tatmadaw’s brutality. The Bamars are realising what other ethnic groups were experiencing on a daily basis all these years.”

From threats to allies

This shift became even more significant at the end of March, when a number of ethnic rebel groups announced they were joining the demonstrators’ fight against the junta, calling for the country’s youth to join them. In all, 10 of the country’s main rebel groups have now announced they will “re-examine” a ceasefire deal they entered with the army in 2015. Previously, the army effectively sowed divisions between them.

The move by the rebel groups has sparked hopes of the emergence of a “federal army”, which would consist of rebels, civilians and potentially also army defectors, in a bid to defeat the Tatmadaw.

More and more youths are now leaving their families to pick up arms.

Juliette Verlin, a French national living in Yangon, recounted on Twitter how a friend of hers, a taxi-driver, left the city to join the Karen army. “He was struggling with too much anger and frustration after seeing, reading and hearing about friends and family who had been victims to this sadistic violence by the army on the other side of the country,” she explained.

Myint Pyay*, a Yangon-based researcher, said several of his relatives had done the same in recent weeks. “All of them said that they felt more in danger by staying in the city than by leaving and getting trained by armed groups,” he told FRANCE 24. “Some of them are still hesitating, because they don’t want to leave their families, but they feel like they no longer have a choice: Either they take up arms or they give up the fight.”

In contrast to the pacifist protests that were staged in the first few weeks after the coup, “we’re seeing a radicalisation of the demonstrators in general”, Brac de la Perrière said. “In the cities, we’re now witnessing scenes of urban guerilla warfare. The only ones left [on the streets] are vindictive activists armed with make-shift weapons. And on the other side, security forces are responding with live fire.”

It is not clear how many people have joined the armed groups in recent weeks, but in an recent interview with the English-language newspaper Frontier, a young Kachin Independence Army recruit (KIA) by the name of Zau Tu, said dozens of Kachins and non-Kachins had joined the group in recent weeks. According to him, most new recruits are in their 20s, and between 20 percent and 30 percent of them are women.

“In most cases, these young people join training camps where they will be trained by ethnic groups,” Brac de la Perrière explained. “We know that they are often recruited in towns or villages and leave when they are called up. Their training lasts an average of three weeks during which time they learn how to handle arms, in particular.”

But Brac de la Perrière says the creation of a Burmese “federal army” – for which the shadow government formed by former members of the army-ousted civilian leader Aung San Suu Kyi’s party the National League for Democracy (LND) has called for – is more a “utopian” dream, than a reality. “And even if it was created, it would be much weaker – in terms of both numbers and resources – than the Tatmadaw.”

Myanmar’s rebel ethnic groups are currently estimated to consist of 80,000 fighters, compared with the army’s 400,000.

“And not all groups oppose the army to the same extent,” she added. “The Karens and the Kachins play a major role, of course, but some, like the Was, are less fervent [in their opposition].”

Although Myanmar’s resistance movement might have begun with the overthrow of Aung San Suu Kyi, most ethnic minorities are also calling for a new constitution which would finally hand them the rights they have been demanding for the past 70 years.

“In 2016, when Aung San Suu Kyi came to power, her government said that national reconciliation was its greatest priority,” de Mersan said. “In 2016, for example, she organised the big Panglong peace conference to which both ethnic minorities and the army were invited to the negotiating table. It didn’t lead to anything tangible, but at least there was a conference.”

“The ethnic groups were frustrated with Aung San Suu Kyi’s government and criticised it for staying silent on army abuses in some regions. On several occasions, they also deplored the fact that they couldn’t elect their members to regional parliaments.”

One of the main obstacles for a federal Myanmar to be established is the 2008 constitution that was drafted by the military, and which stipulates that at least a quarter of the parliaments’ seats are reserved for the junta. It also centralises all power to the capital, Naypyidaw.

“Aung San Suu Kyi always wanted to reform this constitution, but she was always blocked by the army. She recently started to raise her voice against it [and] there’s no doubt this worked as an accelerator for the coup,” she said.

On March 31, the government in exile, the CRPH, announced that it considered the constitution to have been dissolved through the February 1 coup and that it would draft a new charter, guaranteeing the creation of a federal state and handing more power to minorities. “The symbolism of this is very strong. Now, the real question is what type of federal state can actually be set up.”

“What is certain is that if the government in exile really wants to have the support of the population as a whole, and thus potentially win this war against the junta, it must negotiate more with each minority than it has until now.”

*The name has been changed to protect the person’s identity

This article was adapted from the original in French

Riots flare again in Northern Ireland despite calls for calm

Last ships stranded in Suez Canal to pass through on Saturday

Swiss prosecutor to appeal against acquittal of PSG president Al-Khelaifi

Wife of ‘El Chapo’ arrested in US on drug trafficking charges