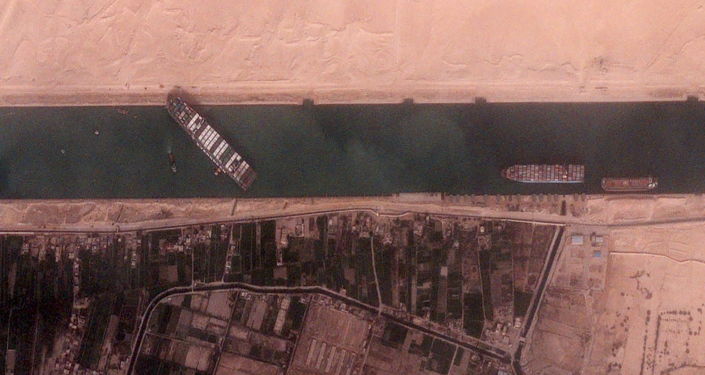 Egypt is leaning toward the theory that the Ever Given incident was caused by human error, Osama Rabie, chairman and managing director of the Suez Canal, has told Japan’s Kyodo news agency.

“There is a possibility that the captain made a mistake in operation or speed regulation,” Rabie said, adding that an analysis of the available data reinforces this view.

The official added that a Suez Canal pilot was on board the ship, but stressed the blame for the accident lays solely on the captain. “The pilot gives advice, but the final decision is taken by the captain. There were no mistakes on our part and we do not bear any responsibility,” Rabie suggested.

Late last month, The Japan Times reported that the Ever Given, which is owned by the Japanese shipbuilding giant Imabari Shipbuilding, was traveling through the canal at a rate of 13.5 knots before running aground, despite the canal’s speed limit of between 7.6 and 8.6 knots.

In the incident’s aftermath, recordings captured by various marine tracking apps appeared to confirm that the Ever Given was traveling at an unusual speed before veering into the canal’s right bank on 23 March.

Rabie’s comments follow remarks he made earlier that Canal authorities would be seeking “over a billion dollars in compensation” for the accident.

The Ever Given’s black box was removed from the ship on 1 April for analysis. The device contains recordings of all radio chatter, captain’s orders and signals that the ship followed before it ran aground. Egyptian authorities had warned the ship and its owners that if they refused to cooperate with the investigation, the case would be requalified as an administrative offense, and the ship and all its cargo would be detained until a court ruling, with that process threatening to drag out as much as two years, while cooperation would allow for the issue to be resolved within a week.

It took canal authorities six days to unjam the Ever Given, with workers and tugs working feverishly day and night to get the ship unstuck amid estimates that every hour it remained jammed up was causing the hold-up of up to $400 million in goods. Egypt itself reportedly lost $14 million in transit fees every day that the drama continued. After the ship was freed on 29 March, it took another five days for all 422 vessels with a combined tonnage of 22 million tones to pass through the canal zone on route to their destinations.

On Friday, Rabie told CNN Arabic that canal authorities were considering expanding the strategic waterway’s width, but that there was not need to deepen the channel.

It’s not clear at this point whom Egyptian authorities expect to pay compensation, with the Ever Given a prime example of the globalized state of modern shipping operations. The massive ship is owned by Imabari, but is registered in Panama, managed by German ship management company Bernhard Schulte, chartered by Taiwanese container transport company Evergreen Maritime, and has an all-Indian crew. The name of the ship’s captain has not been revealed.

Is It a Fair Cop? Why Campaigners and Activists are So Angry About Priti Patel’s New Policing Bill