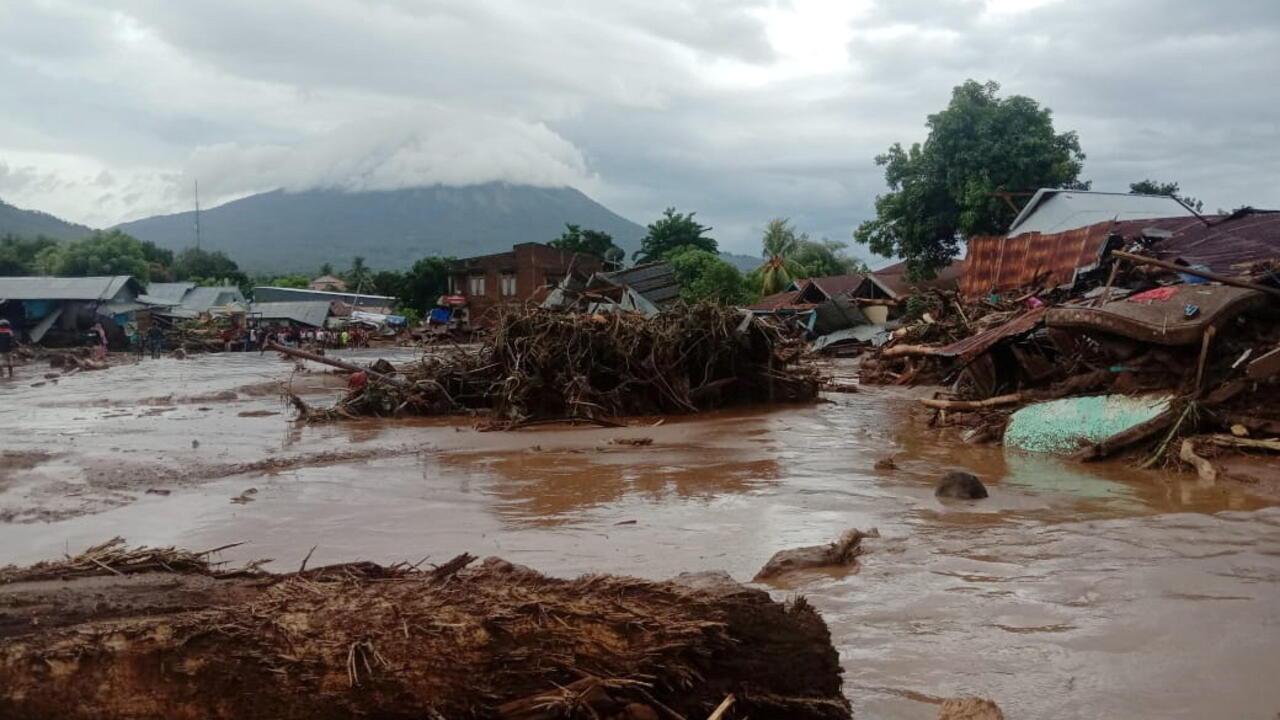 Downpours are expected over the next day as the storm triggers offshore waves as high as six metres (20 feet), Indonesia‘s disaster agency said.

The cyclone, which was picking up strength as it moved towards the west coast of Australia, hampered efforts to reach trapped survivors.

At least 86 people have been killed in Indonesia, with another 71 missing, while 27 have died in East Timor, a tiny half-island nation of 1.3 million that lies between Indonesia and Australia.

Its capital Dili was inundated, with the front of its presidential palace transformed into a mud pit.

Disaster flash flood in Adonara, Indonesia April 4, 2021 RIP to those who have lost their lives. Climate change is worsening flooding . Don’t build near flood plains Build concrete or heavy timber walls to protect your home for those who can. https://t.co/1n5WsQkzdG @YouTube

Swept down a mountainside

Images from Indonesia’s search and rescue agency showed workers digging up mud-covered corpses before placing them in body bags.

On Lembata, an island east of Flores, parts of some villages were swept down a mountainside and carried to the shore of the ocean.

Soon after flash floods began tearing into resident Basir Langoday’s district in the early morning, he heard screams for help from a nearby home covered in rubble.

“There were four of them inside. Three survived but the other one didn’t make it,” he told reporters.

Langoday and his friends scrambled to try and save the trapped man before he was crushed to death.

“He said ‘hurry, I can’t hold on any longer,” Langoday added.

Juna Witak, another Lembata resident, joined his family at a local hospital where they wept over the corpse of his mother, who was killed in a flash flood Sunday. Her body was found by the seashore.

“There was a rumbling sound and the floods swept away homes, everything,” Witak said.

The European Union said it was ready to offer assistance to poverty-stricken East Timor, officially known as Timor-Leste.

“The catastrophic floods come at a time when Timor-Leste is working hard to contain the spread of Covid-19 among its population, putting a considerable additional strain both on resources and on the Timorese people,” the EU said.

Among those left homeless by the disaster was mother-of four Epifania Gomes, who took shelter with her husband and family on the porch of a locked church near Dili.

“It’s hard to find clean water. We haven’t bathed because there’s no shower or toilet, so we had to defecate in the bushes,” she told AFP.

Indonesian President Joko Widodo expressed his “deepest condolences” over the devastation in the southeast end of the archipelago.

Thousands have flocked to temporary shelters, where there are shortages of medicine, food and blankets, said Alfons Hada Bethan, head of the East Flores disaster agency.

“We suspect many people are buried but it’s not clear how many are missing,” Bethan said.

In Lembata, local officials were forced to deploy heavy equipment to reopen the roads.

Images from the island showed barefoot locals wading through mud and past collapsed houses to evacuate victims on makeshift stretchers.

Fatal landslides and flash floods are common across the Indonesian archipelago during the rainy season.

And last September, at least 11 people were killed in landslides on Borneo.

The disaster agency has estimated that 125 million Indonesians — nearly half of the country’s population — live in areas at risk of landslides.

The disasters are often caused by deforestation, according to environmentalists.