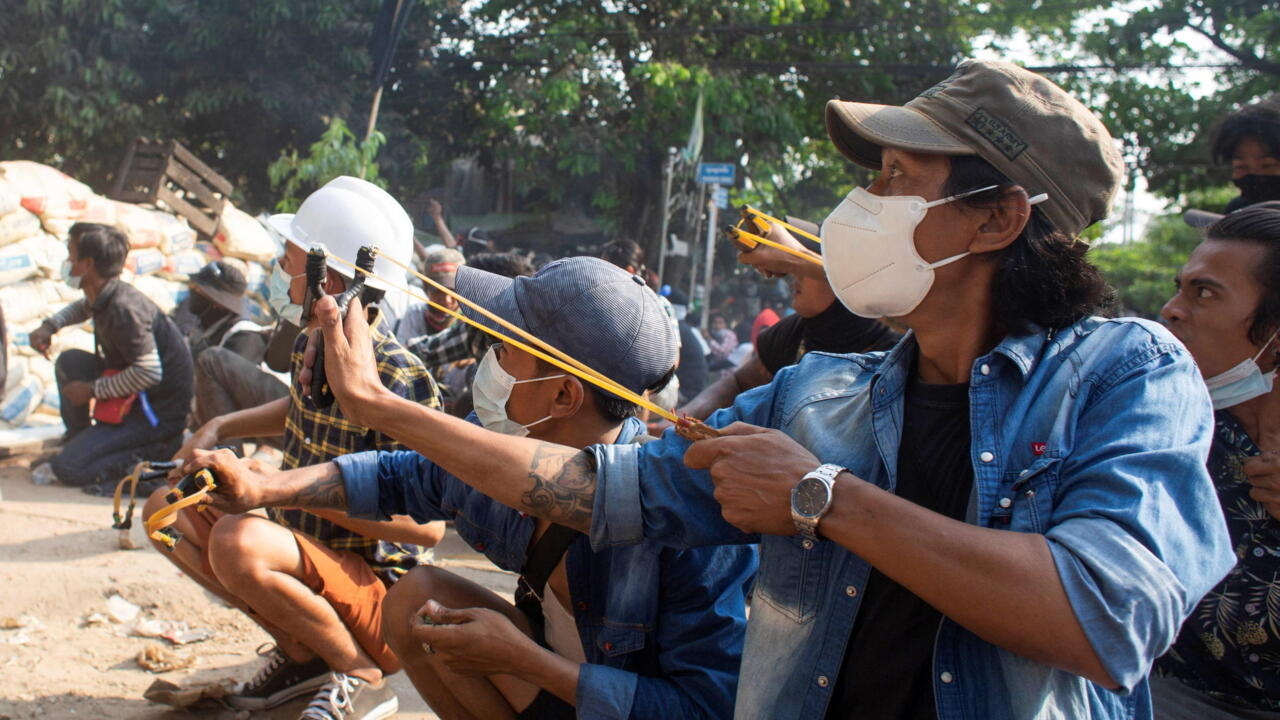 Myanmar security forces opened fire at a funeral on Sunday, witnesses said, as people across the country gathered to mourn 114 people killed the previous day in the worst crackdown on protests since last month’s military coup.

Mourners fled the shooting at a service for 20-year-old student Thae Maung Maung in Bago near the commercial capital Yangon and there were no immediate reports of casualties, three people in the town told Reuters.

“While we are singing the revolution song for him, security forces just arrived and shot at us,” a woman called Aye who was at the service said. “People, including us, run away as they opened fire.”

Another 12 people were recorded dead in incidents elsewhere in Myanmar by the Assistance Association for Political Prisoners advocacy group on Sunday, taking its total toll of civilians killed since the Feb. 1 coup to 459.

Thousands of villagers in a border area fled to Thailand after military air strikes on one of several ethnic militias that have stepped up attacks since the coup, witnesses and local media said.

There were no reports of large-scale protests in Yangon or Mandalay, which bore the brunt of the casualties on Saturday, Myanmar’s Armed Forces Day. But people in Mandalay surrounded a police station late in the evening, accusing the security forces of arson after five houses burned down, residents said.

At least six children between the ages of 10 and 16 were among those killed on Saturday, according to news reports and witnesses. Protesters call the victims “Fallen Stars”.

The bloodshed drew renewed Western condemnation. The U.N. Special Rapporteur for Myanmar said the army was carrying out “mass murder” and called on the world to isolate the junta and halt its access to weapons.

Foreign criticism and sanctions imposed by some Western nations have failed so far to sway the military leaders, as have almost daily protests around the country since the junta took power and detained elected leader Aung San Suu Kyi.

“We salute our heroes who sacrificed lives during this revolution and We Must Win This REVOLUTION,” one of the main protest groups, the General Strike Committee of Nationalities (GSCN), posted on Facebook.

Heavy fighting also erupted between the army and some of the two dozen ethnic armed groups that control swathes of the country.

About 3,000 people fled to neighbouring Thailand after military jets bombed areas controlled by the Karen National Union (KNU) militia near the border, an activist group and local media said.

In an air attack by the military on Saturday, at least three civilians were killed in a village controlled by the KNU, a civil society group said. The militia earlier said it had overrun an army post near the border, killing 10 people.

Fighting also erupted on Sunday between another armed group, the Kachin Independence Army, and the military in the jade-mining area of Hpakant in the north. The Kachin forces attacked a police station and the military responded with an aerial assault, Kachinwaves media reported.

There were no reports of casualties.

A junta spokesman did not answer calls seeking comment on the killings or the fighting.

Senior General Min Aung Hlaing, the junta leader, said during a parade to mark Armed Forces Day that the military would protect the people and strive for democracy.

Countries including the United States, Britain, Germany and the European Union again condemned the violence.

The EU’s top diplomat, Josep Borrell, called on Myanmar’s generals to stand down from what he called a “senseless path” of violence against their own people.

“We will continue to use the EU’s mechanisms, including sanctions, to target the perpetrators of this violence, and those responsible for turning back the clock on Myanmar’s path of democracy and peace,” Borrell said in a statement.

German Foreign Minister Heiko Maas said on Twitter: “We will not tolerate the military’s brutal course of action against the people of Myanmar”.

U.N. Special Rapporteur Tom Andrews said the junta should be cut off from funding, such as oil and gas revenues, and from access to weapons.

“Words of condemnation or concern are frankly ringing hollow to the people of Myanmar while the military junta commits mass murder against them,” he said in a statement.

The top military officer from the United States and nearly a dozen of his counterparts said a professional military must follow international standards for conduct “and is responsible for protecting – not harming – the people it serves”.

Myanmar’s military took power saying that November elections won by Suu Kyi’s party were fraudulent, an assertion dismissed by the country’s election commission. Suu Kyi remains in detention at an undisclosed location and many other figures in her party are also in custody.