World Cup champion, US soccer player and longtime equal pay advocate Megan Rapinoe highlighted the ongoing inequities and discrimination women face when it comes to compensation and sports, as part of her testimony Wednesday before Congress.

“What we’ve learned, and what we continue to learn, is that there is no level of status – and there’s no accomplishment or power – that will protect you from the clutches of inequity,” Rapinoe said during a hearing in the House Oversight Committee meant to explore the systemic inequalities that have led to women to continue to be underpaid. “One cannot simply outperform inequality or be excellent enough to escape discrimination of any kind.”

Listing out the ways she and her teammates are still not treated on par with their male counterparts despite their numerous accolades on the world stage, Rapinoe said, “If it can happen to us, and it can happen to me, with the brightest light shining on us at all times, it can and it does happen to every person who is marginalized by gender.”

Rapinoe also addressed how the NCAA has provided unequal amenities to the men and women’s basketball teams for their respective NCAA basketball tournaments, citing the instance as just the latest example of women receiving strikingly less resources than their male athletic colleagues.

“For an organization like the NCAA, similar to the US Soccer Federation, that’s a non-profit – it’s just absolutely unacceptable,” Rapinoe said. “For Mark Emmert and the executives at the NCAA, you just simply have to do better.” 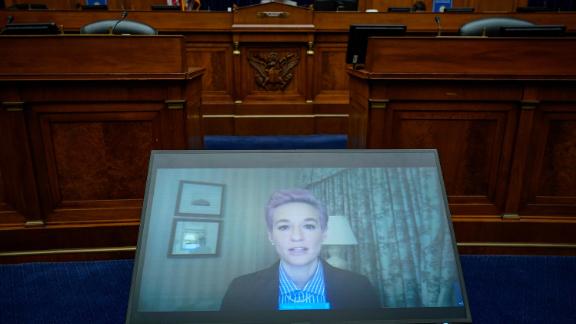 At one point during the hearing, Rapinoe was asked by GOP Rep. Scott Franklin of Florida if she thought it put women at an unfair advantage to allow transgender women to participate in women’s sports.

“As a member of the LGBTQ community, I firmly stand with the trans family and that whole community. And as someone who has played sports with someone who is trans I can assure you all is well, nothing is spontaneously combusting,” Rapinoe said.

When pressed further by Franklin, Rapinoe stated, “I think that’s the reason that we want our kids to play sports is for all of the incredible aspects and character building and community building and self confidence building that happens in sports. And to completely cut out an entire section of people, I don’t think is appropriate.”

Republican freshman Rep. Nancy Mace of South Carolina asked Rapinoe why the US women’s soccer team is still pursuing higher wages if Rapinoe said she was satisfied with a previous collective bargaining settlement after a federal judge rejected the players’ claims that they were paid less than the men’s national team in their lawsuit.

Democrats leading the hearing sought to lay out how race has a disproportionate impact on a woman’s compensation, and highlighted how the coronavirus pandemic has only exacerbated the gender and racial inequalities that exist.

The United States Census Bureau announced in September 2020 that in 2019, the female-to-male earnings ratio was .823, a disparity that had remained stagnant from the previous year. That pay gap increases when examining compensation along racial lines: Hispanic women earned 58.7% of White non-Hispanic men and Black women earned 63.6% of White non-Hispanic men, according to 2020 data from the Institute for Women’s Policy Research.

The pandemic exacerbated the inequalities women experience in the work force even more dramatically. From February to April 2020, the unemployment rate for women rose roughly 12 percentage points whereas it only raised by 9 percentage points for men in that same period, according to the US Bureau of Labor Statistics. And as the Brookings Institute highlighted, much of that job loss was the result of women becoming unemployed because of a lack of childcare, at twice the rate of men.

Most Republicans speaking at the hearing argued that adjusting for a variety of factors, including that women often work fewer hours and have more flexible schedules, makes the wage gap much smaller. They argued that legislation such as the Paycheck Fairness Act, which is supposed to create an equal wage, would ultimately lead to fixed pay scales that would hurt businesses.

GOP Rep. Pat Fallon of Texas argued that if the wage gap were real, business owners would hire women as their entire work force because it would save their bottom line.

“That doesn’t happen. And why? Because this alleged wage gap is grossly overstated and exaggerated for political benefit,” Fallon claimed.

Instead, Fallon laid out his belief that lawmakers should allow the free market to operate without government interference.

03:39 – Source: CNN Business
What you can do to help close the gender pay gap

Fallon’s testimony sent shockwaves among Democrats and many testifying during the hearing.

“Oh my God,” Democratic Rep. Gerry Connolly of Virginia said. “What we just heard requires you to forget the blatant history of exclusion and discrimination and direction with respect to women’s careers.”

Chief Executive Officer of Institute for Women’s Policy Research Nicole Mason also responded to Fallon’s comments by saying, “We live in a market economy, but the market economy is not working for women, people of color, workers who are in sectors that are lower wage and lower earning.”

Even Mace, who admitted that she has seen gender discrimination throughout her career working in male dominated fields argued, “Once adjusted for hours worked and compensation packages, family, and marital status, the gender wage gap I believe is significantly smaller than what we’re talking about today.”

Despite Republican pushback throughout the hearing about the Paycheck Fairness Act, House Speaker Nancy Pelosi announced Wednesday in her statement commemorating Equal Pay Day that the House would take up the legislation next month.

24 products our editors tried and loved in April

Experts are divided on the new CDC mask guidance. Here’s what they’re saying.