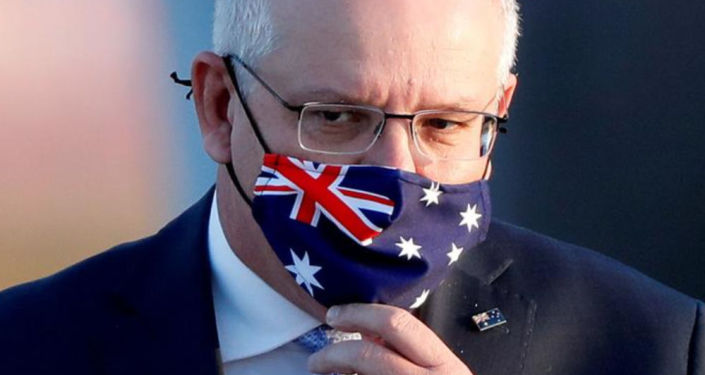 Earlier on Monday, a parliamentary insider leaked photos and videos to the media showing at least four staffers for members of Morrison’s coalition performing lewd solo sex acts inside the building, including one performed on a female MP’s desk.

“Other images were ‘so bad’ and ‘shocking’ that they couldn’t be shown by the network at all,” news.com.au noted. The photos reportedly came from a Facebook Messenger group where staffers proudly swap the images. The insider revealed other information from the group, such as that the building’s Prayer Room is commonly used by staffers for sex.

The outlet noted that at least one staffer has been fired in connection with the leaks.

The revelation also comes in the wake of accusations by Brittany Higgins, a member of Defense Minister Linda Reynolds’ staff, who alleged she was raped by a male colleague in Reynolds’ office after hours. Since she came forth, two other women have made similar claims about the same man.

The wave of revelations of abuse has sparked mass protests against sexual harassment and abuse of women, with tens of thousands protesting earlier this month in what Australian media has called the largest uprising of women ever seen in the country.

In response to the wave of scandals, Morrison pledged on Monday to “get this house in order.”

“These events have triggered, right across this building and indeed right across the country, women who have put up with this rubbish and this crap for their entire lives, as their mothers did, as their grandmothers did. It has been going on, we have been talking about it in this place for a month, they have been living with it for their entire lives,” Morrison noted.

“The women listening to me today know that to be true, so as much as it has been a topic of discussion here, and around the country specifically in relation to these disgraceful acts, it is something that has been the lived experience of Australian women for a very long time, and I welcome the spotlight that has now been placed on this,” he said.

Morrison also apologized for having invoked his wife and daughters in his initial response to Higgins’ revelations, saying that “no offense was intended,” but he also acknowledged that they had upset many people.

Iranian-American Nuclear Talks and the Trouble Brewing in Ukraine