EU, US impose new sanctions on Myanmar junta over coup and protest crackdown 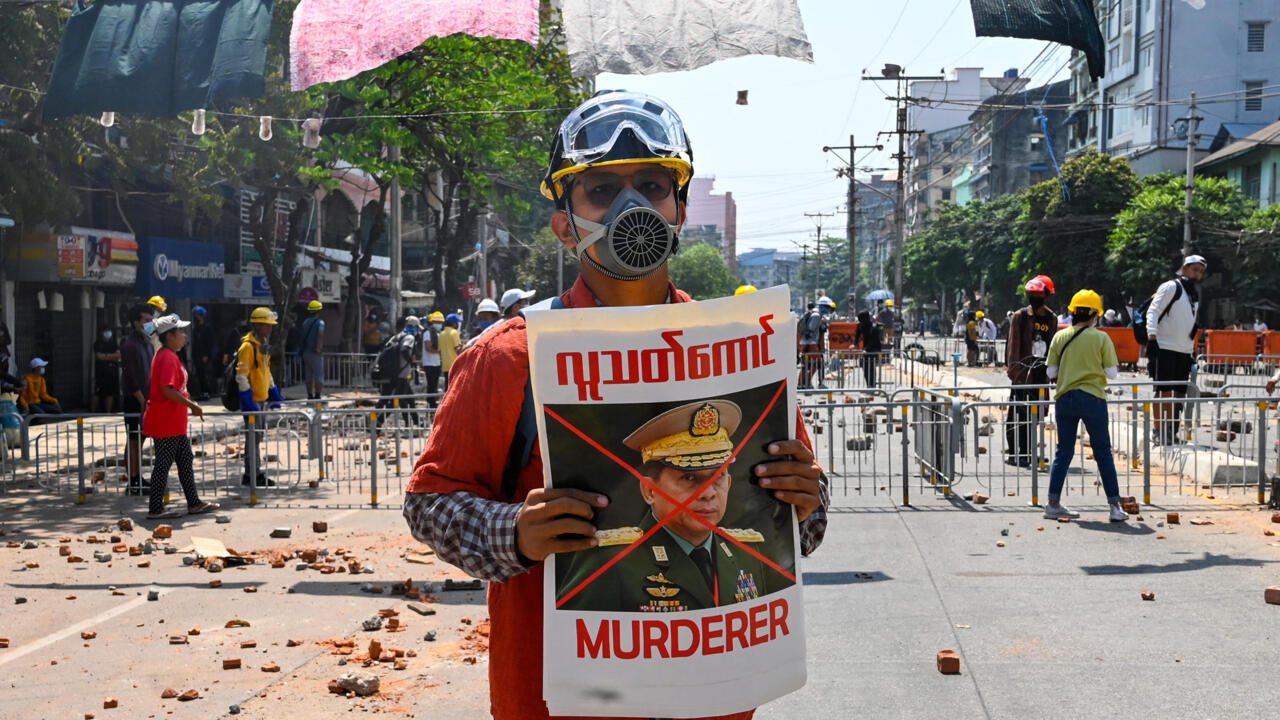 The European Union and the United States slapped sanctions Monday on top police and military commanders linked to last month’s coup in Myanmar, as pro-democracy demonstrators went back to the streets in defiance of a violent crackdown on protest.

The junta is increasingly using deadly force to crush activists who have risen up against the military’s ousting of civilian leader Aung San Suu Kyi on February 1.

In a bid to pile international pressure on the regime, the European Union on Monday placed Myanmar junta chief Min Aung Hlaing on an assets freeze and visa ban blacklist.

Min Aung Hlaing is “responsible for undermining democracy and the rule of law in Myanmar”, its official journal said.

The EU also hit nine other senior military officers and the head of Myanmar’s election commission with travel bans and asset freezes, in the 27-nation grouping’s most extensive response yet to the February 1 coup.

In Washington, the Treasury Department sanctioned Myanmar’s police chief and an army special operations commander, saying they were responsible for using lethal force against demonstrators.

When anti-coup protests began the security forces did not use force to counter demonstrators—but since Than Hlaing was made police chief and deputy home affairs minister on February 2 “Burma’s police have engaged in brutal acts of violence against pro-democracy protesters,” it said, using an alternate name for Myanmar.

Army commander Aung Soe was responsible for sending in troops to confront protesters using battlefield weapons and tactics, “demonstrating that lethal force is being used in a planned, premeditated and coordinated manner against the anti-coup protests,” the Treasury Department said.

Myanmar’s top junta leaders are already under US sanctions.

More than 2,600 people have been arrested and 250 killed since the coup, according to the Assistance Association for Political Prisoners (AAPP), a local monitoring group that has warned fatalities could be even higher.

One of those held, Aung Thura, a journalist with the BBC’s Burmese service, was freed on Monday, the broadcaster said in a news story on its website.

Men in plain clothes detained him while he was reporting outside a court in the capital Naypyidaw on Friday. A second journalist detained at the same time, Than Htike Aung from the local outlet Mizzima, remains in custody.

The junta has sought to stem the flow of news about the protests and crackdown, revoking the licenses of independent local media—including Mizzima—raiding newsrooms and arresting journalists.

>> Myanmar’s anti-coup uprising: A humanitarian catastrophe in the making

Scores of people, including teachers, marched on Monday through the pre-dawn streets of Mandalay, the country’s second-largest city, some carrying placards calling for UN intervention in the crisis.

Mandalay has seen some of the worst violence of the crackdown and recorded eight more deaths on Sunday, a medical source told AFP, adding that as many as 50 people were wounded.

Machine gun fire rang out late into the night across the city of 1.7 million.

“People were really scared and felt insecure the whole night,” a doctor told AFP by phone.

To protest against the brutal crackdown, a group of doctors in Mandalay staged a “placard only” demonstration by lining up signs in the street, Voice of Myanmar reported.

A group of monks staged a similar “monkless” protest.

There were also early morning protests in parts of Yangon, the commercial capital and country’s largest city, where drivers honked their horns in support of the anti-coup movement.

And hundreds demonstrated in the central city of Monywa, angry over the death of a man killed during clashes Sunday with security forces, according to local media.

“The number of murders has reached an unbearable level, and that is why we will not be able to avoid imposing sanctions,” said Germany’s Heiko Maas as EU foreign ministers gathered in Brussels to sign off on the sanctions.

The latest EU and US sanctions “send a strong signal that we will… continue to take action against coup leaders and those who perpetrate violence,” said US Secretary of State Anthony Blinken.

In the region, Indonesia and Malaysia called for an emergency summit of the 10-country Association of Southeast Asian Nations to discuss the crisis.

On the commercial front, French energy giant EDF announced that a $1.5-billion hydropower dam project in Myanmar had been suspended in response to the coup.

Matthew O’Kane and Christa Avery, a dual Canadian-Australian citizen, are reportedly under house arrest after trying to leave the country on a relief flight Friday.

The couple run a consultancy business in Yangon.

The Canadian and Australian foreign ministries have refused to comment further on the case.

US report on Khashoggi does not prove accusations, Saudi Arabia’s UN envoy says

Israelis head to the polls, voting on Netanyahu for the fourth time in two years