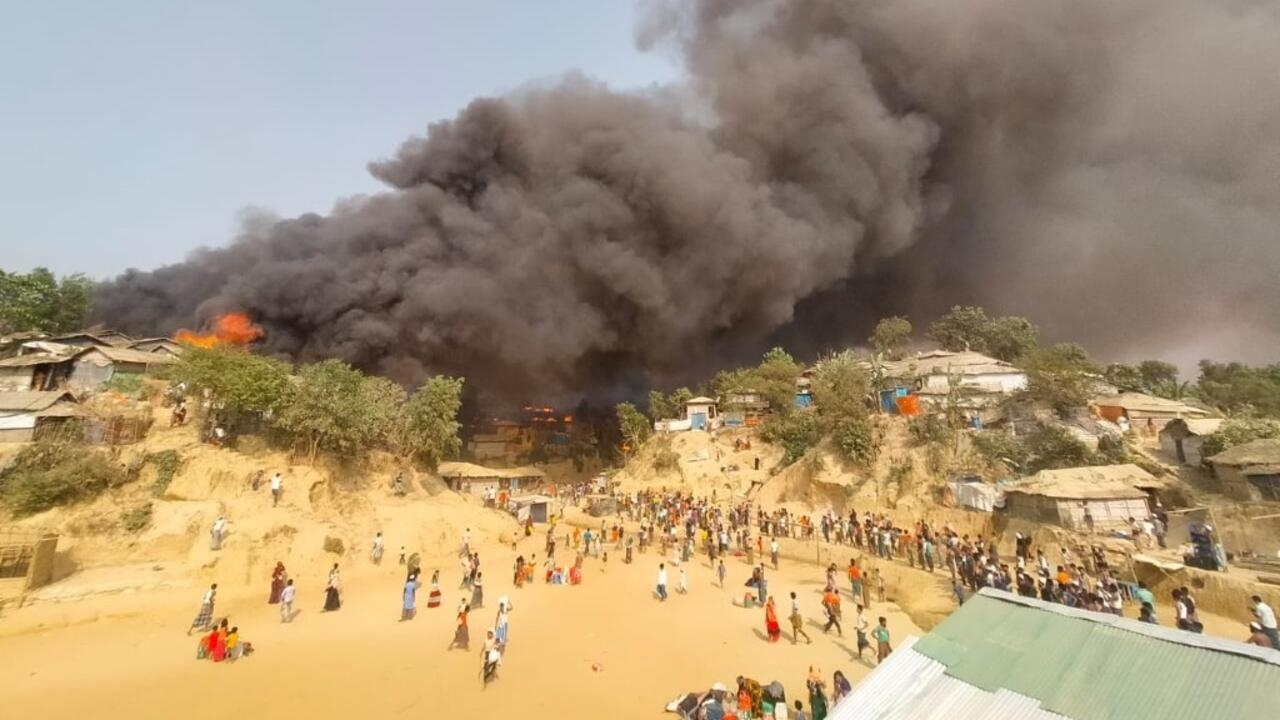 Fifteen people have died and 400 are missing after a huge fire destroyed the shanty homes of tens of thousands of Rohingya in the world’s biggest refugee settlement in Bangladesh, the UN said Tuesday.

Nearly one million of the persecuted Muslim minority—many of whom escaped a 2017 military crackdown in Myanmar that UN investigators concluded was executed with “genocidal intent”  — live in squalid conditions at the network of camps in the  southeastern Cox’s Bazar district.

The fire broke out Monday and left at least 50,000 people homeless as it ripped through their flimsy bamboo-and-tarpaulin shelters, according to police and aid groups. Terrified families fled with whatever they could carry, with distraught children separated from their children in the rush.

It was just the latest blaze in recent weeks—and the biggest since 2017. Bangladesh has ordered a probe.

“People ran for their lives as it spread fast. Many were injured and I saw at least four bodies,” said Aminul Haq, a refugee.

“What we have seen in this fire is something we have never seen before in these camps. It is massive. It is devastating,” Van der Klaauw told reporters in Geneva via videolink.

Officials said the blaze appeared to have started in one of the 34 camps—which span about 8,000 acres (3,200 hectares) of land—before spreading rapidly to three other sites despite desperate efforts to put out the flames.

Thick columns of smoke could be seen billowing from blazing shanties in a video shared on social media, as hundreds of firefighters and aid workers pulled refugees to safety.

Firefighters finally brought the blaze under control around midnight.

Mohammad Yasin, a Rohingya helping with the firefight, told AFP the blaze raged for more than 10 hours and was the worst he had seen.

A volunteer for Save the Children, Tayeba Begum, said “children were running, crying for their families”.

Refugees International said in a statement: “Many children are missing, and some were unable to flee because of barbed-wire set up in the camps.”

This was echoed by Myo Min Khan, a Rohingya, who wrote on Facebook: “We were unable to flee because of the fence, my youngest daughter got injured badly.”

AFP was not independently able to verify the claims about the fence.

Police rejected the accusation, saying only a tiny part of the camp was fenced.

“This tragedy is an awful reminder of the vulnerable position of Rohingya refugees who are caught between increasingly precarious conditions in Bangladesh and the reality of a homeland now ruled by the military responsible for the genocide that forced them to flee,” Refugees International said.

The UN’s International Organization for Migration said it has pledged $1 million to relief efforts but a further $20 million would be required to react to the most urgent needs.

Sikder said the cause of the blaze was not yet known.

Rohingya leader Sayed Ullah demanded an immediate probe. “It is not clear why these fire incidents are happening repeatedly in the camps. It needs proper and complete investigation,” he said.

The government has meanwhile been pushing for the refugees to be relocated to a remote island in the Bay of Bengal, saying the settlements were too crowded.

So far, 13,000 Rohingya have been moved to the flood-prone island, which critics say is also in the path of deadly cyclones.