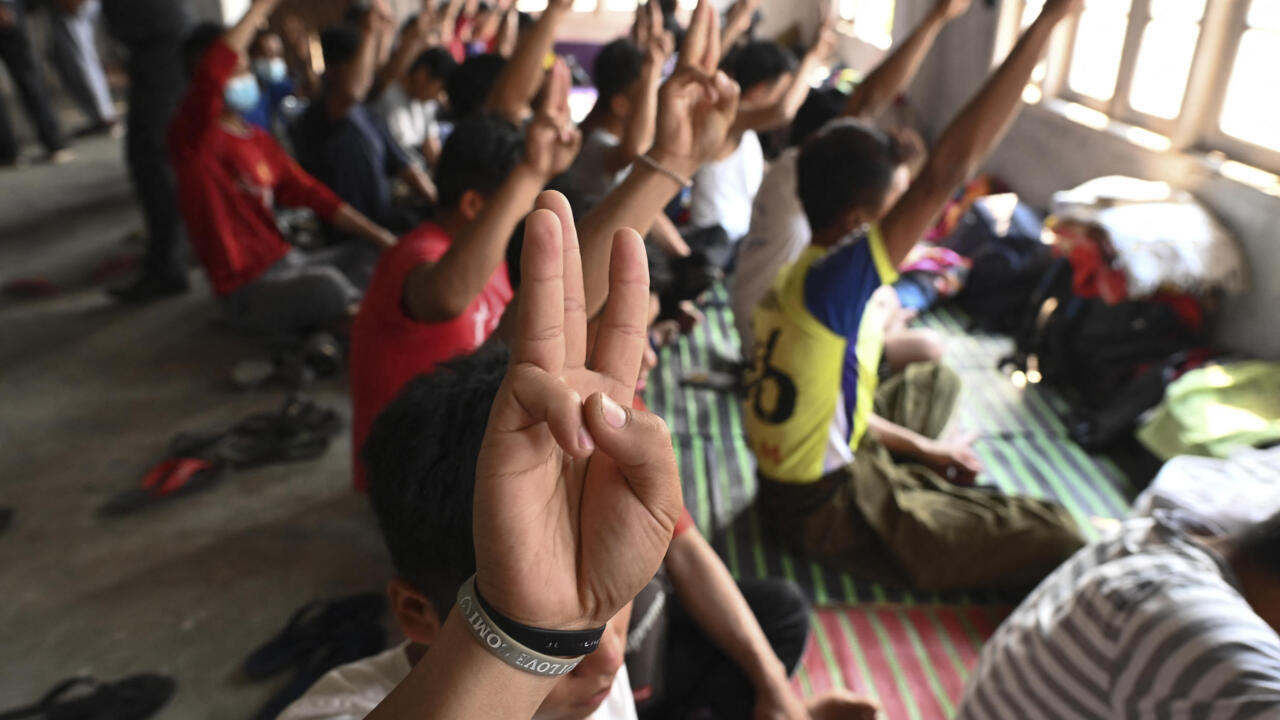 The arrival in India of Myanmar nationals, who say they are police officers fleeing junta orders to shoot at unarmed demonstrators protesting against the February coup, has put India in a sensitive position. The popular mood in India’s border Mizoram state to help ethnic kin across the border must be balanced with regional geostrategic interests.

When Myanmar’s military seized power in a February 1 coup, authorities and residents in the northeast Indian state of Mizoram immediately knew their state – which shares a 404-kilometre border with Myanmar – would catch a cold from the junta’s latest sneeze.

The Mizos of Mizoram have ethnic and cultural ties with the Chins across the border in Myanmar’s western Chin state. Both Mizos and Chins belong to the Zo ethnic group, which was divided by colonial borders that were accepted by postcolonial administrations in India, Myanmar and Bangladesh.

Mizoram’s residents were unequivocal about which side they supported in the oncoming clash between Myanmar’s military – called the Tatmadaw – and its citizens. Just two days after the shock coup announcement, students in Mizoram’s capital, Aizawl, held demonstrations where banners demanding the restoration of democracy and proclaiming solidarity with “our Zo brothers in Myanmar” were displayed.

Mizo artists and musicians got on the job, producing artworks and songs assuring their fellow Zos in Myanmar that their protests against the dreaded Tatmadaw – which has cracked down against the ethnic Chin minority in the past – would not go unheard across the border.

“To all my brothers and sisters of Myanmar, I just want to let you know that you are not alone in the struggles you’re facing right now,” intoned Mizoram’s best-known singer, Rebecca Saimawii, in a YouTube clip, before singing the revolutionary Burmese song, Kabar Ma Kyay Bu, which has turned into an anthem of sorts of the 2021 civil disobedience movement.

The discourse of Mizoram’s state authorities mirrored the popular mood. “If the people of Myanmar have to flee the military, Mizoram will welcome them with open arms and give them food and shelter,” Mizoram Chief Minister Zoramthanga – who uses one name – told the state assembly on February 25.

So, when small groups of Chins began crossing the shallow Tiau River into India’s remote northeastern border districts, it was an expected development that would have gone largely unnoticed by the Indian national, and certainly the international, media.

But by the end of February, reports emerged that the refugees included less than a dozen police officers who said they were fleeing Tatmadaw orders to shoot at unarmed demonstrators protesting the coup.

The development was “not surprising” but certainly “politically important”, according to Avinash Paliwal of London University’s School of Oriental and African Studies. “It shows that police officers are defecting, that there is resistance within Burmese institutions. They don’t want to shoot and kill unarmed protesters,” he explained.

It wasn’t long before Myanmar asked India to return the police officers. A district official in Mizoram told Reuters she received a letter from her counterpart in Myanmar’s Chin state that they had information about eight police officers who had crossed into India. “In order to uphold friendly relations between the two neighbour countries, you are kindly requested to detain eight Myanmar police personnel who had arrived to Indian territories [sic] and hand over to Myanmar,” the letter said.

The development put Indian authorities in a sensitive situation, one they would have preferred to handle quietly, away from the international media gaze, as they have in the past.

But the 2021 civil disobedience movement in Myanmar is unlike any of the previous protest movements in the 1980s and 1990s.

As the Tatmadaw unleashes a vicious crackdown on an unarmed citizenry, the bloodshed is unfolding in plain sight on social media, captured by tech-savvy young protesters manoeuvering Internet blackouts, and disseminated by activists and diaspora groups incensed by the human rights abuses.

Statements by regional and global powers, as well as multilateral bodies such as the UN, are parsed by concerned communities frustrated by the world’s incapacity to stop the brutality as death tolls rise with the junta showing no signs of bowing down to international opprobrium.

The outrage is also brewing in a region of intense strategic competition, where a soft power battle for hearts and minds – and markets – of the world is being waged in a pandemic age.

Myanmar’s location between India and China puts a spotlight on Asian powers that welcomed the Tatmadaw’s 2011 experiment with “tutelage democracy”, investing in massive infrastructure projects with little regard for the lack of scrutiny and civil rights guarantees in the country.

With China and India, the world’s most populous nations, waging a great game of strategic influence in Myanmar, the country’s opposition movement is intensely focused on how their giant Asian neighbours respond to the current crisis.

Protesters staged demonstrations outside the Chinese embassy in Myanmar’s commercial capital, Yangon, weeks after the coup, accusing Beijing of supporting the military junta despite Chinese denials.

Meanwhile the Indian embassy in Myanmar earlier this month was forced to put out statements on Facebook and Twitter blasting “mischievous and biased” reports that India was among a group of nations – including China, Russia and Vietnam – that watered down a draft UN Security Council resolution that included the removal of any reference to a “coup”.

The recent request by a Chin state official to his Indian counterpart in Mizoram asking for the return of the police officers sparked a prompt response from the Indian central government in New Delhi.

Amid reports of hundreds of refugees, including women and children, crossing the frontier, India’s home [or interior] ministry last week issued a communiqué to officials in four states bordering Myanmar to take steps to prevent an illegal influx from the neighbouring country.

Law enforcement officials were directed to take “prompt steps in identifying the illegal migrants and initiate the deportation processes expeditiously and without delay”, according to Indian media reports.

“The Mizoram state government had a more humanitarian approach that people with social linkages and historic ties across the border were in distress and fleeing persecution. Their stance was pretty clear, they didn’t mean to try to undermine India’s foreign policy towards Myanmar. But it puts New Delhi in an awkward position especially since Myanmar asked New Delhi to extradite the police officers,” explained Paliwal.

Vulnerable refugee groups at the mercy of national, regional interests

The plight of the Myanmar migrants in Mizoram was taken up by the New Delhi-based NGO, the National Campaign Against Torture (NCAT), which filed a complaint to India’s National Human Rights Commission (NHRC) on March 8, urging it to process asylum applications. “The 11 Myanmar police personnel who refused to obey orders to crack down on the peaceful pro-democracy activists face certain torture and possibly death sentences in case of refoulement to Myanmar by the Government of India,” said NCAT coordinator, Suhas Chakma, in a statement.

But a week later, Chakma had still not received replies to the complaint or any word from local authorities on asylum applications. The National Human Rights Commission failed to respond to FRANCE 24’s queries despite repeated attempts.

“The government of India has directed the state government of Mizoram not to speak about the issue or about standard operating protocols because India and Myanmar have a very delicate relationship in terms of insurgent groups on both sides of the border,” explained Chakma in a phone interview with FRANCE 24 from New Delhi. “I hope the NHRC will take a decision that’s fair and impartial and also timely without delaying it to wait for the situation to cool down.”

India is not a signatory to the 1951 UN Refugee Convention and its 1967 Protocol, a fact emphatically noted in the Indian home ministry’s letter to local authorities in the border states requesting them to “take appropriate action as per law to check illegal influx from Myanmar into India”.

“The fact that India doesn’t have a law to assist applications for naturalisation and refugee status leaves victims at the mercy of the central government,” explained Chakma. “If it’s a politically, or a geopolitically, important group, such as the Tibetans, nobody touches them.”

India is home to hundreds of thousands of refugees primarily from South Asia, and the United Nations High Commission for Refugees (UNHCR) supports the Indian government with programmes assisting refugees fleeing conflicts and natural disasters.

But the fates for vulnerable refugee groups, such as the Rohingya Muslims, in India are precarious, subject to domestic religious nationalism or regional geopolitical concerns.

The Indo-Myanmar border region has been host to myriad armed ethnic groups on both sides of the 1,400-kilometre frontier for decades.

The Tamadaw’s troubled relationship with Myanmar’s diverse ethnic minorities has swung from deadly “pacification” operations to ceasefires that open resource-rich border areas to infrastructure projects and investments in what some experts call “ceasefire capitalism”.

However, the ceasefire deals tend to be precarious as locals – deprived of their lands while deriving little or no advantage from projects that enrich the Tatmadaw – join militant splinter groups, keeping up low intensity insurgencies in Myanmar’s border areas.

India has also faced a low intensity insurgency problem along its Myanmar border that has subsided in recent years. While any problem along India’s western border with Pakistan will dominate the national news for weeks, the insurgencies in India’s northeastern states however tend to be overlooked.

In early 2019, for instance, while the media was focused on India-Pakistan tensions following an attack on Indian soldiers in Kashmir, the Indian and Myanmar armies conducted major joint operations targeting ethnic militant groups along the India-Myanmar border. The insurgents were targeted for threatening the Kaladan Project that will link Myanmar’s Sitwe seaport to India’s Mizoram to the north and Calcutta to the west, according to Indian media reports.

A year later, the Tatmadaw handed over 22 militants captured in Myanmar to India in what was described as a “huge message” to insurgent groups “that Naypyidaw is in sync with New Delhi”.

Playing off India and China

Myanmar is strategically important for New Delhi, particularly under the current administration’s “Act East” policies aimed at extending India’s economic relations with Southeast Asia.China, which has a bigger political and economic footprint in Myanmar, considers its southern neighbour part of its historic zone of influence, one that is increasingly important for Beijing’s maritime access to the Bay of Bengal and the Andaman Sea.

Aware of the competition, the Tatmadaw has effectively played off its competing neighbours, drawing in Indian investments in a bid to decrease China’s strategic hold on Myanmar.

Both India and China cooperated with Myanmar’s ousted leader, Aung San Suu Kyi and her National League for Democracy (NLD) party before the February 1 coup. But with senior NLD leaders – including Suu Kyi – behind bars since the military takeover, Beijing and New Delhi have to play a delicate balancing act in Myanmar.

“India is very concerned that the junta doesn’t go exclusively in the hands of China, so Myanmar’s refugees are a very sensitive issue,” explained Chakma.

“China and India are unhappy with the coup because it affects stability and their economic interests in the region. But every country knows they have to deal with the Tatmadaw. New Delhi has a delicate balancing act maintaining pressure on the Tatmadaw while ensuring stability, the safety of the Indian community in Myanmar, and its interests,” explained Paliwal. “But these regional powers risk becoming truly redundant in a political sense if they don’t work together to find a quick solution to the crisis. Indian and Chinese infrastructural connectivity projects will suffer hugely with acute instability and civil violence in Myanmar.”

Germany, Netherlands among squads championing human rights ahead of 2022 World Cup in Qatar