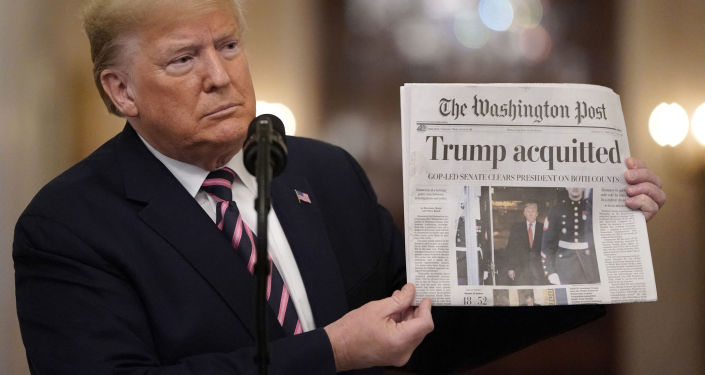 Former US President Donald Trump said in a statement on Monday that he “appreciates” The Washington Post (WaPo) correcting its story about the 23 December phone call between him and Georgia’s top elections investigator Frances Watson.

WaPo’s lengthy correction came after the newspaper asserted in early January that then-President Trump told Watson during the said telephone call to “find the fraud” and that she would be “a national hero” if she did so.

‘You will notice that establishment media errors, omissions, mistakes, and outright lies always slant one way—against me and against Republicans.’

But still an appreciation for the correction in un-Trump like reaction. pic.twitter.com/3sqKPbVbVB

In the 15 March statement, the ex-POTUS added that he would further appreciate “a strong investigation into Fulton County, Georgia, and the Stacey Abrams political machine, which, I believe, would totally change the course of the presidential election in Georgia”.

“You will notice that establishment media errors, omissions, mistakes, and outright lies always slant one way—against me and against Republicans”, Trump added, describing The Washington Post’s original story as “a hoax right from the very beginning”.

The remarks followed WaPo referring to an audio recording of the Trump-Watson phone call released by Georgia Secretary of State Brad Raffensperger, which revealed that the newspaper “misquoted Trump’s comments on the call, based on information provided by a source”, according to paper’s correction.

“Trump did not tell the investigator to ‘find the fraud’ or say she would be ‘a national hero’ if she did so. Instead, Trump urged the investigator to scrutinize ballots in Fulton County, Ga., asserting she would find ‘dishonesty’ there. He also told her that she had ‘the most important job in the country right now'”, The Washington Post emphasised.

The developments were preceded by an earlier leaked recording of a 2 January phone call between the former US president and Raffensperger himself, in which Trump is heard requesting the Georgia secretary of state to “find” additional votes to make him the winner of the 3 November election, which the then-POTUS claimed was stolen from him.

“All I want to do is this: I just want to find 11,780 votes, which is one more than we have”, Trump said, apparently referring to the narrow margin of then-President-elect Joe Biden’s victory in Georgia.

The 45th US president, who left office 20 January, had repeatedly claimed that the 3 November election was “stolen” due to massive “voter fraud”. Trump’s attempts to challenge the election results ended in failure and his “fraud” claims were never confirmed.

Asserting that it was him, not Democrat Joe Biden, who won the swing states, including Georgia, Trump eventually pledged an orderly transition of power in the US.

An Olympic Medal in Tokyo Could Prove to Be Defining Moment for Fencing in India, Bhavani Devi Says