Counted Out: Why the Four Kings of Boxing Will Not be Reunited for Marvin Hagler’s Funeral 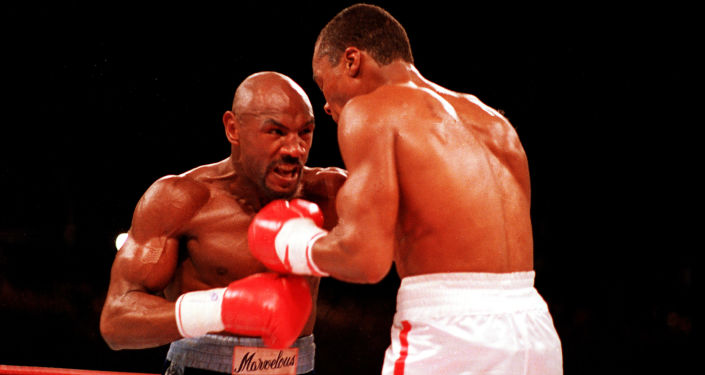 The funeral of US boxing legend Marvelous Marvin Hagler is expected to take place later this month, after he died suddenly on Saturday, aged 66.

But it looks unlikely that any of his three great adversaries in the ring will be invited to the ceremony.

Terrible news about Marvin Hagler. My uncle made me watch all of his classic bouts with Duran, Hearns and Leonard when I was very young. There is an amazing book written about that cluster of talent called “Four Kings”, I’d highly recommend it. Huge loss. A legend.

​Between 1980 and 1987 four names dominated the sport’s middleweight division – Hagler, Sugar Ray Leonard, Tommy Hearns and Roberto Duran – and they were dubbed the Four Kings.

In his book, The Four Kings, George Kimball wrote that it was “fortuitous coincidence” that Hagler, Leonard, Hearns and Duran all “matured into greatness” at the same time.

​”Each of the nine bouts between the four men was memorable in its own way and at least two of them…are commonly included on any list of the greatest fights of all time,” added Kimball.

One of those fights was the legendary clash between Hagler and Hearns in Las Vegas in 1985.

Boxing promoter Bob Arum had arranged for the pair to go on a 23-city publicity tour to whip up pay-per-view sales and he said Hagler and Hearns ended up hating each other.

“They had gotten on each other’s nerves so much they didn’t want to do a boxing match. They wanted to kill each other,” Arum recalled.

The first round of Hagler-Hearns is often cited as the greatest three minutes of boxing in history.

Hagler stopped Hearns in the third round and the Detroit fighter, known as The Hitman, told AP on Saturday: “I can’t take anything away from him. He fought his heart out and we put on a great show for all time.”

Hearns triggered confusion at the weekend when, hours before Hagler’s death was announced, he posted a picture of his old foe on Instagram and wrote: “ A real true warrior Pray for the king and his family…he’s in ICU fighting the after effects of the vaccine! He’ll be just fine but we could use the positive energy and Prayer for his Full Recovery !”

Hagler’s wife Kay said he died of natural causes at home, seeming to shoot down speculation that the fighter had died from vaccine-related complications.

So Hearns will not be getting an invite to the funeral.

Marvellous Marvin Hagler. Overcame the racism of the riot to win the title in UK, battered Sibson then gave us the classics with Leonard and Duran. One of my all time favourites.

​In the run-up to their 1983 fight Hagler said: “Duran is a dirty fighter and he’s gonna get more dirty when he finds himself in trouble. He’ll try to do anything he can to win.”

Hagler won on points and would retire four years later while the Panamanian fought on until 2001, when he lost against Hector “Macho” Camacho.

Duran and Hagler had little in common and had not stayed in touch, partly because the man known as “The Hands of Stone” does not speak much English.

Hagler beat Hearns and Duran but his only loss among the Four Kings was a controversial 1987 split decision points loss to Leonard.

The greatest 3 minutes in #boxing history.

As fitting a tribute as any to one of the sport’s all-time finest. pic.twitter.com/xxRgSdGZsw

​Hagler, and most of those watching, thought he won the fight and he was so furious at the judges that he quit the sport, later becoming an actor in Italy.

Hagler never forgave Leonard, who he expected would admit that he really had not won the fight, and the pair never patched up their differences.

It is telling that while Sugar Ray Leonard wished Tiger Woods all the best for his recovery on Twitter after the golfer’s car crash, he has made no comment about Hagler’s demise.

In a BBC boxing podcast in May 2020 Leonard said he still hoped for a Four Kings reunion: “I love Roberto. I love Tommy. I love Marvin. And I want to go on the road with these guys, all over the world, and talk about how we felt.”

Still hard to fathom that Marvin Hagler is no longer alive. I thought he would be around for years. He seemed to be in great condition. 50 mile bike trips at 66 years old. Roberto Duran gonna outlive us all.

​He said Hearns and Duran were on board with the idea but Hagler was holding out.

“I’m trying to convince Marvin. I’m not giving up. I’m an optimist by nature,” said Leonard.

Hagler’s funeral is likely to be a quiet affair near his home in New Hampshire.

But his place among the Four Kings will never be forgotten.

EU-Turkey Migrant Deal: Will Turkey Continue to be a ‘Waiting Room’ for Refugees?