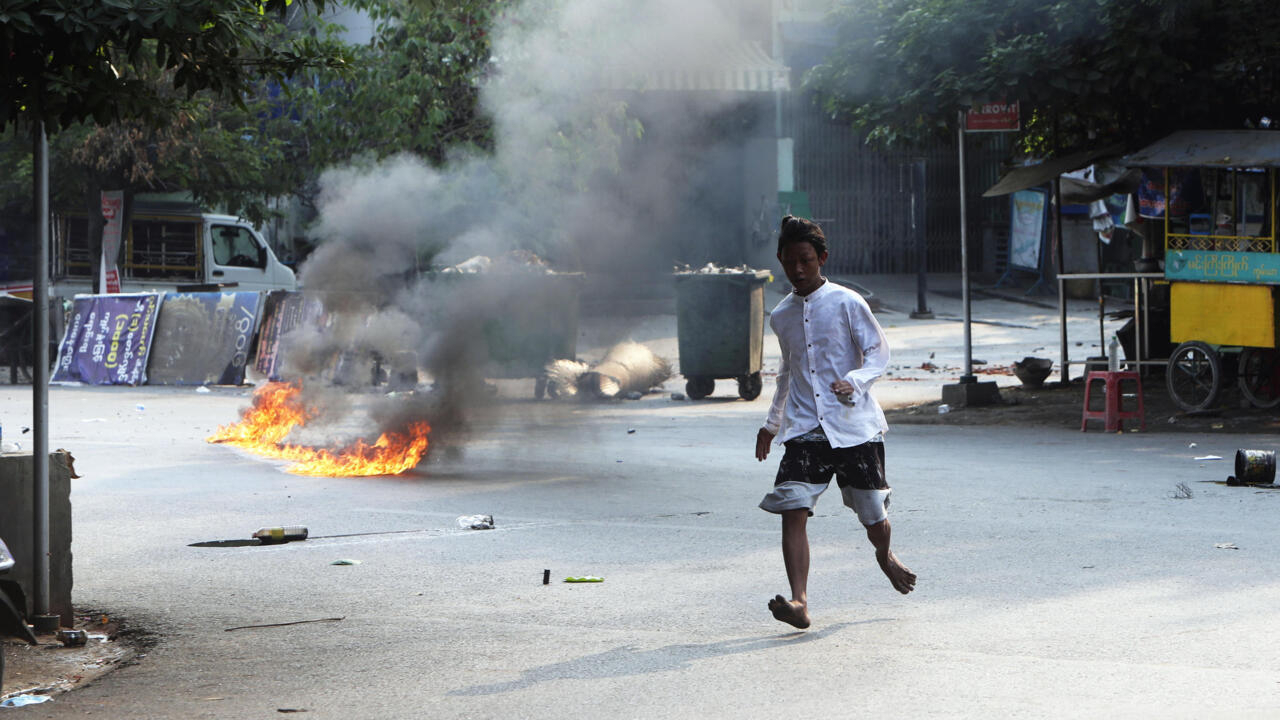 Two of the victims were killed in Yangon, the country’s largest city. One of them was shot in the head and another was shot in the abdomen, according to local media covering the demonstrations in Hlaing Thar Yar Township.

A third person died in the northern city of Hpakant when police fired into a crowd of demonstrators, local media reported. A fourth victim, a woman, died after being shot in the head in Mandalay, the country’s second-largest city, as security forces were conducting clearance operations.

In Yangon, video posted on social media showed crowds of people, some wearing hard hats and gas masks, running down a street amid sounds of gunfire. The demonstrators quickly sprayed vapor from fire extinguishers as they retreated.

The use of fire extinguishers — common now in protests across Myanmar — is intended to smother tear gas and also create a vapor screen that makes it harder for police to pursue or shoot demonstrators.

There were also reports of injuries from live rounds and rubber bullets in other parts of Yangon, including Insein district, where billows of black smoke could be seen after security forces reportedly set roadblocks on fire.

On Saturday, the civilian leader of Myanmar’s government in hiding vowed to continue supporting a “revolution” to oust the military leaders who seized power in the February 1 coup. Mahn Win Khaing Than, who was named the acting vice president by Myanmar’s ousted lawmakers and is a member of deposed leader Aung San Suu Kyi’s political party, addressed the public for the first time since the coup.

“This is the darkest moment of the nation and the moment that the dawn is close,” he said in a video posted on the shadow government’s website and social media.

“In order to form a federal democracy, which all ethnic brothers who have been suffering various kinds of oppressions from the dictatorship for decades really desired, this revolution is the chance for us to put our efforts together,” he said.

He added: “We will never give up to an unjust military, but we will carve our future together with our united power. Our mission must be accomplished.”

At the end of the message, he flashed the three-finger salute that has become a symbol of resistance to the military rulers.

Also Saturday, security forces again opened fire on demonstrators, killing four in Mandalay, two in Pyay in south-central Myanmar, and one in Twante, a suburb of Yangon. Details of all seven deaths were posted on multiple social media accounts, with some accompanied by photos of the victims.

The actual death toll is likely to be higher, as police apparently seized some bodies, and some of the victims suffered serious gunshot wounds that doctors and nurses working at makeshift clinics would be hard-pressed to treat. Many hospitals are occupied by security forces, and as a result are boycotted by medical personnel and shunned by protesters.

The independent UN human rights expert for Myanmar, Tom Andrews, said last week that credible reports indicated that at least 70 people had died so far, and cited growing evidence of crimes against humanity by the military.

Other unofficial but carefully compiled tallies put the number of deaths since the coup at around 90.

Saturday’s killings did not faze demonstrators in Yangon who crowded a downtown commercial area past the official 8 pm curfew to hold a mass candlelight vigil and sing about their cause. The mostly young protesters rallied at an intersection where they usually gather for daytime protests.

After-dark rallies were also held in Mandalay and elsewhere.

The nighttime protests may reflect a more aggressive approach to self-defense that has been advocated by some protesters. Police have been aggressively patrolling residential neighborhoods at night, firing into the air and setting off stun grenades as part of intimidation.

They have also been carrying out targeted raids, taking people from their homes with minimal resistance. In at least two known cases, the detainees died in custody within hours of being hauled away.

It said that according to reports, several people were injured but the identities of arsonists had not yet been ascertained.

“China urges Myanmar to take further effective measures to stop all acts of violence, punish the perpetrators in accordance with the law and ensure the safety of life and property of Chinese companies and personnel in Myanmar,” CGTN said, quoting a Chinese embassy statement.

(FRANCE 24 with AP and REUTERS)

Saudi prince sidelined as US prepares to publish Khashoggi report