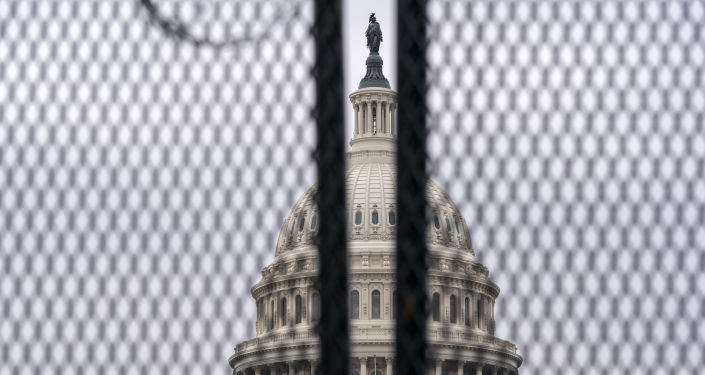 Protesters believe that the fence restricts access to open spaces and important roads through the city, according to The Hill newspaper.

The organisers urged citizens to bring dogs, picnic blankets, and snacks to show how they use the part of the city blocked by fences.

“Bring your dogs, your kids, your bike, a picnic blanket with snacks, sidewalk chalk, bubbles, balls, or whatever else you want to show how you use the part of our city currently blocked off by barbed wire,” the protest’s announcement said.

Protestors call for fence around the Capitol to come down. “Now what you see is the overdoing of protecting the capital.”-Delegate Eleanor Holmes Norton. The measures she says should be taken instead. Tonight on @ABC7News at 11. pic.twitter.com/lESpNBkqaz

​“The four miles of barbed wire fence around the Capitol complex have cut off our access to open spaces and essential roads through the city,” the protest organisers said. “These are areas where we play, relax, walk our dogs, enjoy the flowers, commute to work, and connect with friends. The roads are also critical routes for emergency personnel to reach us and keep us safe.”

​Earlier, Senate Minority Leader Mitch McConnell expressed confidence that the security measures in the Capitol are redundant and compared Washington to the capital of Afghanistan.

Two-meter-high metal fences were installed around the perimeter of the Capitol after 6 January, when supporters of former US President Donald Trump broke into Congress and tried to prevent the approval of the presidential election results.

The Trump supporters clashed with police and the incident resulted in five deaths, including that of a Capitol police officer and an Air Force veteran who was shot dead by police.

After the incident, the authorities deployed some 6,500 National Guard troops to aid the police federal law enforcement agencies in guarding the Capitol.

Iran Hopes to Get 60% Uranium Next Week, Envoy in Vienna Says