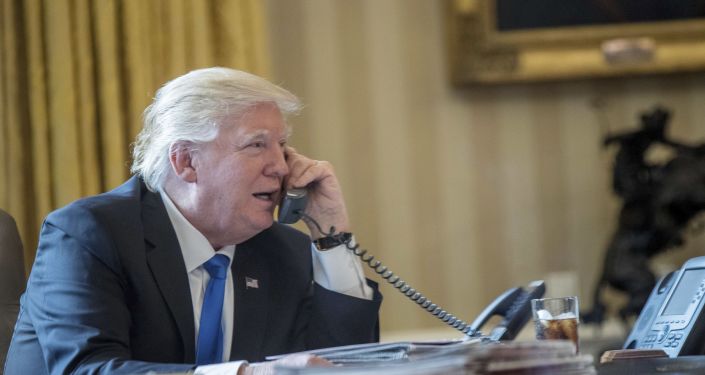 Then-President Donald Trump placed a telephone call with the lead elections investigator of the office of Georgia’s Secretary of State in late December, urging to ‘look for fraud’ during an audit of mail-in ballots in Fulton County, reported The Wall Street Journal.

“Something bad happened,” Trump had ostensibly said in the newly published audio recording of the six-minute call to Frances Watson, as he reiterated claims he had won Georgia.

“When the right answer comes out, you’ll be praised… People will say, great, because that’s — that’s what it’s about, that ability to check it, and to make it right because everyone knows it’s wrong,” the-then POTUS had allegedly insisted, with Georgia Secretary of State Brad Raffensperger’s lead investigator responding:

“I can assure you that our team and the [Georgia Bureau of Investigation], that we are only interested in the truth and finding the information that is based on the facts.”

The leaked call that allegedly took place during the ongoing signature match audit in Georgia was earlier reported by The Washington Post in January.

Donald Trump’s Democratic rival in the 2020 election, Joe Biden, won Georgia by about 12,000 votes out of 5 million cast.

Amid Trump’s continued accusations of the election having been ‘stolen’ from him, Secretary of State Brad Raffensperger had launched an inquiry following allegations that Cobb election officials had improperly accepted mail-in ballots with signatures that failed to match those on file.

After the recounts, a forensic audit of about 15,000 mail-in ballots in Cobb County was carried out, involving checking of signatures on ballot envelopes.

It was during that audit, which subsequently found no evidence of fraud, that Trump had placed a call with Frances Watson.

In the published audio recording of the call, Donald Trump said he contacted Georgia’s lead elections investigator at the request of Mark Meadows, his chief of staff.

During the call, Trump had underscored the importance of the job carried out by Watson at the time, supposedly pressuring her investigators to not only focus on Cobb County, but also Fulton – the state’s most populous county, according to the outlet.

“If you can get to Fulton, you are going to find things that are going to be unbelievable,” Trump reportedly said, without providing specific evidence of ‘rigging’.

In the recording, Watson, voiced surprise that Trump was calling her.

“I do know that you are a very busy, very important man and I am very honored that you called… And quite frankly I’m shocked that you would take time to do that, but I am very appreciative.”

There has not been any official comment from Frances Watson through the Georgia Secretary of State’s office on the report.

Brad Raffensperger’s spokesman Ari Schaffer was quoted as saying to the outlet:

“This phone call is just one more example of how Secretary Raffensperger’s office’s public comments also reflect what was said in one-on-one conversations: We would follow the law, count every legal vote and investigate any allegations of fraud. That’s exactly what we did, and how we arrived at the accurate final vote tally.”

Prosecutors in the US state of Georgia earlier launched a criminal investigation into whether former President Donald Trump had attempted to overturn the state election results, centring on the 2 January hour-long telephone conversation between Donald Trump and Georgia Secretary of State Brad Raffensperger.

According to a leaked recording of the phone call, published by The Washington Post on 4 January, Trump pressured Georgia’s Secretary of State Brad Raffensperger and General Counsel Ryan Germany to overturn then-President-elect Joe Biden’s election victory in the state.

“I just want to find 11,780 votes, which is one more than we have. Because we won the state,” Trump was heard saying in the leaked call.

“The people of Georgia are angry, the people in the country are angry,” Trump said at another point, adding:
“And there’s nothing wrong with saying, you know, um, that you’ve recalculated.”

“Well, Mr. President, the challenge that you have is, the data you have is wrong.”

Fulton County District Attorney Fani Willis sent letters to state officials, including Secretary of State Brad Raffensperger and Governor Brian Kemp, to notify them of the probe, while urging to preserve “all records potentially related to the administration” of the state’s Nov. 3 election, reported Reuters.

The investigation includes “potential violations of Georgia law prohibiting the solicitation of election fraud, the making of false statements to state and local government bodies, conspiracy, racketeering, violation of oath of office and any involvement in violence or threats related to the election’s administration,” stated Willis said in the letters, dated 10 February, and cited by the outlet.

Willis said a grand jury would convene this month.

Jason Miller, a senior Donald Trump adviser, slammed the Democrats for attempting “to score political points by continuing their ‘witch hunt‘ against President Trump,” adding “everybody sees through it.”