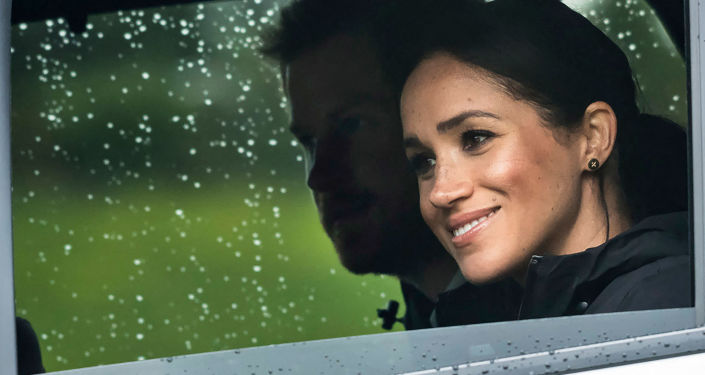 The Royal Family has been blamed of “double standards” for announcing a probe into bullying claims against Meghan Markle.

Questioning why Buckingham Palace had ordered an investigation into the Duchess of Sussex while failing to take similar action in the scandal surrounding Prince Andrew, Carolyn Durant, co-author of Finding Freedom: Harry and Meghan and the Making of a Modern Royal Family was quoted by Sky News as saying:

Referring to the scandal around the Queen’s son, the Duke of York, who has become a royal pariah since his ‘car crash’ BBC interview in connection with the Jeffrey Epstein sex scandal, the co-author continued:

“Why hasn’t he been urged to cooperate with US authorities? Why were Prince Harry’s military honours stripped [after he stepped down as a working royal] but Prince Andrew’s haven’t been?”

© AP Photo / Chris Ison
n this Sept. 2, 2000 file photo, British socialite Ghislaine Maxwell, driven by Britain’s Prince Andrew leaves the wedding of a former girlfriend of the prince, Aurelia Cecil, at the Parish Church of St Michael in Compton Chamberlayne near Salisbury, England. The FBI said Thursday July 2, 2020, Ghislaine Maxwell, who was accused by many women of helping procure underage sex partners for Jeffrey Epstein, has been arrested in New Hampshire.

One of convicted sex felon Jeffrey Epstein’s alleged victims Virginia Giuffre (nee Roberts) claimed that she was trafficked to London by the late billionaire and his alleged accomplice Ghislaine Maxwell, where she was forced to have sex with Prince Andrew on at least three occasions, including when she was just 17 years old.

Buckingham Palace and Prince Andrew have been denying the accusations. While the disgraced royal previously voiced a readiness to help prosecutors working on the late Jeffrey Epstein case, investigators claimed that in actual fact the Duke of York had provided zero cooperation.

Carolyn Durant underscored that the current developments echoed revelations made previously by Meghan Markle herself, who had “really struggled with” “double standards”, and “her friends were concerned about her”.

Buckingham Palace announced on 3 March that it would investigate allegations that Meghan Markle bullied several staff members after a report in The Times on Tuesday cited unnamed royal aides as saying a complaint had been made against her in 2018.

According to sources, two personal assistants had been ‘driven out’ from the Kensington Palace household by the Duchess of Sussex’s treatment of them, while forcing others to ‘break down in tears’.

The report said the sources believed the public “should have insight into their side of the story” ahead of the royal couple’s interview with Oprah Winfrey.

Buckingham Palace said it was “very concerned” about the allegations outlined in the report, adding:

“Accordingly our HR team will look into the circumstances outlined in the article. Members of staff involved at the time, including those who have left the Household, will be invited to participate to see if lessons can be learned.”

It was added that the Royal Household had a ‘Dignity at Work’ policy in place, and would not tolerate ‘bullying or harassment in the workplace.’

Prince Harry and Meghan Markle have responded by saying they are the victims of a calculated ‘smear campaign’, with their lawyer dismissing claims against the Duchess of Sussex as based on “misleading and harmful misinformation”.

Tensions recently flared after Prince Harry and Meghan Markle were revealed to have given a tell-all interview to Oprah Winfrey, where in short clips released by CBS ahead of the airing on 7 March The Duchess of Sussex says she could not be expected to “just be silent” if the Royal Family is playing an “active role” in “perpetuating falsehoods” about her.

The bombshell sit-down interview would be perceived as going against the Windsors’ motto of “never complain, never explain”.

​Prince Harry also talks in the interview about his fears of “history repeating itself”, in a seeming reference to how his mother, the late Princess Diana, was treated by the press and the Royal Family.

​The Duke and Duchess of Sussex stepped down as senior royals to become financially independent and pursue a new life in the US in March last year. They have since also handed over all their royal patronages, confirming they had no intention of returning to the royal fold.

Merkel Says She Criticises Putin to His Face, Not Behind His Back After Biden’s ‘Killer’ Jab