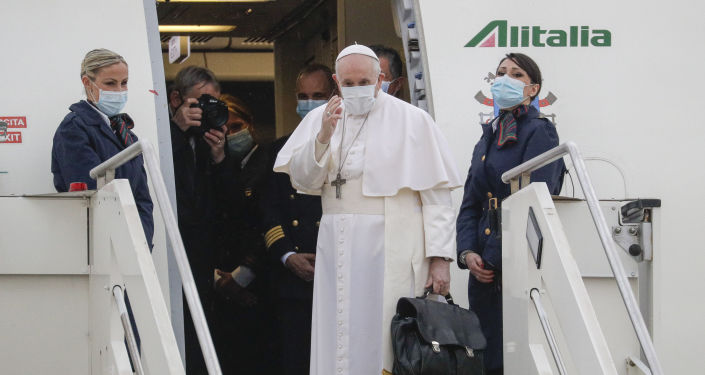 Sputnik comes live from Baghdad’s International Airport where Pope Francis is arriving on Friday, 5 March, for a historic visit.

The pontiff will be welcomed in a ceremony at the Presidential Palace and will later meet Iraqi President Barham Salih and heads of local Christian communities.

The Pope’s schedule also includes a meeting with civil authorities and members of the Diplomatic Corps. He is expected to visit Najaf to meet Shia Grand Ayatollah Sayyid Ali Al-Husayni Al-Sistani, and Mosul, where he will pray in Hosh al-Bieaa for the comfort of the souls of war victims.

The Pope will also visit the Church of the Immaculate Conception in Qaraqosh where he will recite the Angelus with believers. After that, he will return to Erbil to celebrate the Holy Mass at Franso Hariri stadium and will also visit the ancient city of Ur, the birthplace of the biblical patriarch Abraham, as well as the plains of Nineveh, whose residents witnessed atrocities committed by Daesh* terrorists.

*Daesh (also known as IS/ISIS/ISIL/Islamic State) is a terrorist group banned in Russia.