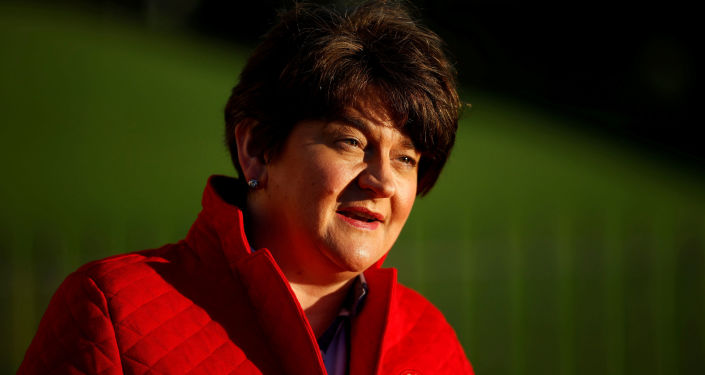 The first minister of Northern Ireland accused the European Union on Friday of putting the protection of the bloc above the Belfast peace agreement, referring to the EU’s threat of legal action if the UK unilaterally extends the trading grace period.

“What they’re only interested in is protecting their bloc. They’re not interested, as they claim to be, in protecting the Belfast agreement,” Arlene Foster said while speaking on BBC radio.

“If they were, they would not be taking the action that they’re taking a present.”

Foster said that the protocol, which is included in the UK’s trade deal with the EU, was introduced to prevent British goods entering the bloc’s single market, but described its impact, including the recent behaviour of London and Brussels, as “totally disproportionate” to the danger.

She called for the protocol “to be replaced because certainly extending grace periods are only sticking plasters to what are really fundamental problems in terms of trade,” adding: “There is a fundamental misunderstanding with the European Union as to the that they are doing.”.

On Wednesday, Brussels said it would respond with legal action if the British government were unilaterally to extend the current grace period for checks on food imports to Northern Ireland. This followed suggestions by UK ministers to continue not fully applying procedures and checks on goods moving between Britain and the Single Market.

© REUTERS / CLODAGH KILCOYNE
A sign is seen with a message against the Brexit border checks in relation to the Northern Ireland protocol at the harbour in Larne, Northern Ireland February 12, 2021

Although the UK initially tried to see this arrangement extend to 2023, Brussels rejected the suggestion. The first grace period is set to expire at the end of March, but Westminster has pledged to continue operating in accordance with the current rules until October

However, European Commission Vice President Maroš Šefčovič described the move as “a violation of the relevant substantive provisions” within the Northern Ireland Protocol, which prevents putting up a hard customs border in Ireland.

Since the EU issued its threat, Northern Irish loyalist paramilitary groups responded by temporarily withdrawing support for the 1998 Good Friday Agreement, as the Brexit deal in effect creates a customs border between Northern Ireland and the Republic of Ireland.

Kobe Bryant Inducted into Hall of Fame by Michael Jordan

‘Quite a Few Negative Reactions to That’: Elon Musk Debates Second Shot of COVID Vaccine