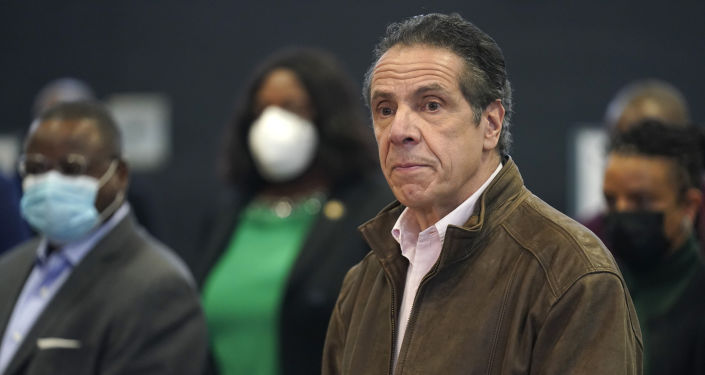 Andrew Cuomo’s former aide Charlotte Bennett, who is accusing the New York Governor of sexual harassment, says she was left “terrified” by her exchanges with the politician last year, after he repeatedly asked her about her experience being raped and whether she was “sensitive to intimacy” now.

“I thought, he’s trying to sleep with me,” Bennett told CBS’ Norah O’Donnell in her first televised interview since going public with her allegations against the Democratic politician.

“The governor’s trying to sleep with me and I’m deeply uncomfortable and I have to get out of this room as soon as possible,” Cuomo’s former health policy advisor added.

According to Bennett, she didn’t feel like she “had a choice” to stop her interaction with Cuomo at that point.

“He is my boss. He is everyone’s boss,” she said, after nearly breaking into tears during the interview.

Charlotte Bennett, a former staff member for New York Governor Cuomo, details what she says was clear sexual harassment by the governor.

​The woman says that Cuomo, who is now 63, asked if age difference mattered to her, as he apparently “was fine with anyone over 22”.

“Without explicitly saying it, he implied to me that I was old enough for him and he was lonely,” the ex-aide claimed, saying that their conversation was off the record.

Bennett was the second woman who came forward with sexual harassment accusations against the New York governor. The first one, Cuomo’s former aide Lindsey Boylan, claimed in December that the politician had harassed her “for years”, including forcibly kissing her on the lips after a one-on-one meeting.

The governor denies the claims of both women. He said in a Sunday statement that his behaviour was “misinterpreted” as “unwanted flirtation”.

But Bennett argues that there was nothing she could have possibly “misinterpreted” about Cuomo’s sexual advances.

“I understood him loud and clear. It just didn’t go the way he planned,” the woman says.

According to Bennett, the governor “felt like he was untouchable in a lot of ways”.

Cuomo issued a televised apology for his “embarrassing” behaviour on Wednesday – shortly after another woman accused him of inappropriately touching and harassing her at a wedding reception in September 2019.

“I now understand that I acted in a way that made people feel uncomfortable. It was unintentional and I truly and deeply apologise for it. I feel awful about it and, frankly, I am embarrassed. And that’s not easy to say,” Cuomo muttered.

He said that he was not going to resign from his post following a trove of sexual misconduct claims.

New York Attorney General Letitia James announced this week that she had received a formal request to probe the sexual assault allegations. James is also the one who had released a report in January detailing how Cuomo’s administration had failed to report thousands of nursing homes deaths in the state, potentially undercounting them by as much as 50%.

Cuomo has signalled his intention to cooperate with the sexual assault probe and called on the public not to jump to conclusions about his behaviour and rather “wait for the facts”.