100th Day of Protest: Indian Farmers to Block Western Expressway on Saturday, Ahead of Bicycle Rally 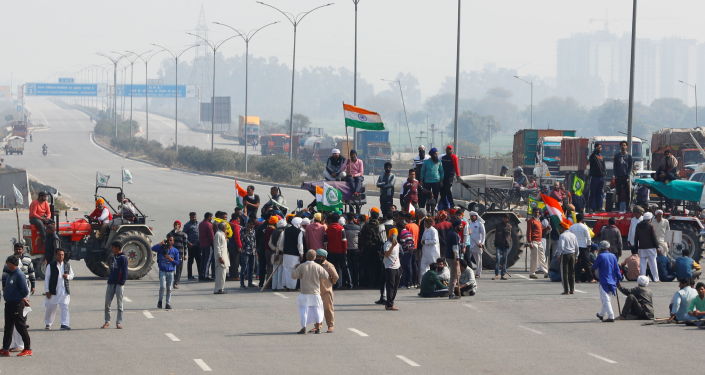 From blocking expressways to launching a bicycle rally, farmers protesting against the Narendra Modi-led central government’s new farm laws have planned a series of events in March.

Samyukt Kisan Morcha (SKM), an umbrella organisation of farmers’ unions protesting on the border of the Indian capital Delhi, has stated that they would block the Western Peripheral Expressway on 6 March. This expressway connects the Indian states of Haryana and Uttar Pradesh and is close to Delhi.

According to the plans, the expressway will be blocked for five hours, from 11 a.m. to 4 p.m. (local time), as their agitation would be entering its 100th day. Throughout the rest of the country, supporters will hoist black flags above their homes and offices to show support for the movement.

The events will take place almost one-and-a-half months after Delhi witnessed a major farmers’ protest, the ‘Tractor Rally’, on 26 January in which nearly 400 policemen were injured and one farmer died.

“The agitation will mark the completion of 100 days. This could not have been possible without the support of women farmers. On Women’s Day, we will see greater participation from women who will spearhead the protests for the day. Women will address the gatherings and mobilise support for the agitation,” Sanjay Madhav, a Samyukt Kisan Morcha (SKM) member, told reporters.

To intensify the protest, farmers have also planned to mobilise the people against the farm laws. This bicycle rally will cover 8,308 km, from Kanyakumari to Kashmir. It will start on 12 March.

Speaking to Sputnik on the need for protest, Harinder Singh, a member of SKM, said the aim of the planned event was “to spread awareness about our protest across the country”, adding that they chose bikes over tractors because of skyrocketing fuel prices.

He also said that apart from farmers, many people have shown an interest in being part of it, including students, retired servicemen, and even the elderly, all with an agriculture background. And, those who cannot ride a bicycle will join the protest from their respective locations.

Protesting farmers mostly from the northern Indian states Haryana, Uttar Pradesh, Rajasthan and Punjab are demanding to scrap the three laws passed by the federal government in September 2020.

The two new farm bills and one amendment act that stirred this controversy are- the Farmers (Empowerment and Protection) Agreement of Price Assurance and Farm Services Act, 2020; Farmers Produce Trade and Commerce (Promotion and Facilitation) Act, 2020 and The Essential Commodities (Amendment) Act 2020. They were passed during the monsoon session of the Parliament in September of last year.

The farmers believe that the new laws, which replace fixed prices in the agricultural sector with a market-driven system, will pave the way for the minimum support price system (MSP) to be dismantled, leaving them at the mercy of big agribusiness.