We break down Amazon’s Echo lineup: Which one is right for you

Amazon’s Echo lineup, which spurred the smart speaker category into existence, is full of devices that come in different shapes and sizes. Some of them even have giant screens that follow you around the room.

So, how do you know which one is right for you? It’s a tough question, but one we feel qualified to answer. Below you’ll find all of the Echo devices that Amazon currently sells, with a breakdown of its features and capabilities.

One fact is clear to use, there’s an Echo for everyone (who wants one). 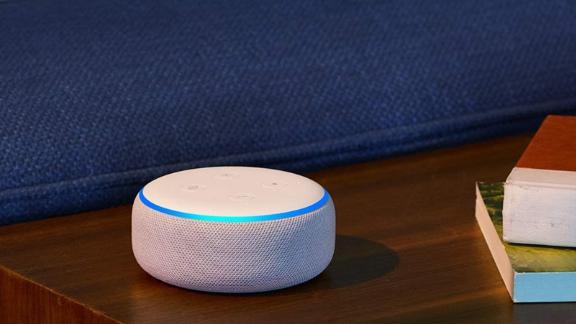 Amazon’s Echo Dot lineup is where you’ll find the smallest, but most affordable smart speaker offerings from the tech giant. The third-generation Echo Dot looks more like a hockey puck than a speaker. But don’t be fooled, the Dot is a capable Alexa device that’s small enough to put on nearly any surface, be it a nightstand next to your bed or a corner of your kitchen counter. There’s an LED ring that goes around the top of the Dot, letting you know when Alexa is listening to you. Additionally, you can turn off the microphone using one of the four buttons on the top of the Dot.

You’ll be able to ask Alexa questions like the local weather report, control your smart home gadgets or even use it to stream music. It’s not big or loud enough to fill a large room, but does a fantastic job in a smaller area like a bathroom. There’s a 3.5mm audio jack on the back of the Dot, which allows you to connect a standard, and perhaps more powerful, speaker to your Dot. You can get the third-generation Echo Dot in charcoal, gray, plum or sandstone for $39.99. 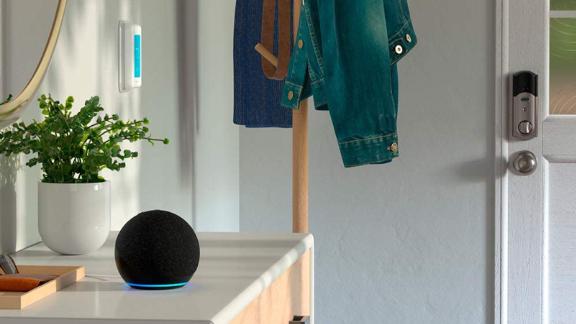 The fourth-generation Echo Dot has a brand new design, and a slightly bigger price than the previous generation Dot. CNN Underscored recently named it the best budget pick for a smart speaker in 2021. Instead of a hockey puck, Amazon designed a new Echo experience that looks more like a softball. The sphere-like design has a cloth covering that takes up most of the visible area, giving the Dot a refined look that will blend in with your home or apartment’s furniture. Because it’s part of the Dot lineup, it’s still relatively small, lending it to being placed nearly anywhere.

However, it is bigger than the third-generation Echo Dot. It measures 3.9-inches wide, by 3.5-inches tall. On the top is an action button, volume controls and a button that disables the microphone for those times when you want to have complete privacy. The base of the new Echo Dot has Alexa’s standard light-up ring that turns blue when you’re talking to the personal assistant. Even though it has the same size of speaker as the previous Echo Dot, we found this version to offer louder and more robust sound. It’s still not enough for a large living room, but it should be fine for a bedroom or even the kitchen. The $49.99 fourth-generation Echo Dot comes in three colors: charcoal, white, or twilight blue. 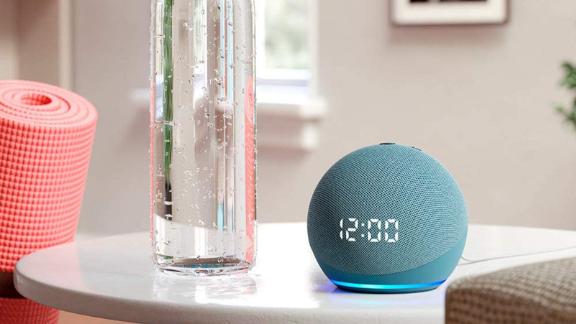 Need a new alarm clock? Then check out the Echo Dot with a clock. It uses the same design as the fourth-generation Echo Dot, but instead of a plain cover, there’s a functioning LED clock built into the housing. That means you’ll no longer have to ask Alexa what time it is, you can just glance at the Dot. You’ll get all of the same features as the standard Echo Dot such as interacting with Alexa, getting news updates, listening to music or controlling lights in your home. The Dot with clock only comes in two colors: white and twilight blue. 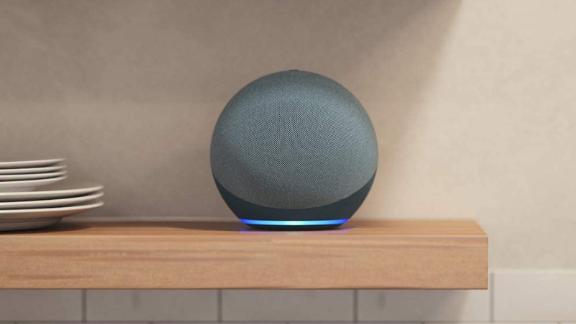 Amazon’s flagship Echo device is so good it earned top honors as our best overall pick for a smart speaker in 2021. It shares the same design as the latest Echo Dot, complete with a light up ring along the bottom of the globe. In fact, we’d say the ring makes it look as if the Echo is almost floating. Instead of a single speaker like the Echo Dot, the standard Echo has two tweeters and a woofer, which provide richer, clearer sound, regardless of the volume level. It’s enough to fill almost any room in your home, so don’t be afraid to turn it up and jam. One reason it sounds so much better is due to some pretty cool tech that helps the Echo detect how close it is to other objects, like a wall, and it will auto-adjust the sound on the fly.

Going beyond simply being a pathway to talk to your smart home gadgets, the Echo also includes Zigbee and Amazon Sidewalk connection protocols, turning it into a smart home hub that connects directly to compatible devices like smart bulbs or plugs. The Echo comes in charcoal, white, PRODUCT(RED) and twilight blue for $99.99. 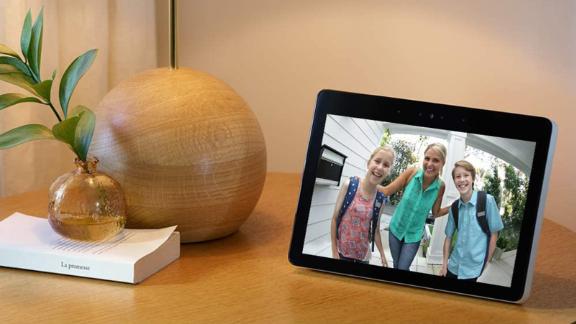 Smart displays like the Echo Show have all of the same features that Amazon’s smart speakers offer, with the added bonus of a screen that can show you the weather forecast, recipes or stream your favorite Amazon Prime Video shows and movies without the need for a TV. Heck, you can even use the screen to play games with Alexa. And lest we forget, Amazon’s Show lineup has a built-in camera so you can place video calls with other Show users or using Skype.

The second-generation show has a 10.1-inch high-definition display, doubles as a smart home hub with Zigbee connectivity built in. If you use any Alexa compatible smart cameras, like an Amazon-owned Ring video doorbell, you can watch a livestream of your camera feed directly on the Echo Show, which looks great on the big, vibrant display. On top of the housing is where you’ll find the volume controls, along with a button to turn off the microphone. The back is covered in cloth, giving it an aesthetic look that blends into your home environment. You will pay a premium though at $229.99. 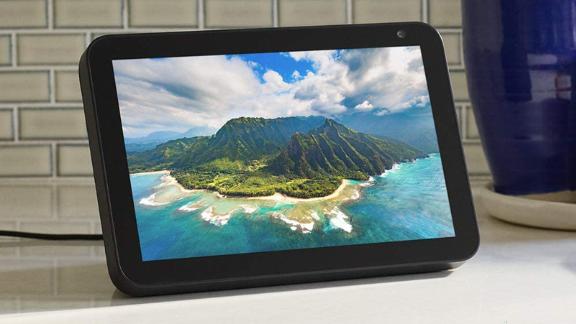 The Echo Show 8 packs in all of the same features as the second-generation Echo Show, but in a slightly smaller footprint. There’s a 1-megapixel camera above the display to capture your end of the call, while an 8-inch display makes your video calls through Zoom or Skype look great. A 3.5mm audio jack on the back of the display gives you the option to connect it to a bigger speaker that you can control via the display. It has four built-in mics that make it easy to pick up your voice from across the room, even when you’re playing your favorite song at high volume. There’s a physical switch in the top-right corner that will turn off the microphone and disable the camera when you want complete privacy.

The Echo Show 8 is great for those who want to save some space on their counters, but want an Alexa-integrated smart display that allows them to control their home, view their daily agenda or follow recipe instructions, complete with video guides, while in the kitchen. 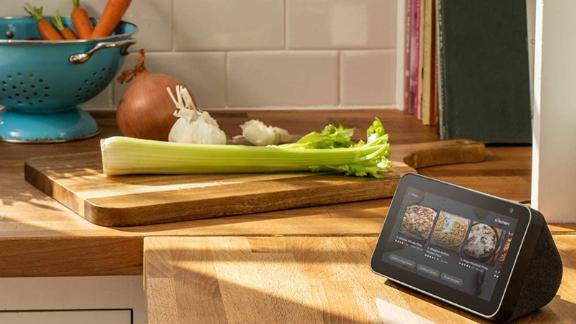 Getting even smaller, the Echo Show 5 is the most affordable Echo Show from Amazon at $89.99. With a screen size of, you guessed it, 5.5-inches, it’s small enough to fit in nearly any corner of your home or on your nightstand, where it would double as a very smart and modern alarm clock. Despite the display being nearly half the size of the original Show, Amazon still included a front-facing camera and video call capabilities in the Show 5. It’s still just a 1-megapixel camera, but it’s good enough for quick chats with friends or family members. The display isn’t high-definition, so if you’re a stickler for clearer resolutions, then you’ll want to start your smart display search with the Echo Show 8. As with the rest of the Show lineup, there’s a 3.5mm audio jack, a physical switch to disable the microphone and camera, and you get full access to Alexa’s complete catalogue of skills. The Echo Show 5 comes in charcoal or sandstone. 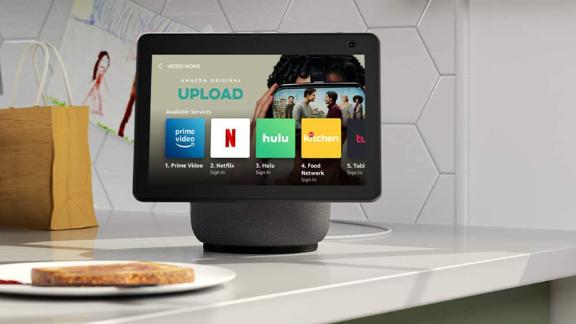 The newest member to the Echo Show family is the Echo Show 10. It’s unlike any other Echo Show we’ve seen before, in that instead of a stationary display, the Show 10’s screen actually follows you around the room during a video call with the 13-megapixel camera or while you watch a show. CNN Underscored reviewed the Show 10 and found that it not only moves around to keep you in frame during a call, but it will move with you as you walk across the room — creepy, but oh so cool.

The design is a mix of previous Echo Show models, combined with the new Echo design. That is, it’s a display that sits atop a spherical base. The base rotates as you move around, keeping the screen and the speakers always facing whoever is in the room. That means you can ask to see a video camera feed of your child sleeping and not have to worry about carrying around an extra tablet just to keep an eye on them. Sound quality is great, as well, giving the Echo Show 10 a one-two punch when combined with the clear 10.1-inch display. You can pick up the Echo Show 10 in charcoal or glacier white for $249.99. 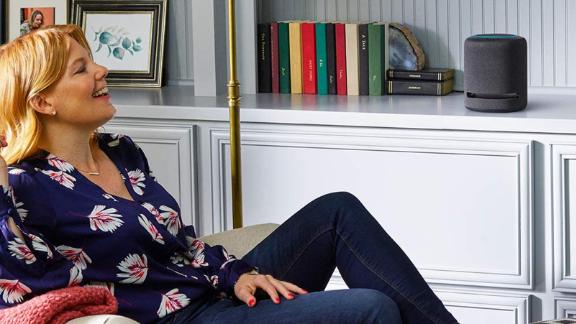 If the Echo speakers leave you wanting more, then Amazon’s Echo Studio is made for you. Is the first and only Amazon speaker that supports HD and 3D audio formats like Dolby Atmos, and it sounds great. The Studio fills any room in your house with sound, and when playing compatible audio files, has a sound stage that flat out plays tricks on your mind. You can hear as the sound moves across your room, even though there’s only a single speaker. On top of great sound quality, the Studio doubles as a smart home hub with Zigbee connectivity, and Alexa built-in. It’s much bigger, comparatively at least, than other Echo devices, so you’ll want to make sure you have a dedicated spot on a shelf or TV stand for it. Speaking of television, you can connect the Studio to a compatible Amazon Fire TV and use it as the output speaker, or pair two Echo Studio’s for even bigger sound. We have experimented in the latter setup, and experienced some audio lag, but you can fine tune the delay to your liking. 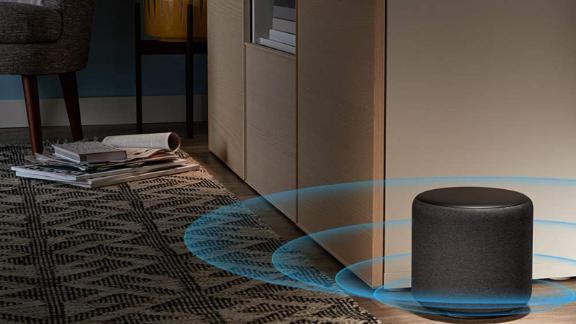 The Echo Sub doesn’t offer any of the Alexa features the rest of Amazon’s Echo line offers. It doesn’t even have a microphone, but instead is meant to act as a subwoofer for any of your Echo devices. It’s primary intent is to connect with the Echo Studio to complete the entire surround sound experience, but don’t let that stop you from picking one up. It will work with the Echo Dot 4th Gen, Echo Dot 3rd Gen, Echo 4th Gen, Echo 3rd Gen, Echo 2nd Gen, Echo Show 10 3rd Gen and Echo Plus 2nd Gen. In short, the Echo Sub is an extra device that will enhance your Echo experience if you’re listening to a lot of music on your Echo(s) and want to enhance the overall experience.

Wolf cuts are this year’s biggest haircut trend. And they might be familiar