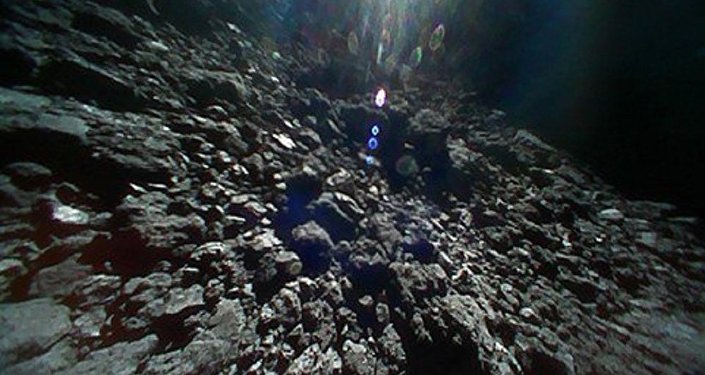 Scientists have discovered water and organic matter on the surface of a tiny asteroid sample, collected from the solar system.

The single grain hails from the celestial rock dubbed ‘Itokawa’ and was retrieved by the Japan Aerospace Exploration Agency’s (Jaxa) first Hayabusa mission in 2010.

​“The Hayabusa mission was a robotic spacecraft developed by the Japan Aerospace Exploration Agency to return samples from a small near-Earth asteroid named Itokawa, for detailed analysis in laboratories on Earth”, Dr Queenie Chan from the Department of Earth Sciences at Royal Holloway, said in a statement.

The asteroid in question is designated a near-Earth object of the Apollo group – a potentially hazardous asteroid.

It was first discovered by the Lincoln Near-Earth Asteroid Research (LINEAR) project in 1998 and later named after Japanese rocket engineer Hideo Itokawa.

​According to researchers from Royal Holloway, University of London, their studies show that the asteroid – the smallest one ever photographed and visited by a spacecraft – had been evolving for billions of years, incorporating liquid and organic material in a manner similar to planet Earth’s.

The research, entitled “Organic matter and water from asteroid Itokawa” and published in the journal Scientific Reports, offers a glimpse into how the asteroid evolved, enduring extreme heat, dehydration, and shattering, only to use material it picked up on its travels to rehydrate and re-form.

The study also underscored that S-type asteroids, consisting mainly of iron- and magnesium- silicates, and the ones most often frequenting Earth, can contain raw components of life.

The findings on the grain, nicknamed ‘Amazon’, have been hailed as able to rewrite previous studies of the history of life on planet Earth, which focused on carbon-rich C-type asteroids.

The international collaboration of scientists found both primitive (unheated) and processed (heated) organic matter within ten microns (a thousandth of a centimetre) of distance.

The scientist added that the current revelations provide a further insight into the details of an asteroid’s history. Furthermore, they suggest that the celestial rock’s evolution route is strikingly “similar to that of the prebiotic Earth”.

A Japanese space probe carrying the first extensive samples of an asteroid has completed its six-year mission, landing safely in the remote Australian outback. The spacecraft, launched from Japan’s Tanegashima space centre in 2014, took four years to reach the asteroid Ryugu. pic.twitter.com/6K587PFbYa

​Looking ahead, further analysis of the sample in question may set the groundwork for studies of other samples, such as the black grains retrieved by Jaxa’s Hayabusa2 mission from asteroid Ryugu last year.

The successor mission was launched on 3 December 2014 and rendezvoused in space with asteroid Ryugu on 27 June 2018.

The samples recovered from asteroid 162173 Ryugu are already producing interesting results:https://t.co/v1uTx0ZeLb
We find that at some point in the past, the entire asteroid was subjected to over 300°C heat, and this cannot be explained by sunlight on the surface. pic.twitter.com/fQ1MysK373

​The Japan Aerospace Exploration Agency (JAXA) confirmed on 14 December 2020 that a capsule only 38 cm across had brought back for the first time subsurface samples of an asteroid back to Earth.

“The confirmation of sample is a very important milestone for us and for JAXA,” says Yuichi Tsuda, project manager for the mission at JAXA.