One-Party Power Grab? Why Dems are Rushing to Pass the For the People Act Before 2022 Midterms 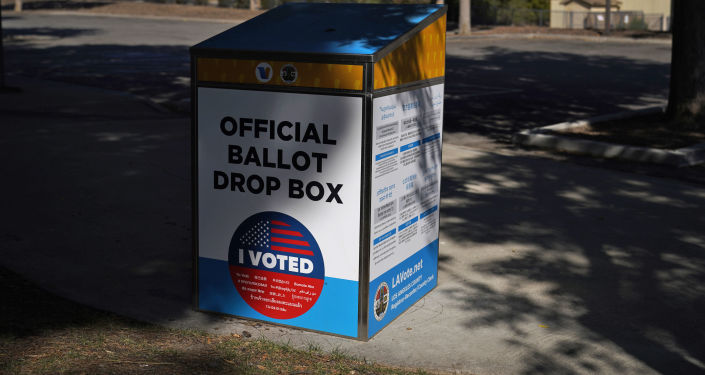 In 2019, the GOP shot the For the People Act down in the US Senate. Having gained a slim majority in both chambers of the US Congress following the 2020 elections, the Democrats reintroduced the legislation in early January. Now the bill is heading to the Senate floor.

“If you thought the 2020 election ran like a finely oiled machine, you’ll love what Democrats plan next,” a Wall Street Journal editorial remarked on 1 March. “In other words, the bill would entrench last year’s emergency experiment, further turning Election Day into Election Quarter.”

Conservatives argue that the bill eliminates voting rules and barriers aimed at preventing potential voter fraud and ensuring election integrity. Thus, the legislation would make voting by mail without “notarisation or witness signature or other formal authentication (other than voter attestation)” a federal practice. If postmarked on time, late-arriving ballots would be considered valid for 10 days after election day. Moreover, states won’t be able to impose a signature verification requirement as a condition of accepting and counting the ballot.

​H.R.1 also appears to be designed to legalise “ballot harvesting” nationwide, allowing Americans to “designate any person” to return a vote with the proviso that the carrier “does not receive any form of compensation based on the number of ballots.” At the same time, states would be prohibited from placing any limits on “how many voted and sealed absentee ballots” the carrier can return. There is the risk, warn the conservatives, that ballot harvesting could expose elderly and vulnerable Americans to coercion and increase the risk that their ballots will be tampered with.

Democrats claim the 2020 election was the safest election on record.

So why are they pushing the more than 800 page H.R. 1 bill to change elections from here on out?

​The bill also authorises the “same-day registration” requiring the state to immediately register a person to vote upon request, even on Election Day. US conservatives argue that by limiting time for verification of voters’ personal information, the provision opens the door to potential voter fraud.

Furthermore, the system of “automatic registration” proposed in the bill would make matters even worse, according to the legislation’s opponents. H.R.1 stipulates that the system would electronically transfer the information necessary for registration from government agencies to state election officials. That means that every person who partakes in certain government programmes would be automatically added to voter registration rolls regardless of whether they’re eligible to vote, elaborates Heritage Action, stressing that the very same bill limits the ability of states to verify and remove ineligible voters from voter rolls.

© AP Photo / Ben Gray
A voter drops their ballot off during early voting, Monday, Oct. 19, 2020, in Athens, Ga. With record turnout expected for this year’s presidential election and fears about exposure to the coronavirus, election officials and advocacy groups have been encouraging people to vote early, either in person or by absentee ballot. (AP Photo/John Bazemore)

Not only does H.R.1 pose a challenge to election integrity, but it’s also creating an unfair competitive advantage for the Democrats, GOP politicians say. “It should be called the Democrat Politician Protection Act,” Mitch McConnell remarked in his January 2019 op-ed for the Washington Post.

If you liked how the 2020 election was run, then you’re going to love Nancy Pelosi’s election bill.

It’s called “H.R. 1,” and it is designed to keep Democrats permanently in power. Here’s how: https://t.co/oeOzqm17oX

​The legislation advocates granting statehood to Washington DC, which would de facto add two Democratic senators and one Democratic representative to the US Congress, solidifying the party’s majority in the legislature.

The bill also deprives state legislatures of their role in drawing congressional districts, replacing them with presumably “independent” commissions. However, in practice, “commissions have turned out mostly to favour Democrats, as in New Jersey and California,” the WSJ wrote in mid-January 2021.

Similarly, GOP politicians are suspicious about the Federal Elections Commission (FEC) being governed by five commissioners instead of six, as proposed in the bill. Presently, the FEC’s board includes three Republicans and three Democrats, which preserves its bipartisan nature. While the Dems suggest that reducing the number to five would axe potential gridlock, their opponents believe that H.R.1 would allow the partisan majority to weaponise the FEC.

On the other hand, the legislation’s provision mandating political non-profits to disclose donors would not increase transparency but would enable “militant Leftists” to “dox conservatives, threaten their families, and pressure employers into firing them,” suggests Heritage Action.

As the Wall Street Journal’s editorial summarised on 14 January 2021, “the bill is designed to auto-enroll likely Democratic voters, enhance Democratic turnout, with no concern for ballot integrity.”

© REUTERS / Brendan McDermid
A Board of Elections employee cleans a voting machine during early voting at the Brooklyn Museum in Brooklyn, New York

While the Democratic Party rejects the allegations, arguing that H.R.1 is aimed at cracking down on corruption and enhancing voting rights for the American people, House Republicans came up with H.R. 322, the Save Democracy Act, in mid-January 2021.

“The goal of the Save Democracy Act is to restore Americans’ confidence in the integrity of our elections. The bill’s common-sense policies will cut down on opportunities for fraud to occur in federal elections while protecting states’ sovereignty in the process,” stated Congressman Steven Palazzo, a member of the Republican Study Committee (RSC) and co-sponsor of the bill.

The reforms included in the Save Democracy Act – from citizenship and voter verification requirements to ballot integrity measures – are essential to restoring Americans’ faith in the fairness of our elections. https://t.co/gFiIdYlnkt

​The GOP legislation prohibits automatic and same-day voter registration in federal elections; requires voter citizenship verification to register to vote; restricts states from sending out unrequested absentee ballots; ends ballot harvesting practice; requires voters to provide ID for absentee voting and in-person voting; ensures that ballot counting is carried out without delays and under supervision of poll watchers; requires the audit of ballot tabulation systems within 30 days after the elections, etc.

Great Vote last night by @HouseGOP against HR1! This so-called For the People Act is an unconstitutional, reckless, and anti-democratic bill that could permanently damage our republic.

​Earlier this week, ex-Vice President Mike Pence called for a state-based election reform “that will protect the integrity of the vote for every American” in his op-ed for the Daily Signal. The vice president acknowledged that the 2020 elections were “marked by significant voting irregularities and numerous instances of officials setting aside state election law” and urged US congressmen to reject the For the People Act.

Meanwhile, in Georgia, Texas, Arizona, Iowa, and Montana, GOP governors and legislators are pushing ahead with bills aimed at strengthening election barriers and reversing last-minute election rules changes made by Democrats before the 2020 vote. However, if the For the People Act of 2021 becomes a federal law, the states’ efforts would be overridden.

Sen. Amy Klobuchar announces that there’ll be a hearing on March 24 for the Senate’s version of H.R. 1, the For the People Act.

​Meanwhile, H.R.1’s Senate prospects remain uncertain – the Dems will need every Democratic and independent vote as well as the support of 10 GOP senators to overcome a filibuster in the upper chamber.

“If the party doesn’t pass new protections, it could lose the House, Senate, and White House within the next four years,” The Atlantic forecast on 3 March commenting on the Dems’ effort.

The Democratic Party has a narrow window of opportunity to pass the bill, notes the magazine: “Typically, the president’s party loses House and Senate seats in the first midterm election after his victory.” The media highlights that if the Dems “lose their slim majority in either congressional chamber next year, they will lose their ability to pass voting-rights reform.”

Russia to Respond to Ukrainian Sanctions in Line With National Interests, Kremlin Says