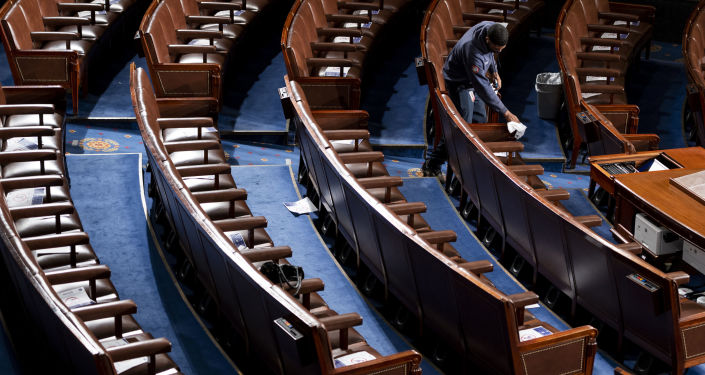 Texas Rep. Lance Gooden, the sole GOP member who voted for the George Floyd Justice in Policing Act on Wednesday, said on Twitter that his support for the bill was simply an accident, which he now moved to correct.

“I accidentally pressed the wrong voting button and realized it too late. I have changed the official record to reflect my opposition to the partisan George Floyd Policing Act,” Gooden said in a tweet that was later deleted.

But the users have managed to capture his revelation:

Every Republican except Rep. Lance Gooden voted against the George Floyd Police Act tonight. He wasn’t standing on principle though – he was just incompetent. pic.twitter.com/dUHEwWuc24

​Gooden later posted another tweet, where he said he had “arguably the most conservative/America First voting record in Congress”.

“Of course I wouldn’t support the radical left’s, Anti-Police Act,” the Texas lawmaker wrote, adding a photo of a document proving that he had changed the record to reflect his “No” vote.

I have arguably the most conservative/America First voting record in Congress!

Of course I wouldn’t support the radical left’s, Anti-Police Act.

I have changed the official record to reflect my opposition! pic.twitter.com/s7uCdlxvgO

​The police reform bill, which bears the name of black Minneapolis citizen George Floyd who died in police custody in May, passed in the House on Wednesday with a 220-212 breakdown.

Two Democrats, Rep. Jared Golden from Maine and Wisconsin’s Ron Kind joined Republicans in opposition to the bill. The act could prohibit the police agents from resorting to chokeholds, deprive them of a qualified immunity and ban no-knock warrants in federal drug cases.

The bill will now be sent to the 50-50 Senate for approval in order to end up on Joe Biden’s desk. Democrats would need support of at least 10 Republicans to see it incorporated into law, but Congressional Black Caucus (CBC) Chair Joyce Beatty has remained optimistic about the prospects of the proposed legislation.

A group of moderate Democrats previously expressed concern that the bill would go thus far with GOP lawmakers in the Senate over the language used in the proposal calling to curb legal immunity for law enforcement agents accused of misconduct. But Rep. Karen Bass, former CBC chair and the draft’s lead author, pressured for the bill to remain as is.