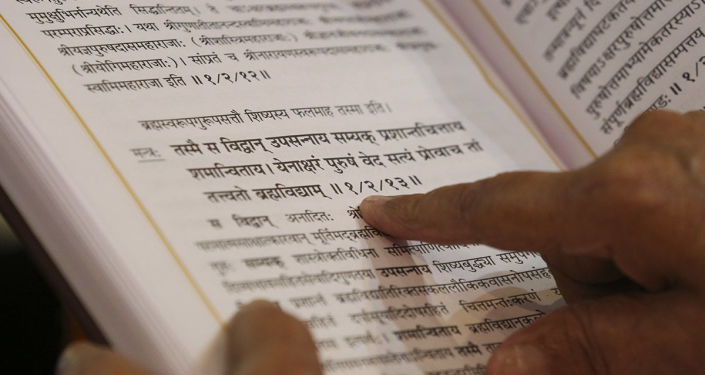 Top Muslim organisations in India have expressed strong reservations about 15 optional new courses on the “ancient Indian knowledge system” introduced in the curriculum of the National Institute of Open Schooling (NIOS), an autonomous institution under the federal education ministry.

Courses on topics such as ancient Hindu religious texts such as the Vedas, the Ramayana and the Bhagwad Gita, as well as vocational subjects such as cow-rearing and cleaning cow sheds among others, have been described as an “unwise move” by India’s top Islamic scholars’ outfit Jamiat Ulama-i-Hind (JuH).

The JuH has said that the federal authorities are trying to “force religious education” upon kids from other faiths.

“They might be optional courses, but it is just wrong to impose such religious education on young children from a different religion,” JuH’s Secretary Niaz Farooqui has told Sputnik. “We are Muslims. From a very young age, our kids are taught about the importance of ‘Allah’ in life. Now, these courses aim to obfuscate their understanding of religion by introducing other religious concepts. Had these courses been taught to grown-up students, it would have made more sense,” he reckoned.

Farooqui opines that it didn’t make much of a difference if the new courses were “optional” or not, since younger school kids from other faiths wouldn’t be able to differentiate.

The 15 new courses, which have also been made optional in government-funded Muslim religious schools, or Madrasas, are currently being offered to third, fifth and eighth grade students in three different languages, as part of the New Education Policy (NEP) of Prime Minister Narendra Modi’s government.

The NEP was approved by the federal government last year and it aims towards introducing major changes to the curriculum taught at Indian schools.

Ferdous Ahmed Barbhuiya, a cabinet member at the Students’ Union of the Aligarh Muslim University (AMU), told Sputnik that the decision to introduce these courses added a “big question mark” to the secular credentials which have been enshrined in the Indian Constitution.

“How could the government de-fund madrasas on one hand, and promote religious texts from other religion at the same time,” questioned Barbhuiya.

The student leader was referring to the decision by the Assam state legislative assembly in December last year, when it passed a law to convert more than 600 government-funded Madrasas in the eastern state to regular schools.

The introduction of these courses has been described as being “harmful to the plural traditions” of India by th eDelhi-based non-profit Centre for Education Research and Training (CERT), which is allied with Students’ Islamic Organisation (SIO) India.

“This curriculum is completely omissive of the heterogeneity of values and ethical traditions of communities inhabiting the country, thereby threatening the cohesion of plural Indian society,” said Fawaz Shaheen, the Director of CERT.

“Preferential bias towards any cultural tradition to represent all Indian knowledge violates our constitutional principles,” Shaheen added, as he echoed the concerns of other Muslim leaders on the new subjects “contradicting” the principles of secularism.

One Injured as Azerbaijan Reports Armed Incident on Border With Iran