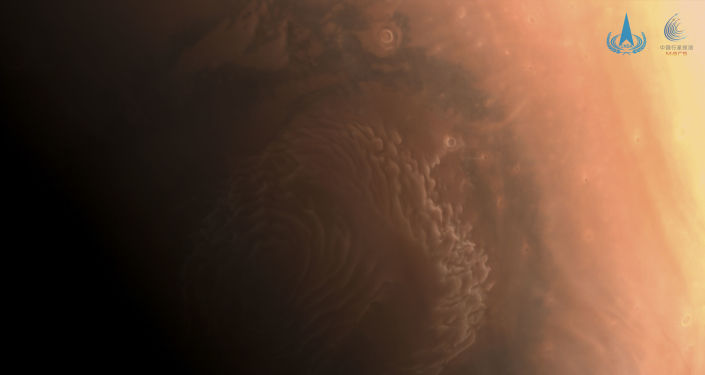 China’s first probe dispatched to Mars, Tianwen-1, has sent back its first photos from high above the planet, including a stunning color image of its north pole.

According to Global Times, the high-definition images were taken at an altitude of 330-350 kilometers above the surface and show an incredible amount of detail, down to 0.7 meters. CNSA said the larger crater is about 620 meters wide.

Another photo snapped with a different camera shows Mars’ north pole in stunning color. What appear to be cloud swirls are actually ice deposits atop sand dunes buffeted by strong winds.

Tianwen-1’s photos come after NASA’s surface rover, Perseverance, sent back a video of its descent followed by photos and sound recordings from the surface. The two spacecraft arrived in the Martian system just days apart and were joined by the United Arab Emirates’ Hope orbiter, also that country’s first.

While Hope will remain in space, Tianwen-1 is expected to drop its own rover down to the surface in late May or early June, Bao Weimin, director of the Committee of Science and Technology under the China Aerospace Science and Technology Corporation, told CGTN Thursday. The rover has no name as of yet, but it is expected to operate for about 90 days after touching down.