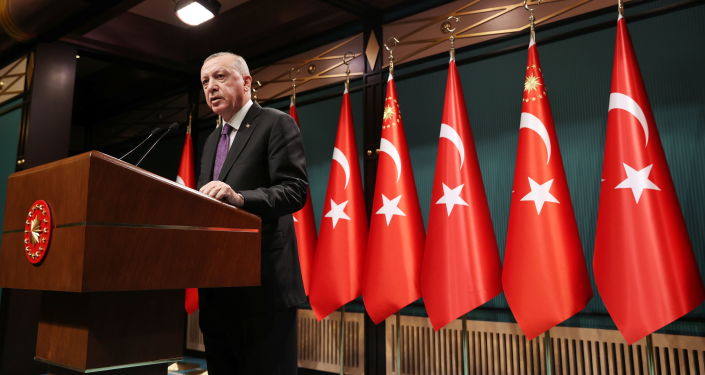 Addressing the nation on Monday, Turkish President Recep Tayyip Erdogan focused his attention on Islamophobic incidents in Europe, along with other issues such as the country’s vaccination drive, coronavirus fight, etc.

“Although European leaders negate this, statistics show an uptick in religious and racial hate crimes. As of today, ‘cultural racism’ in quite a few European countries, primarily in France, has grown into systemic racism”, Erdogan pointed out.

Relations between Turkey and France have hit an all-time low in recent months over President Emmanuel Macron’s comments on Islam and controversial caricatures of the Prophet Muhammad, apart from long-standing discrepancies between the two countries on a number of political matters like the Nagorno-Karabakh conflict, Turkey’s oil and gas exploration bid in the Mediterranean, and others.

In early October, Macron announced a programme to fight what he referred to as “Islamist separatism”. In his speech, the president said France, which has the largest Muslim population across Europe, has to wake up to the hazards of “Islamist separatism”, with the latter, he emotionally recounted, holding its laws above all others, thereby creating a “counter-society”.

The government’s plan was meant to address the interstate terrorism issue at large, following the numerous terrorist attacks France has seen in recent years.

“Islam is a religion that is in crisis all over the world today, we are not just seeing this in our country”, said Macron.

A little more than two weeks after the president’s speech, Samuel Paty, a 47-year-old school teacher, was beheaded in a Paris suburb by a Muslim immigrant, who reportedly acted upon learning that the teacher had showed his students caricatures of the Prophet Muhammad during classes on freedom of speech.

The caricatures were published by the satirical magazine Charlie Hebdo in 2015 and struck a raw nerve with the Muslim population across the world, and prompted a series of terrorist attacks in France that left 17 people dead and dozens injured.

Macron strongly condemned the murder of Samuel Paty, which he described as a terrorist attack, dubbing the teacher a hero and pledging to “continue to defend the freedom that you taught so well”.

Macron’s words in their turn landed in Erdogan’s crosshairs, spawning indignation – and massive protests –  well beyond Turkey, with Muslim minorities in chorus accusing Paris of standing in the way of Islam.

Turkey was the most vocal in urging for a boycott of French products, while President Erdogan advised Macron to pass “mental checks” instead of commenting on matters pertaining to Islam.

“What is the problem of this person called Macron with Islam and Muslims?” Erdogan asked during a meeting with his Justice and Development Party.

“What else can be said to a head of state who does not understand freedom of belief and who behaves in this way to millions of people living in his country who are members of a different faith? Macron needs treatment on a mental level”, said the Turkish leader.

Paris hit back in response, dubbing Erdogan’s statement as unacceptable and recalled its ambassador to Turkey for consultations.

Yet, Macron later moved to clarify his stance: while stressing he doesn’t personally support the contentious caricatures, he urged to differentiate between Islam and “Islamist terrorism”.

“When I decided to attack radical Islam … my words were distorted. By the Muslim Brotherhood, quite widely, but also by Turkey, which has the ability to influence a lot of public opinion, including in sub-Saharan Africa. I am not attacking Islam, I am attacking Islamist terrorism”, Macron told Al Jazeera.

Tap Water Sampled Across US Contaminated With Arsenic, Lead, Other Chemicals, Study Suggests