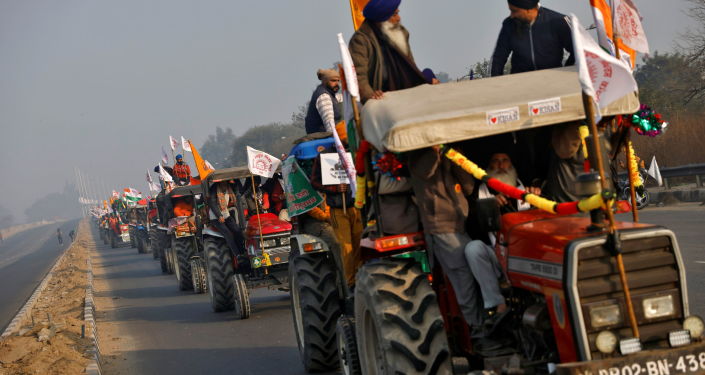 A top outfit representing 200,000 US farmers, the National Farmers Union (NFU), on Friday threw its weight behind India’s protesting farmers, drawing parallels to the American experience over the last few decades when thousands of small- and medium-sized farmers were thrown out of business due to successive administrations ceding control to the private sector.

“Our fellow farmers in India are fighting against measures that would shift authority over the agricultural industry towards corporations as well as weaken policies that sustain farmers and their communities. If our experience here in the United States is any indication, they are right to be concerned”, said the NFU, a representative outfit of farmers, fishers, and ranchers with a presence in 33 American states.

The American organisation lambasted the ongoing “corporatisation of the food system” in the US, which it said had had dire consequences for both farmers and consumers in the country, noting that India’s new farm laws were a step in the same direction.

“We have learned the hard way that fair prices and farmer sovereignty are the bedrock of flourishing rural communities and an equitable food system – in the United States and everywhere else. As [the] National Farmers Union works to secure these basic rights for American farmers, we stand in solidarity with Indian farmers as they do the same”, said the agricultural organisation.

The American organisation’s statement expressing solidarity with Indian farmers has been welcomed by many Indian netizens, with some noting that global support for the agitation continues to build despite repeated assurances by the Indian authorities that the new federal laws will boost the income of farmers.

The US National Farmers Union comes out in support of protesting Indian farmers. They too have been fighting the same market-oriented farm policies that devasted the American rural landscape, leading to severe distress forcing small farmers out of agriculture. https://t.co/zazzFwUYAZ

The NFU’s remarks followed a series of statements from the US State Department asking Indian authorities to defend the farmers’ right to protest in the face of reports that New Delhi is hunting down farmer leaders and civil society activists backing the agitation.

During a phone call between US President Joe Biden and Indian Prime Minister Narendra Modi last week, the American leader told his Indian counterpart that “he intended to defend democratic institutions and norms around the world and noted that a shared commitment to democratic values is the bedrock for the US-India relationship”.

Prime Minister Modi’s government hasn’t taken kindly to criticism from foreigners of the new farm laws, which the Indian leader has himself defended on several occasions.

Earlier this month, tweets by global celebrities like pop icon Rihanna and model Mia Khalifa, as well as environmentalist Greta Thunberg, expressing support for Indian farmers were rebuked by the Indian PM and the country’s External Affairs Ministry.

While Modi, during a speech in the federal parliament warned Indian citizens to be careful of the rising influence of “foreign destructive ideologies”, the External Affairs Ministry said it was “disturbing” that certain foreign groups were mobilising international support against India.

Besides criticism by foreign celebrities, several lawmakers from the US, Canada, and the United Kingdom have also asked the Indian government to be mindful of the farmers’ right to protest.

In response to Trudeau’s remarks, the Indian government summoned Nadir Patel, the Canadian High Commissioner to New Delhi, to lodge an official protest against the PM’s solidarity statement with Indian farmers.

Hurdling for Beginners: Golden Retriever Puppy Tries to Jump Onto the Bed